An opportunity to try out the Google Maps customisation interface (above): I took a day off on Monday for this walk along the East Devon coast between Sidmouth and Beer (unfortunately minus Clare, who isn't at all keen on the heat). I've walked this section several times before, but never in full summer. Also, as I had uncertain exploration plans en route, I took a 'lite' version that starts at the Donkey Sanctuary - bypassing the initial 500ft ascent from Sidmouth and the two equally high descents-ascents at Salcombe Mouth and Weston Mouth - and follows inland lanes through the hamlet of Weston, before heading south to join the South West Coast Path.

At half-past nine it was fresh and breezy in Sidmouth. In summer, there's a free minibus, the Sidmouth Hopper, that goes hourly to the Donkey Sanctuary, which is at the head of Weston Combe, one of the major valleys cutting to sea level. Heading east across the building complex takes you to Slade Lane, which leads through Weston, and on to Grammar Lane.

Weston is one of those 'pseudomorph' hamlets largely composed of agricultural cottage and barns converted to upmarket homes. The most interesting feature I could see from the road was this ruined façade, the remains of Weston House, a mansion that was destroyed by fire in the early 1800s.


It is necessary for a carriage to go round the head of the valley by Slade, in order to reach Weston House, the ruins of which are seen at a distance. This mansion, when' the property of Stuckey Bartlett, Esq., was consumed by fire, and has never been rebuilt. The author went over with some school-fellows the next day, and burnt the soles of his shoes among the still smouldering ruins. He brought back a mass of lead, which had run off the roof in a moulten state, and had formed itself into a heap on the ground, where the drops had cooled as they fell. The marble mantel pieces, burnt into lime, could be easily broken with the hands, like a biscuit.
-  p.89, A new guide to Sidmouth and the neighbourhood, Peter Orlando Hutchinson, 1857

About a mile from the Donkey Sanctuary, a side road signposted "Weston Cliffs" leads south, turning into a track across a field that meets the clifftop coast path.

Today I particularly wanted to check out the coastal section a short walk eastward, from where the Coast Path skirts a shallow combe, Littlecombe. Here, in the section called Berry Cliff, Cretaceous crags overly Triassic rocks, and their interface has created a bench of sloping land half-way up the cliff, that was used historically as farmland ("plats" - see, previously, Dunscombe: Spring is in the air). The Branscombe Project has a nice annotated series of old postcards of the area, including this one of the plats:

Nowadays, this land is completely overgrown, creating the characteristic undercliff terrain of steep temperate 'jungle' interspersed with fallen blocks - but, unusually for such complicated land, this undercliff is dotted with small buildings used as holiday chalets and retreats. Some are clearly newly-made, others are converted farmers' sheds ("linhays"). See Google Maps: 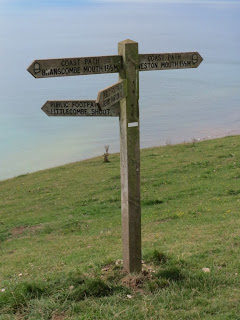 The Devon County Council rights of way map shows a couple of rights of way down through this undercliff, as well as a number of unofficial paths; there are also a number of blind alleys that either lead to impenetrable undergrowth or end at locked gates. It's a fascinating labyrinth; I could spend days exploring this.

Probably the easiest access routes are the clearly signposted descent to Littlecombe Shoot, and the very obvious foliage 'tunnel' at the point where the Coast Path joins woodland track.


I had hoped to follow one of these low-level undercliff paths and rejoin the Coast Path further east, but I ran into so many dead ends that, time being limited, I eventually decided to return to the clifftop. I did, however, explore some of the descending paths from the other entry point where the woodland starts. As I've said before, these places give me a strange sensation of continuity, both geographically and in time: the geology, terrain, vegetation, even the smell and feel of the air, are so like the Isle of Wight undercliffs of my childhood. 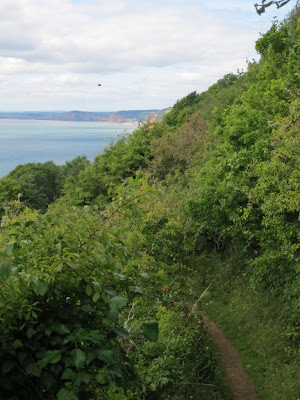 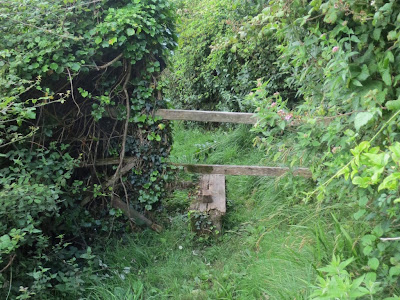 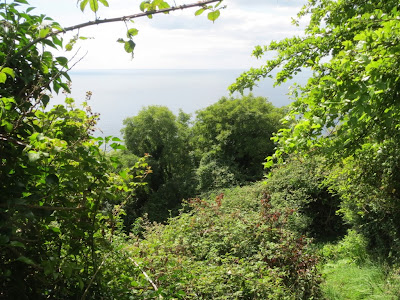 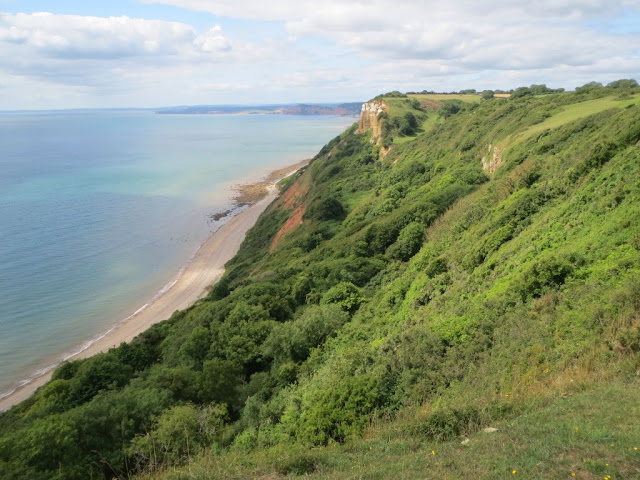 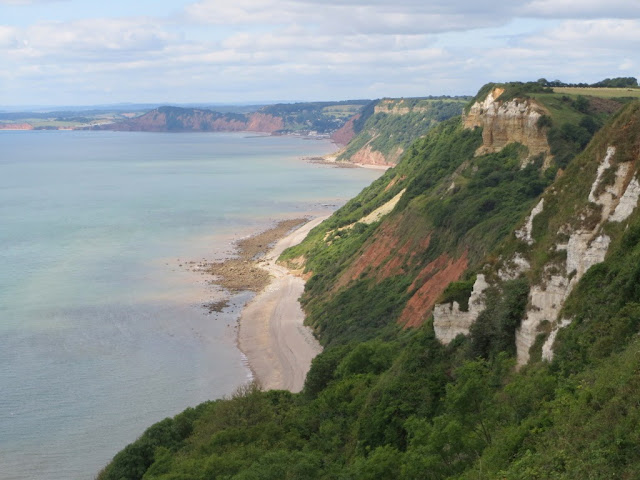 As you reach the end of this section, the view back toward Sidmouth is a delight. These green-cloaked trii-coloured cliffs are among the most beautiful in the country; I have come to love living in Devon.