Dunscombe: Spring is in the air

Yesterday it started out misty, but the sun burned through by lunchtime to make a fresh warmish afternoon, the first of the year. I went on a walk near Sidmouth with Ralph (of Wayland Wordsmith). The landscape here is the "combes" - deeply-incised valleys - that cut down to sea level along the coastline between Sidmouth and Beer, East Devon. The South West Coast Path runs along here, and it's one of its most strenuous sections, with several 500-foot ascents and descents.

We didn't do all of this section, just a circular walk taking in three combes. We went from Salcombe Regis down the combe to Salcombe Mouth, eastward along the beach via the promontory called Hook Ebb as far as the next stream outlet, Weston Mouth, then up to the clifftop and back to Salcombe Regis via Lincombe, a third combe that doesn't terminate at sea level. It doesn't sound like much, but the beach section is quite hard work, especially across the flint rubble at Hook Ebb, and it's a stiff 500-foot climb up Dunscombe Cliff from beach to clifftop.


Geologically, the coast section here is getting interesting. At the western end of the Jurassic Coast, "Jurassic" is a misnomer: here, just west of Sidmouth, the cliff base is Triassic, but it's topped by an 'unconformity' - the Jurassic is missing - with overlying Cretaceous Greensand and Chalk  The beach at Hook Ebb has a collection of slipped material including Triassic rocks, with pretty veins of gypsum, and a variety of Cretaceous rocks such as flints (which forms much of the beach) and chalk with fossils. 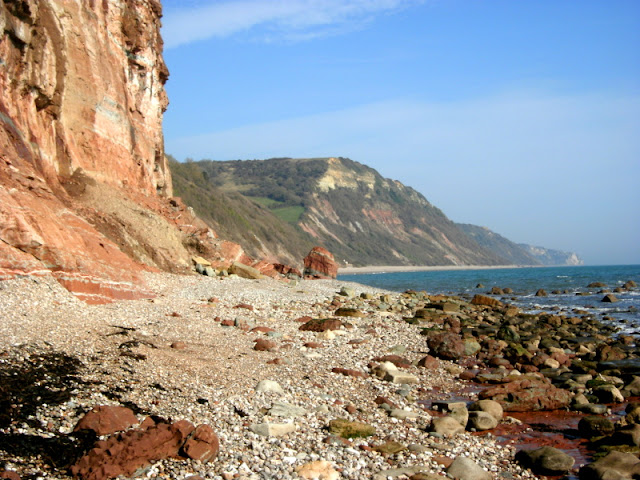 One feature of the geology is that in places the upper surface of Triassic rocks forms a sloping ledge below the Chalk crags, Rempstone Rocks. Historically, this south-facing sheltered land was used as fields - 'plats' - for raising early vegetables (see previously Under the cliffs again) and one such area, Weston Plats, has been cleared and preserved by the National Trust. It's a beautiful and relaxing place.