The Three Old Maids of Lee 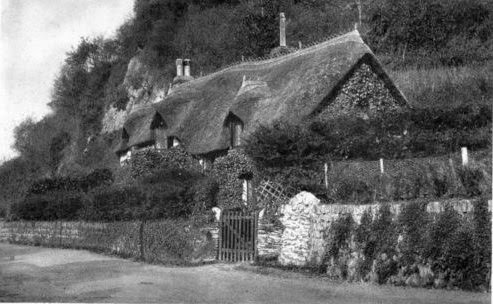 This is Old Maid's Cottage, Lee, near Ilfracombe - subject of a large number of historical postcards - which turned up as one of the Mystery Devon images locations in a recent Devon History Society post. The house still exists, as what looks like an extremely pleasant holiday rental.

The house has become associated - for no clear historical reason I can find - with a piece of Victorian doggerel by the lawyer, author, lyricist and broadcaster Frederic Edward Weatherly, an incredibly prolific songwriter.


The Bird in Hand
(The Three Maids of Lee)

Although now it's chiefly known as a poem, it was published as a song in 1881, set to a polka tune by Joseph L Roeckel. To modern sensibilities, it's excruciating in the sexism of an era that ridiculed women who remained unmarried by accident or choice, and assumed they'd be desperate for anyone who came along - while the male equivalent would be respected as a 'confirmed bachelor'. However, it became an instant hit as a comic ballad; newspaper archives find it was being sung at soirees and concerts from Christmas 1881, and it continued in popularity for a few decades.


In case the score cover doesn't make it clear its horrible subtext, here's how to stage it:


The song of the "Three Old Maids of Lee" makes a charming little set of tableaux, very easy to arrange. Three pretty girls are necessary. They are seen in the first scene in eighteenth-century dresses, sitting in a garden. In the second scene, three lovers are looking over the wall at the girls, who turn haughtily away. The third scene shews the same girls fourty years after, sitting knitting—and with a cat and a parrot and any other old-maidish detail that can be thought of. One must wear spectacles.
- Tableaux Vivants. How to arrange them. By Mabel Collins, The Derby Mercury, December 19, 1900.