Yesterday I took a closer look at the remains of Weston House, which is a few minutes' walk from the Donkey Sanctuary at Weston, near Sidmouth, East Devon. Given general trends either to demolish or to renovate derelict buildings, it's unusual to see the extant remains of a house ruined in a fire nearly two centuries ago. 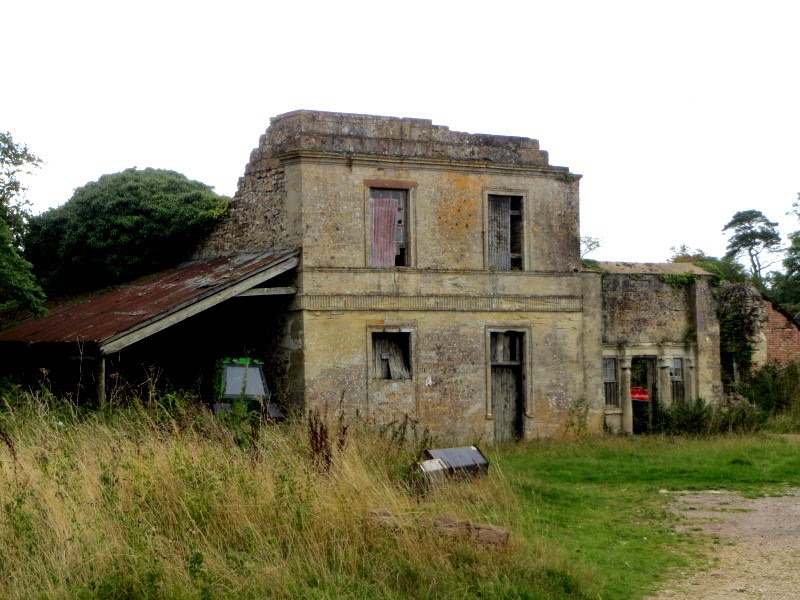 The Sidmouth diarist and artist Peter Orlando Hutchinson recalled the circumstances, if not the exact date, of the destruction:


It is necessary for a carriage to go round the head of the valley by Slade, in order to reach Weston House, the ruins of which are seen at a distance. This mansion, when the property of Stuckey Bartlett, Esq., was consumed by fire, and has never been rebuilt. The author went over with some school-fellows the next day, and burnt the soles of his shoes among the still smouldering ruins. He brought back a mass of lead, which had run off the roof in a moulten state, and had formed itself into a heap on the ground, where the drops had cooled as they fell. The marble mantel pieces, burnt into lime, could be easily broken with the hands, like a biscuit.
-  p.89, A new guide to Sidmouth and the neighbourhood, Peter Orlando Hutchinson, 1857 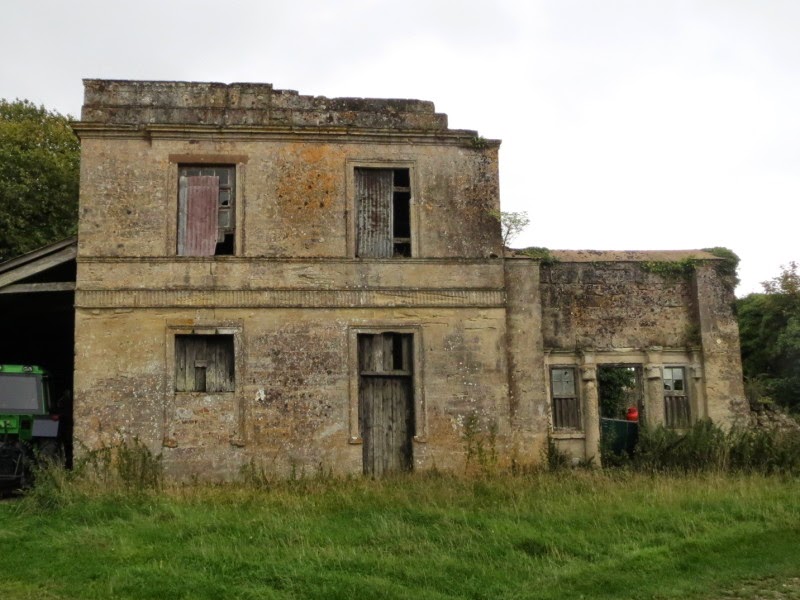 The house was a villa built by John Stuckey, a magistrate and major landowner in the parish of Branscombe. He died aged 91, in 1810, the then oldest magistrate in Devon; there's a glowing memorial inscription in Branscombe Church:


Sacred to the Memory of / John Stuckey of Weston Esqr - / the only surviving issue of Robert Stuckey Esqr - and Mary his excellent wife / the sole daughter and heiress of William Bartlett of Hole in this Parish Gent. / His Superior Talents, elegant accomplishments / and many estimable Qualities, amply fitted him for the most refined Society, and his knowledge in the Laws of his Country ; highly qualified him for the very important Duties of a Magistrate, which he discharged / with the greatest independence and integrity, and with consummate Ability, and though advanced Years / and their Infirmities, occasioned his retirement from the World / yet he preserved to the last, those active Powers of Mind and Memory, for which he had been so eminently / conspicuous through Life. / He died unmarried on the 26 th day of January 1810, aged 91 years. /

This Monument was erected by Barnaby John Stuckey Bartlett his Relation and sole executor, / In Testimony of the most grateful and affectionate Regard for his Memory. /

But the parish register has this rather snarky entry:


He died possessed of vast worldly property which, after he had long possessed without enjoying and without using, he was at length constrained to leave to others. Buried 3 February.
- Thomas Puddicombe, Brancombe parish burials register, quoted in A Guide to the Church of Saint Winifred, Branscombe, Ronald Branscombe, 1996

However, the objectivity of this is uncertain, as it seems there was no love lost between the Rev Puddicombe and John Stuckey:


In a letter written in 1801, by John Stuckey, of Weston, to his cousin, Thomas Langdon, my great grandfather, he is then spoken of, "Our Methodist raving, ranting preacher, Puddicombe, is become the most intolerable scoundrel that ever a parish was cursed with”
- FEW Langdon, Devon Notes & Queries, Vol. II, Jan 1902 - Oct 1903, page 37

Popular or not, Stuckey was astonshingly rich, and left a large portion of his estate, including Weston House, to the abovementioned Barnaby John Bartlett (possibly a cousin):


John Stuckey, esq. 95. He has left the bulk of his fortune, above 6000l. per annual, to his relative, B. Bartlett, esq. of the General Post-office, nephew to Mr. Palmer, of Bath. Mr. Stuckey has likewise left 3000l. per annum to Vincent Stuckey, esq. of the Treasury … Mr. Latouch and Mr. Stuckey, of Weston house, near Sidmouth, who died on the same day, are said to have possessed property to the amount of nearly a million sterling.
- The Monthly Magazine, Apr 1, 1810

Pursuant to John Stuckey's will [ref], Bartlett took the additional surname Stuckey - becoming Barnaby John Stuckey Bartlett - and in 1810 was granted a Royal license "to take the surname and arms of Stuckey, and to bear the arms of Stuckey quarterly" (ref: Visitation of England and Wales Notes: Volume 2 1897, page 84). He died aged 79 on March 17 1847 at Milton, near Gravesend. The Gentleman’s Magazine records “By his death various valuable estates in Devon and Somerset devolve on JC Langdon, esq. of Chard, one of the firm of Stuckey’s banking company (GM, May 1847). 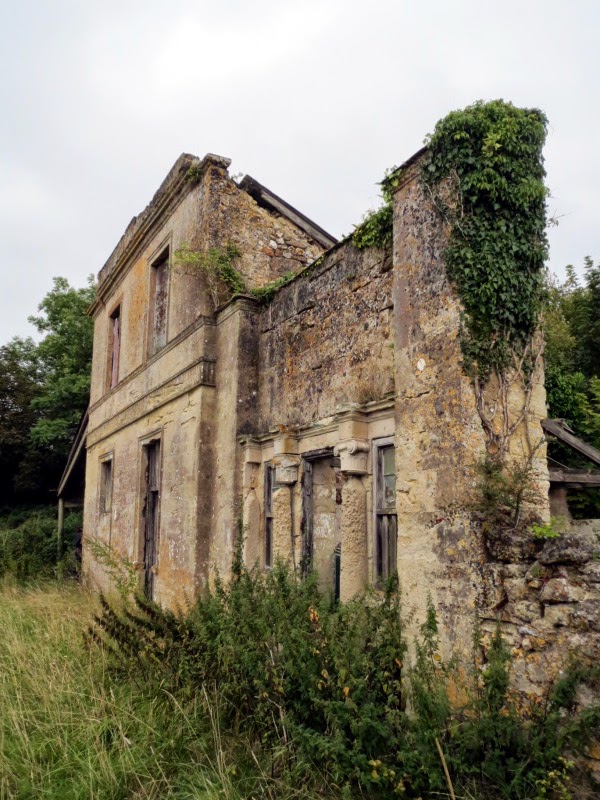 It's not known precisely when Weston House burnt down. As mentioned in a dramatised talk by Barbara Farquharson and John Torrance, Visitors to Branscombe, the Branscombe historian Elijah Chick wrote that the fire was around 1810, the house "said to have been destroyed by a natural son of the Stuckey just then dead, in his rage on discovering that he could not inherit the property". The story's implausible, however, because Chick's chronology is wrong, matching neither Hutchinson's account of visiting the day after as a schoolboy (he was born in 1810) nor other references to the house's later existence (for instance, a list of charity subscribers in Trewman's Exeter Flying Post for June 24, 1824 refers to B.J. Stuckey Bartlett, Esq. Weston-house, Branscombe). Mid-1820s seems reasonable; it was well before the 1838 accounts of Stirling and Mogridge:


Mr. Stuckey built a handsome Grecian villa; but being destroyed by fire, many years ago, and never renewed, it now exhibits a solitary ruin.
- The Beauties of the Shore; Or, A Guide to the Watering-places on the South-east Coast of Devon, DM Stirling, Roberts, 1838, pages 105-106


J. Stuckey, Esq. erected a handsome mansion, in the Grecian style, which was bequeathed to the present possessor, J. Bartlett Stuckey; a few years since it was completely gutted by fire, and nought save the bare walls remain, which yet appear in a good state of preservation. Desolation seems to reign over the place, the court-yard is overgrown with weeds; altogether it forcibly reminds one of the beautiful and pathetic lines of Ossian.
“I have seen the walls of Balclutha; but they are
“desolate.—The fire hath resounded within the walls,
“and the voice of the people is now heard no more.—
“ The stream of Clutha is removed from its place by the
“fall of the walls—The fox looked out of the window;
“the rank grass waved round his head. Desolate is the
“dwelling of Moina; silence is in the house of her
“fathers.”
- A Descriptive Sketch of Sidmouth, Theodore Hands Mogridge, J. Harvey, 1838, page 130

The Spectator mentioned the villa in 1905:


In the next combe is a monument of past ambition in the burnt ruins of Weston House, which if it had remained Weston Farm would doubtless have been rebuilt and flourishing. In that remote spot the owner, some two centuries ago, rebuilt his ancient home in the strictest form of Italian art, though on a modest scale (for large houses did not form part of the ambition of the old knights of Devon). He added a mansion to his farm, in a place so remote that he alone and his household could have enjoyed the sight of it on most days of the year. It now stands roofless and burnt, its fine piers without gates, and its Grecian mouldings injured.
- Seaside Farms, The Spectator, 28 January, 1905

There are signs of the villa's shell having been adapted for storage, and one side currently has a lean-to for a tractor. A closer look shows traces of its former splendour in the fluted frieze and the nice little Ionic columns adjoining the side door and windows. 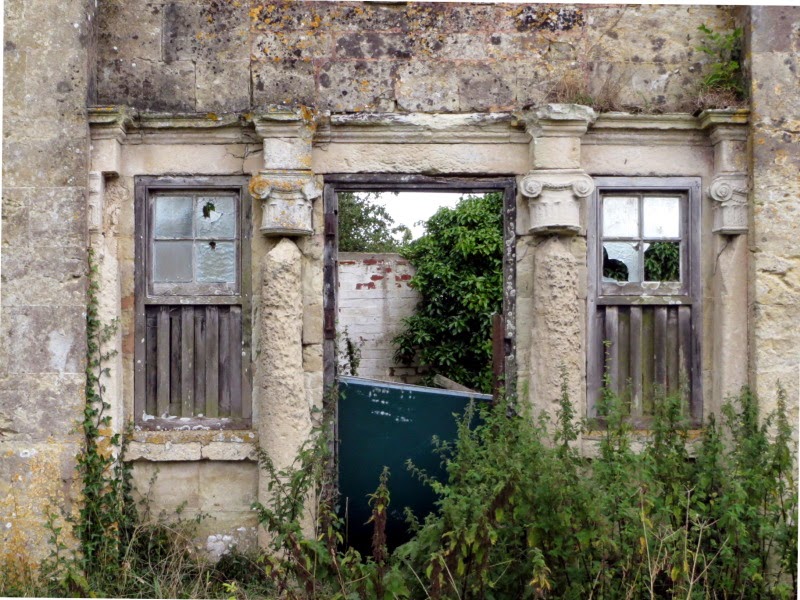 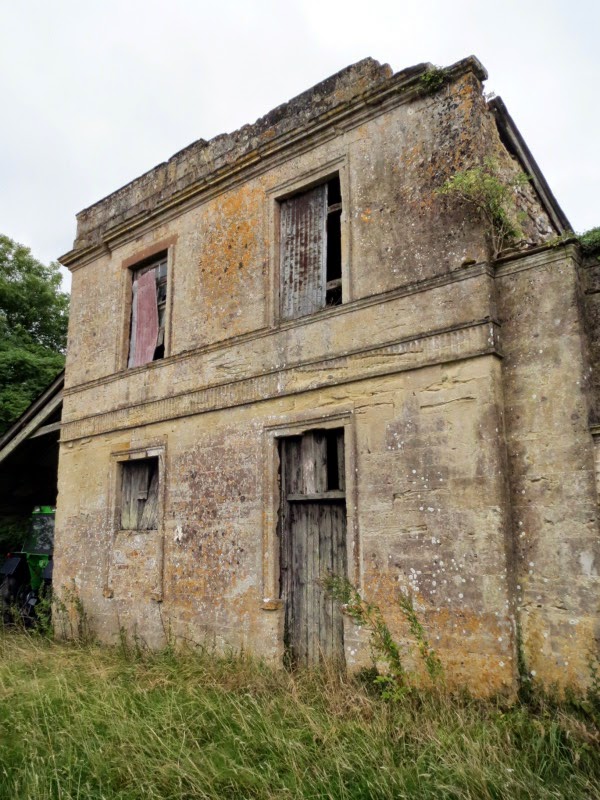 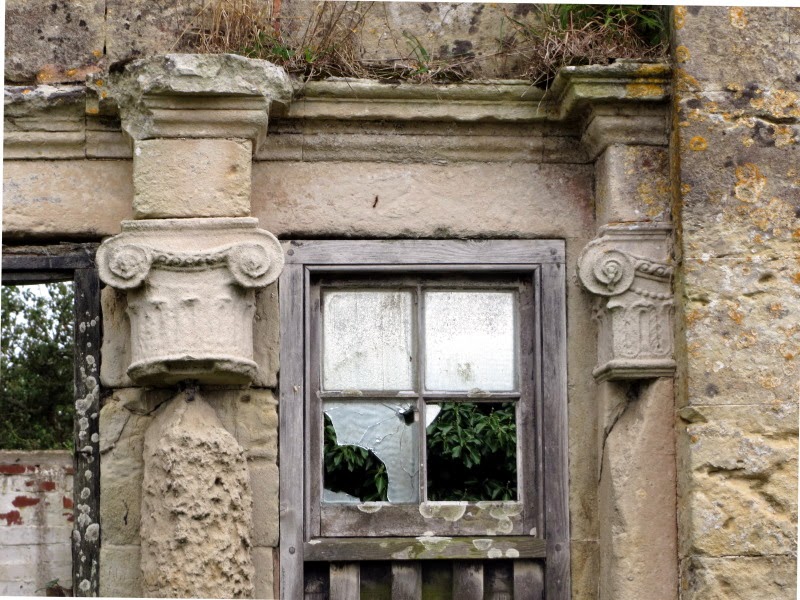 The ruin is visible from Grammar Lane, the road from the Donkey Sanctuary toward Branscombe, where it passes through the hamlet of Weston. Note that it is on private land - Lower Weston Farm - so don't go rummaging around the site.