The Temple and Tower at Exmouth

If you're in the area of the Imperial Hotel at Exmouth, Devon - on Alexandra Terrace, or its junction with Morton Road and the Esplanade, or the Clock Tower on the Esplanade - you can see an unusual neo-classical building in the grounds of the hotel. This is the surviving member of a pair of Grecian follies built in 1824.


The most detailed existing description of the building in its original form - a miniature of what used to be called the Temple of Theseus, in Athens - is in the previously-mentioned Webb/Everitt's Memorials of Exmouth. (Temple Road is the old name of Alexandra Terrace).


The same contractors that built the above Chapel also built and in the same year (1824) for a gentleman called Kendall, two little classical Temples, on the open ground between the Beacon and the river. One of them, which stood till recently near the present entrance-gates of the Imperial Hotel, was a copy of the Temple of the Winds at Athens; the other, which in a corrupted form still remains on the Temple Road, was an exact copy of the Temple of Theseus, at Athens, as it existed at the period of the greatest refinement in Greece. A Mr. Ward, who afterwards bought this little Temple, spoiled it by putting two bay windows into the western side of it, and sticking on it two lateral appendages. But in its original design it was a double prostyle Temple of the Doric order, and of a rectangular form, with hexastyle porticoes at each extremity, and columns resting on steps forming a continuous base, instead of the pedestal adopted by the Romans. Not being a peristyle, its unadorned sides served only to heighten the effect of its incomparable facade. The pediments, perhaps, might have been more flattened, and the roof consequently more concealed, but the deformity of the latter has been partially hidden from view by fans or shells arranged on the ridge and on the cornice around the entire building. The material of the building is white freestone, retaining its colour, and impenetrable to the corroding effects of the weather. The roofing is of copper. Models of classic Temples of old Rome and Greece form a portion of the attractions of museums and exhibitions. It is a pity, therefore, that when good and large models like the above are built as so great an expense, that they should be spoiled or destroyed. The proprietors of the Imperial Hotel would be doing a good work, and would add to the beauty of their grounds, if they were to restore the yet remaining Temple to its original purity of form. The flatness of the ground surrounding the Hotel is greatly relieved by this pretty little edifice.
- pages 56-57, Memorials of Exmouth, compiled by W. Everitt, Part I, 1883 (Bodleian Alpha System No. 014715475).

(The above temple used to be called the Thesion, or Temple of Theseus, but is now known to be dedicated to Hephaestus, and is called the Temple of Hephaestus or Hephaisteion).

As to the other structure, "Temple of the Winds" is a historical misnomer that's propagated down subsequent descriptions. It was actually a copy of the Tower of the Winds (aka Horologion of Andronikos Kyrrhestes), an octagonal columnar building whose ancient Greek original was for the purpose of timekeeping.

There are few depictions of the Tower in art, but a very clear 1824 sketch by Charles HJ Mayo shows precisely where the Exmouth copy was: at the base of the cliff as it begins to rise just below the western end of The Beacon, more or less where the modern mill-wheel and fishpond is. The house above, with its rounded doorway and bay window, is still recognisable - and commemorates the tower's former existence with its name, Temple Winds (see the Blue Plaque).

The cited CultureGrid page is worth visiting, as it links through to several variants on the image, including one in colour. The Tower of the Winds makes a very small appearance (detail below) at the centre of James Fidlor's c.1825 view of Exmouth (RAMM 2/1931/2); more on this image later in the article. 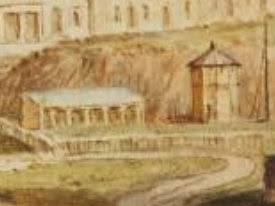 The 'Temple of Theseus' is much more represented in art: for instance, in Francis Danby's 1826 watercolour of Exmouth, Conrad Martens' The Beacon. Exmouth, and William Henry Hallett's View of Exmouth from the Beacon Walls  (c.1850). These are all findable via the LiCCo project's Historical Paintings of the Exe Estuary page, compiled by the Exmouth Historical and Archaeological Society (click the Slideshow link for high-resolution images). 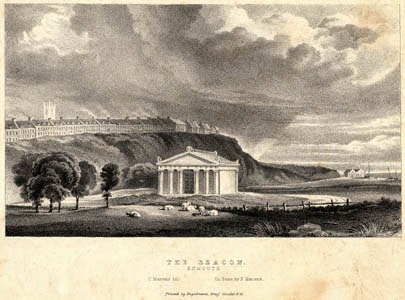 The Beacon. Exmouth / C.Martens delt.; on stone by F.Martens; printed by Engelmann, Graf, Coindet & Co. Low-resolution image from Devon County Council Etched on Devon's Memory site (SC1091B). Its size appears exaggerated, as it is in William Spreat's Exmouth from the Beacon walks (c. 1845).


The Etched on Devon's Memory page for the Martens image has a nice description quoted from Woolmer's Exeter and Plymouth Gazette, evidently the source for the architectural detail in Everitt's account.


As the Fancy Fair has given unusual interest to the Temple at Exmouth, I am induced to give you the following description of the building, which I have no doubt will be interesting to many of your readers. An attempt was made at Exmouth by the late Mr. Kendall, of Exeter to adapt to the purpose and objects of a dwelling-house, the peculiarities of a Grecian Temple. It cannot be said, perhaps, that he was successful in this design, but in exterior, he has produced a chef d' oeuvre of art, of unrivalled excellence in its decorations and proportions. The projector did not aim to create new combinations, but content to imitate closely the everlasting monuments of taste and genius transmitted to us by antiquity, he has excited universal admiration at the result, and proclaimed at once his own correct judgement, and the degenerate taste of the modern artist. The ancient Greeks had no taste for the picturesque. When the surrounding scenery gave additional splendour to there edifices, it was accidental, and not from any pre-conceived design. But the position of the Exmouth Temple has been well chosen, by one who could appreciate the effect of a beautiful perspective. It stands alone at the mouth of the Exe, fronting the sea, instead of the bank of the river, as was usual with ancient temples in a similar situation. Resting on an artificial mound, it commands a combination of every landscape beauty in nature, removed a little, yet still too near, those wretched odious piles of brick and mortar, which disfigured this celebrated watering place. It is at once the glory and shame of Exmouth, of which the climate is well calculated to display architectural excellencies.
<part duplicated in Everitt snipped>
- Woolmer's Exeter and Plymouth Gazette, for the west of England; or, public advertiser for Devon, Cornwall, Somerset and Dorset. Exeter : E. Woolmer and Co, Saturday October 12th 1833 Vol XLII No 2180. p. 3a.

The above description refers to a charity event in October 1833:


EXMOUTH FANCY-FAIR.—This Fancy-Fair was held on Monday week last in the Temple Grounds. Awnings were placed round that elegant building the Temple, erected by the late Wm. Kendall, and now occupied by the Rev. Edward Gattey, and the stalls were tastefully decorated wth flowers. The attendance was both numerous and fashionable, and the total receipts amounted to around £170.
- Births, Deaths, Marriages and Obituaries, Trewman's Exeter Flying Post or Plymouth and Cornish Advertiser (Exeter, England), Thursday, October 17, 1833; Issue 3545, 19th Century British Library Newspapers.

Whether you define the tower as a temple or not, the two follies were mentioned as highlights of Exmouth in subsequent regional guides. For instance:


... on the western beach are two pleasing specimens of Grecian architecture, in imitation of the temples of Theseus and the Winds, at Athens.
- Exmouth, A Topographical Dictionary of England, Samuel Lewis, 1833

The Tower of the Winds is no longer with us. It was demolished c.1870 (some sources, such as the Blue Plaque, specifically say 1868), which coincides with the opening of the new Imperial Hotel near the seafront. Whenever it was, the building certainly wasn't mentioned in the publicity for the hotel launch, which just refers to a single temple.


EXMOUTH.—The Imperial Hotel at Exmouth is to be opened on Thursday. It has been built by a company headed by the Hon. Mark Rolle, in Temple Fields, near the beach.
…
“The Temple,” an old building near the hotel, is to be converted into a tap, and approached from Temple-road.
- District News, Trewman's Exeter Flying Post or Plymouth and Cornish Advertiser (Exeter, England), Wednesday, April 21, 1869, 19th Century British Library Newspapers.

There's a nice image c.1950 of the remaining 'Temple of Theseus' in the Devon County Council Local Studies collection. It shows clearly the added bay windows (which have since been removed) and one of the "lateral appendages" that Everitt criticised. There's another image - EXM00021 - showing a close-up of the frontage.


1824. Originally a reproduction of The Temple of Theseus at Athens. One of 2 summerhouses (the other, now demolished, was a copy of the Erechtheion) built for William Kendall. Wings and bows added later. Stuccoed, some alterations.
- The Temple, Exmouth (English Heritage Building ID: 87422).

This is intriguing, as it suggests there might have been a third temple. This listing is the sole source for the claim about the Temple's companion being a copy of the Erechtheion, and I was inclined to write it off as a mistake. But maybe it isn't. A closer look at the James Fidlor painting (detail, right) showing the Tower of the Winds shows an adjacent structure that I first took to be some kind of lean-to shed. But it does somewhat resemble the Porch of the Caryatids of the Erechtheion (below). Interesting - but it's surprising that nowhere but the 1949 listing mentions anything but the 'Temple of the Winds' and the 'Temple of Theseus', especially as there's no sign of such a structure in the clear Charles HJ Mayo drawing of the Tower.


I find I have a couple of images on file of Exmouth's Temple, taken in March 2012 on a very pleasant spring walk (see Round The Point: Exmouth). 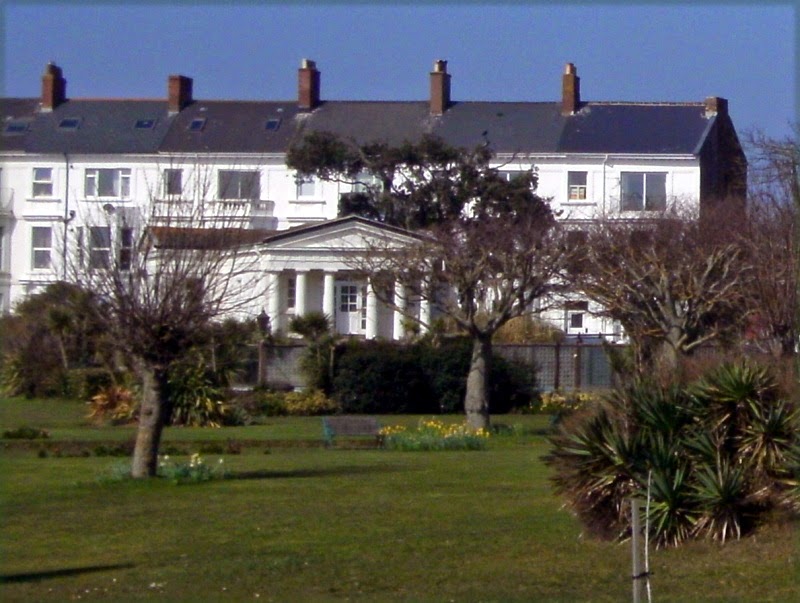 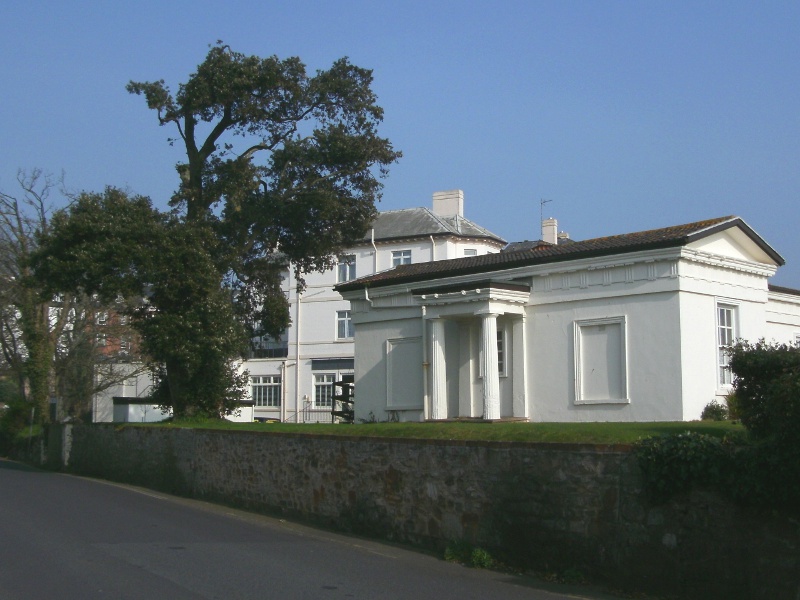 The next time we're in Exmouth, I'll see if I can get some better ones.

Update, 16th April 2015
I just noticed that Neil Rainbird posted a superb photograph of the Temple from the 1870s to the I Love Exmouth FaceBook album.

Update, 20th April 2015
We went shopping in Exmouth, and dropped by Exmouth Museum - very worth visiting. The curator and staff were extremely helpful in directing me to materials on the Temple, including AH Danby's large 1836 watercolour of Exmouth from the Beacon. (I don't know who AH Danby is, though he/she must be a relative of the Irish landscape painter Francis Danby, 1793–1861, who settled in Exmouth in later life and painted many Exmouth scenes - or else it's a mislabelling). The detail below shows the Temple before the addition of the bay windows and side wings.


Afterward we pottered over to the Imperial Hotel, where the duty manager kindly gave us permission to go into the garden to photograph the Temple, which is now used as staff accommodation for the hotel. 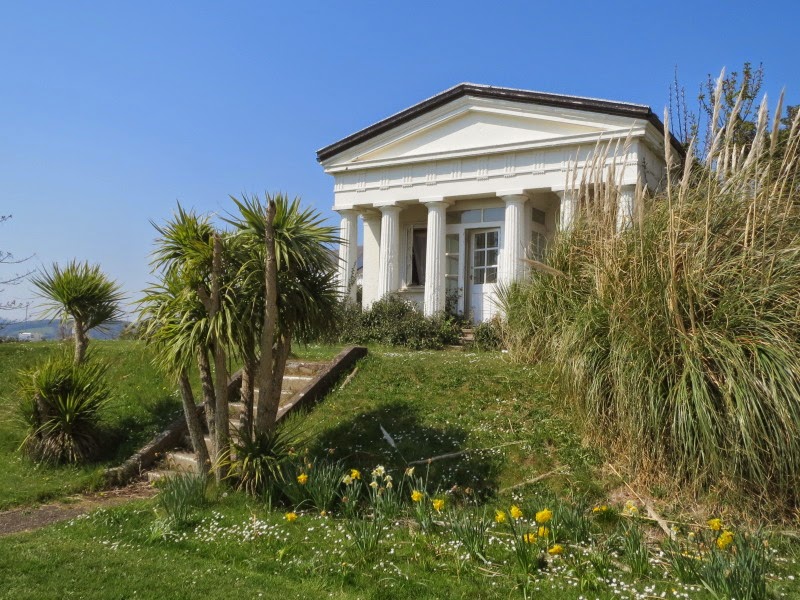 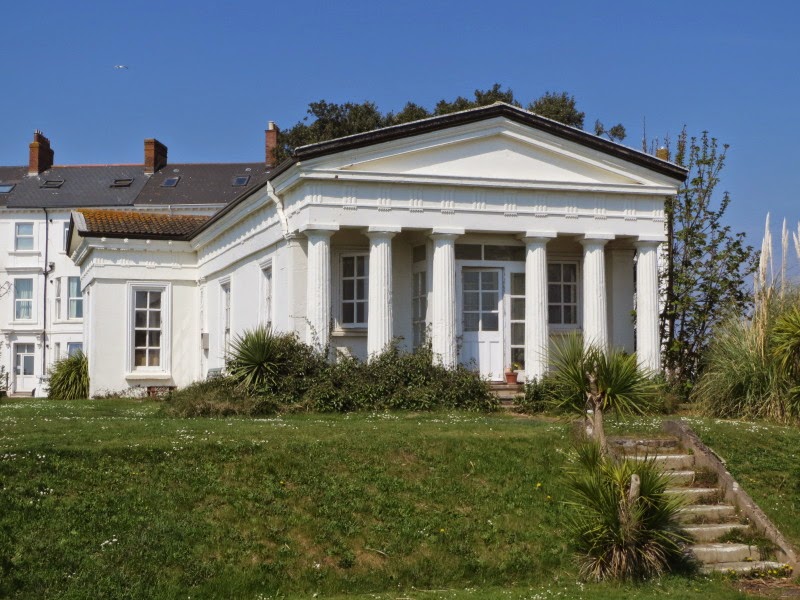 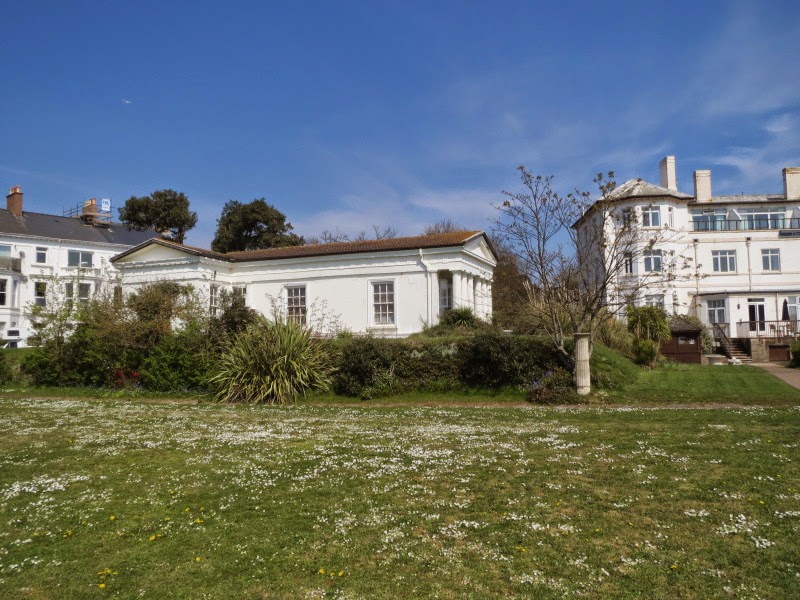