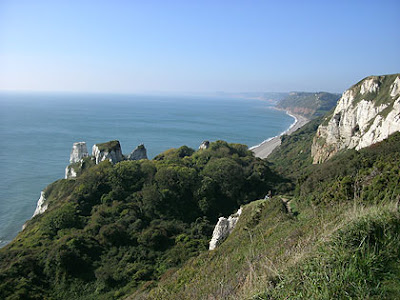 While the weather and walking mood lasted, we took a day off to walk the Beer-Sidmouth section of the South West Coast Path. I've been wanting to visit this part for a while, as it takes in yet another Undercliff (less known than the Dorset and Isle of Wight ones): the bijou but spectacular Hooken Undercliff (above).

Here a tract of chalk clifftop slipped, leaving an isolated (and now deeply overgrown) enclave between the cliffs and chalk pinnacles to seaward. Like the other southern English Undercliffs, it harbours a moist sheltered microclimate; today it smelt intensely of ivy in flower (a plant unusual in being autumn-blooming), clematis was seeding, and brambles and sloes were in fruit.  You can walk along the clifftop and admire it from above, but we took the other option of the path down through the slipped land - Under Hooken - which at the base takes an undulating route above the beach, through undergrowth on lesser slipped material, until you reach Branscombe Mouth.

The history of the Hooken Undercliff is interesting for its sheer recency, as documented in White's Devonshire and elsewhere:

A part of the high cliff facing the sea, between Beer and Branscombe, called Southdown, was the scene of a great landslip in 1790, when upwards of ten acres of land sunk down about 250 feet.
- History, gazetteer, and directory of Devonshire, William White, 1850


Woodward and Ussher's The Geology of the Country Near Sidmouth and Lyme Regis dates it more precisely to March 1790, quoting George Roberts (the historian of Lyme Regis) saying that two years before a fine stream had ceased to flow at the site, and that cracks had appeared long before the catastrophe. See the Geological Conservation Review for a detailed geological description of the site. This extract gives a graphic account of the event:

... in the middle of the night, a tract of from seven to ten acres, ranging along the brow of a steep cliff immediately overhanging the sea, suddenly sank down from 200 to 260 feet, presenting a striking group of shattered pinnacles and columns of chalk entangled with the sunken fragments of the fields thus torn away from their native site; the remains of hedges still traversed these fragments, and a stile was seen undisturbed on the summit of one of the subsided columnar masses. The subsided mass pressed forward into the sea … fishermen relate that points on which they had laid their crab-pots beneath the water, and over which they had sailed the night before … were raised … on a reef at a height of fifteen feet in the air
- W Dawson (Civil Engineer of Exeter) et al, 1840 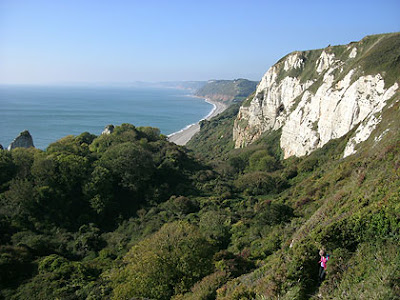 See here for another geological account, which notes that a great deal of fallen material from the slip has been eroded by the sea. See the Westcountry Studies Library image - Rocks at Branscombe (1819) - which shows a deal of now-disappeared rock to seaward of the present-day pinnacles. Another interesting point is that it wasn't always as overgrown as today; we did notice one or two remnants of stone buildings in the undergrowth, and this sign of human presence is explained in Arthur William Clayden's 1906 The History of Devonshire Scenery; An Essay in Geographical Evolution: 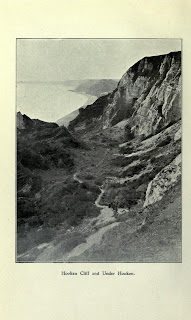 There is a beautiful walk here along the sloping undercliff through the little fields where early young potatoes are raised in quantities. Tall pinnacles of fallen blocks stand out above the greensward of Under Hooken.

There's a better copy of the image (right) here; compare the visibility of the path with that in my photo above.  I'm glad to have visited the place, as it's going to be a short-lived feature on a geological, and even historical, time-scale. See seatonbay.com for a detailed route guide.

As to the Beer-Sidmouth walk in general, it's beautiful (see the photo below) and quite varied: chalk clifftop, overgrown undercliff,  woodland, and clifftop pasture. But it's definitely the most gruelling section of the Jurassic Coast to walk, even more so than the Lyme-Axmouth Undercliff. Although the route is only about 7.5 miles horizontally, the coast traverses the edge of a plateau with deeply-incised valleys cutting the 500-foot cliff down to sea level, so there's a total ascent (and corresponding descent) of around 2000 feet. Mountaineering-wise that's not much, I guess, but it's quite a lot for an afternoon walk in East Devon (it took us about six hours, counting a break for lunch at Branscombe Mouth). My knees are going to hurt tomorrow. 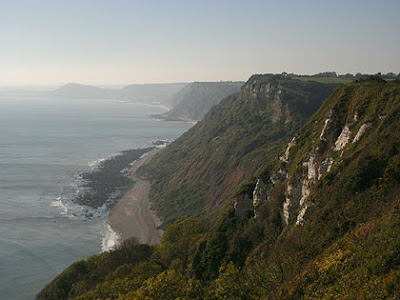 Cliffs between Branscombe Mouth and Sidmouth
- Ray
at 16:36