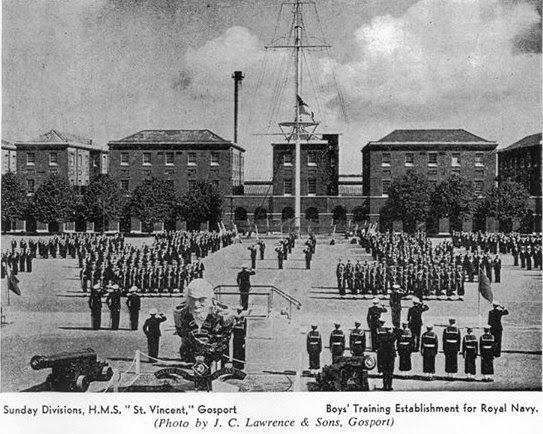 John Ptak's blog Ptak Science Books category - "History of Blank, Missing and Empty Things" - is proving surprisingly applicable. A post by Dave Burnes in the Gosport Memories Facebook group reminded me of the displays my family took me to at HMS St Vincent, the RN training establishment at Gosport - decommissioned in 1969, and now a sixth-form college. One of the highlights of the year was the annual fireworks display on the parade ground - except that I remember being terrified by the huge figure looming out of the smoke. 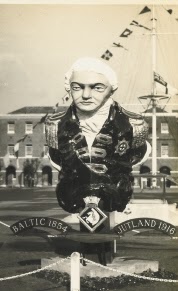 This was the figurehead "Old Jervie" (or "Old Jarvie" in some sources): the effigy of John Jervis, 1st Earl of St Vincent. The image at right comes from Rob Jerrard's maritime book reviews here. There are better images in the galleries at the HMS St Vincent Association site; in 1946 (see here) he presided over the "Ganges Gym", .in later years, he overlooked the parade ground (see here).

Apart from the facade, the historic buildings of HMS St Vincent have been demolished, and Old Jervie is no longer on the site. I'm pleased to see, however, that he's still extant, and has been moved to the nearby shore establishment HMS Collingwood. See John Oram's Flickr photo HMSCOD_011 - 4 June 2011 ('Old Jervie' - Admiral John Jervis. HMS Collingwood Open Day, Fareham).