Expanding on an aside in the previous post Ice cold in Shaldon (if you missed it, read it for context) I just collated some further detail on what sounds a brilliant event in the Valley of Rocks, Watcombe, Devon, in the days before its overgrowth with woodland. This was an open air concert party - a fête champêtre organised by the Torquay Choral Society in the early 1850s - that made use of the Valley as a natural amphitheatre.

This picturesque fete took place on Wednesday, the 28th ult, in the neighbourhood of Torquay, Devon. The site may be described as a grand amphitheatre, formed by a gigantic land-slip. On the north stands a towering precipice of conglomerate, like a bold sea-worn promontory, fissured by the storms of centuries. Beneath and around, the green-sward clothes the debris of the rocky avalanche which has rolled downward to the beach, between a second range of precipices and bold swelling hills.

The company included not only the elite and a vast assemblage of all classes from the immediate neighbourhood, but nearly an equal number from distant tows. A special train from Plymouth and Exeter brought more than seven hundred persons, whilst great numbers arrived by later trains.

For the performance of music in the open air the form of the ground was admirable. "Here," says the programme, "has Nature in her mighty workings displayed a sylvan dell, whose rocky sides faintly echo the tones which float upon the air." Ably did the Choral Society avail themselves of these advantages. Vocal or instrumental - whether in glee or madrigal or the full-toned choruses - the whole was admirable. "Foresters sound the cheerful Horn" and the "Huntsman's Chorus" were especially effective, and in character with the scene. "Hail, smiling Morn" and "Now is the month for Maying" rolled back the hours, and made the season young again. At sunset, the choir performed in admirable style the bold characteristic music of the Witches in "Macbeth," by Locke; followed by "God save the Queen," in full and enthusiastic chorus. "Good Night" formed the finale.

The scene was truly exhilarating; there were between 6000 and 7000 persons present: hosts of lovely children, with garlands on their heads, joined in the merry dance; others tripped it round the Maypole; and beneath a rock was formed the al fresco orchestra; whilst aloft upon the rocky point were performed hundreds around a gay flag.

Our Illustration is from a Sketch by Mr. Colebrooke Stockdale, who obligingly acted as honorary secretary to the Choral Society; the musical performances being ably conducted by Mr. Melhuish.
- The Illustrated London News, Aug 14, 1852, Volume 12, page 108

The next year, a repeat event was advertised in the Trewman's Flying Post of August 25, 1853. They knew how to do anouncements in those days ...

THE COMMITTEE of the TORQUAY
CHORAL SOCIETY in Anniversary of Last Year's
Fete have the honour to announce that a
GRAND MUSICAL FETE CHAMPETRE
will be held at WATCOMBE, near TORQUAY, on
THURSDAY, the 1st SEPTEMBER, 1853, commencing
at Half-past One o'clock precisely.
THE SPLENDID AND RENOWNED BAND OF
THE ROYAL MARINES
(By the kind permission of Col. Coryton) and the
TORQUAY SUBSCRIPTION BAND
will attend and perform choice selections of appropriate
and popular Music.
THE UNITED CHOIRS OF THE PLYMOUTH
PHILHARMONIC AND TORQUAY CHORAL
SOCIETIES
will sing MADRIGALS, CHORUSES, GLEES, &c.,
after which
HIGHLAND GAMES AND SPORTS
will take place, for which Prizes will be given.
Around the GARLANDED MAY-POLE Children will
twine the VARIED COLOURED WREATH  in a DANCE
of OLDEN TIMES.
At Half-past Four o'clock precisely, Choice Refreshments
consisting of Tea, &c., will be provided by Mrs. GRIFFITH'S
of Torquay, under the Superintendence of appointed
Stewards. At 7 o'clock
THE GIANT'S ROCK WILL BE BRILLIANTLY
ILLUMINATED, AND
A SPLENDID BALLOON WILL ASCEND.
None but those who have visited this locality can imagine
the surpassing beauty which nature has here displayed.
In this wild and romantic Coombe, gigantic Rocks
raise their bold heads high into the air, while at their feet
large masses lie scattered in strange fantastic forms-
the verdant slopes descending to the pebble'd shore
"where ebbing waters musically roll."
How beautiful this will appear when thousands are
assembled, studding the vale in picturesque groupes-
listening to the rise and fall of sweet harmony as the
echoes reverberate through this unrivalled Coombe- the
merry children, as in olden times, sportively gamboling in
the mazy dance - in the distance beholding the azure
bosom of the ocean, dotted with white sails, all combining
to form a scene of rare beauty and sublimity.
GOD SAVE THE QUEEN.
Tickets for the Fete, 1s. each; Children and Schools
half-price; ditto ditto with Refreshment, 2s. each; to be
obtained of the principal Book and Music-Sellers in
Exeter, Plymouth, Teignmouth, Totnes and Torquay.
W. COLEBROOKE STOCKDALE, Hon, Sec.
Torquay, 18th August, 1853.
Excursion Trains will run. Conveyances to and from
the Station.
N.B. Parties intending to be present are urgently
requested [in consequence of the large attendance
anticipated] to procure their Tickets on or before Tuesday
30th inst., which will materially assist the arrangements
and prevent any disappointment.
By order of the Proprietors, no Booths or Stalls of any
kind will be permitted on the ground.

Trewman's Flying Post carried a review on September the 8th, 1853. It was generally complimentary about the event, but with the odd sour note. One was a problem with the SPLENDID BALLOON:


The inflation of a large balloon commenced, but before it was completed the "monster" broke from its fastenings and was destroyed.

The other, more significant, was that:


The number of persons present cannot have been far short of 8,000, although, we hear, scarcely one-third of them paid for admission to the fete, the rest, to their discredit, taking advantage of a misunderstanding which exists as to the ownership of the ground, and refusing to "fork out" their "siller". We regret to state that the consequence of this disgracefully mean conduct has been that the society will sustain a loss from the undertaking.

Even without making a loss, the infrastructure for running such an event in a out-of-the-way location must have been daunting - not least, how to arrange toilet facilities for several thousand people. The Torquay Choral Society seems to have been stung by the whole experience, and didn't try this location again. A quick skin of news archives shows they moved future fetes to Luscombe Park, private grounds where presumably questions of admission fee were clear-cut.

Here's another nice image of the Valley of Rocks, from Besley's Views in Devonshire (c.1861). 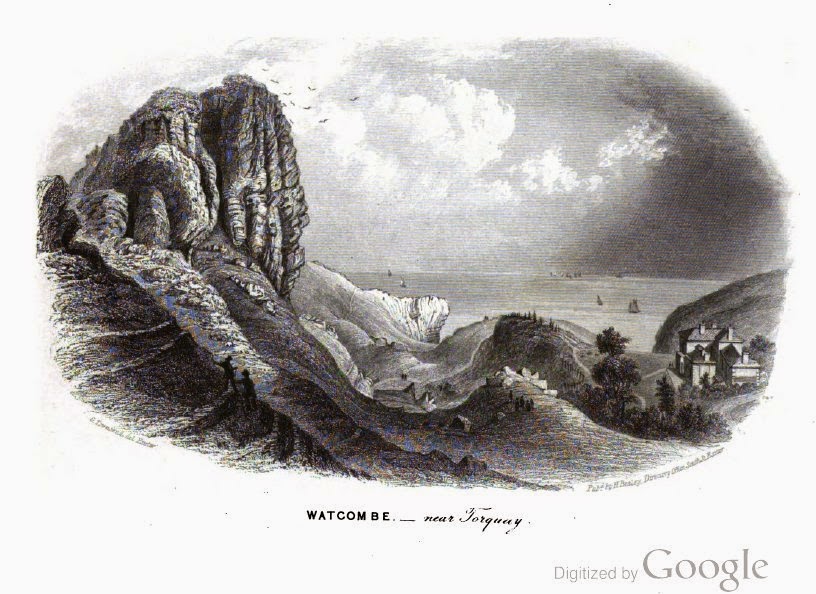 Footnote: the quotation in the advertisement - "where ebbing waters musically roll" - comes from "To Miss Talbot" (in various later anthologies rebadged as "A Calm Evening" and "An Evening Walk") a now-obscure poem by the bluestocking and probably lesbian writer, poet and translator Elizabeth Carter, from her 1776 collection Poems on Several Occasions (page 70).


How ſweet the Calm of this ſequeſter'd Shore,
Where ebbing Waters muſically roll:
And Solitude, and ſilent Eve reſtore
The philoſophic Temper of the Soul.