After my previous visit, I suggested to Clare that we could both take a day out to look at Teignmouth and Shaldon when it was a bit cooler, and yesterday fitted the bill. On very brief acquaintance, I've rapidly come to like Teignmouth's Town Centre Conservation area, a warren of slightly shabby but characterful streets with niche shops and many Georgian buildings. There's a good account of this part of Teignmouth in the Teignbridge District Council document Teignmouth Town Centre: Character Appraisal.

There are a number of artistic connections, such the plaque outside Thomas Luny House commemorating the marine artist Luny, who produced the bulk of his work while living in Teignmouth (he got into the news last year over the controversy of Teignmouth Council's expenditure on one of his paintings - see Teignmouth council's £3,000 Luny art purchase criticised). Check out another of Luny's works: Fishing Boats in Teignmouth Harbour, Devon. And there's a deal of Keatsiana: the Keats poem on Teignmouth - the one he called "some doggerel" - on the New Quay Inn, and the (perhaps alleged) "Keats House" at 20 Northumberland Place.

Over at Shaldon, we had a look at the Homeyards Botanical Gardens, a pleasant free-access garden and park on the hillside overlooking the village. On the way up, there are very nice views over Teignmouth. The garden dates from the 1920s-30s, when it was created by Thomas Rider for Maria Laetitia Kempe Homeyard, the widow of William Newcombe Homeyard, the inventor and manufacturer of Liquafruta cough syrup (he's buried in the nearby churchyard, with the word "ATURFUQIL" on the tombstone). Little of the original planting exists, but it's a very pleasant enclave; a particular point of interest is the Mrs Homeyard's castle folly. There's a Friends group whose brief is "an on-going programme of works will hopefully restore the Gardens to their original glory, for all to enjoy" - see Shaldonbotanicals's Blog.

We took a quick look through the so-called Smuggler's Tunnel to Ness Cove. Looking south-west, you can see the South West Coast Path winding up the cliff on the section that leads to Babbacombe and Torquay. I plan to walk this one soon. 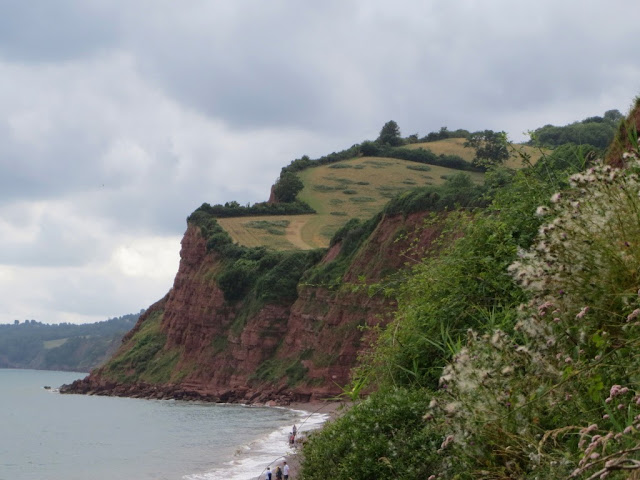