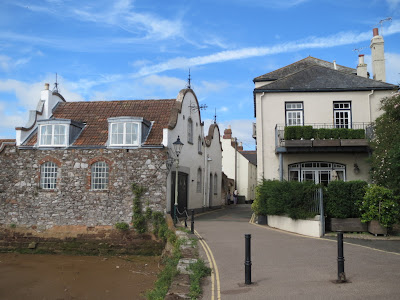 I just collated a spot of geeky history behind the buildings omnipresent in Topsham river views: the gabled riverside cottage called Wixels (above left), and the building opposite, which is divided into residences call Nail House and Nail Cellars. The connection is pretty well-known locally, but it might be of interest to readers.


Beyond the Church steps is the Nail House, the nailworks owned by the brothers Wigzell in 1850-60 but it was not a success and only had a short life. The nails were a patent, spiral-fluted type used for securing the copper sheathing of ships and a few were found when the premises were converted into a dwelling house. In one Guide to the Town the  closing of the nailworks is given as a contributory cause of its decline but it is doubtful whether this small enterprise employed very many.
- Report and Transactions of the Devonshire Association for the Advancement of Science, Literature and Art, Volumes 84-86, 1952

I don't know the precise design of the Wigzell version - they vary in pitch - but this is a spiral-fluted nail. As it's hammered in, the spiral rifling screws it into the wood, giving a very secure hold (often too secure - the things are fearsome to remove); a contemporary account describes both the pros and the cons.


Spiral Fluted Nails.
From the London Builder, No. 969.

A company has been formed for bringing into practical use the spiral fluted nails, an invention of Mr. W. [sic] Wigzell, of Exeter. Mr. Wigzell recently exhibited these nails at Devonport. Mr. John Weary, builder, Mr. Ash, surveyor of the manor, and several other gentlemen, says the Devonport Independent, were present. The inventor proved the advantages of the nail in a variety of ways; he first drove one of about 2½ inches long into a piece of 2½-inch deal to within a space little more than the diameter of the nail of the "end-grain," to show that the nail so successfully cleared its way as in no case to cause the wood to split; he next drove a nail into a piece of hard, knotty oak; he nailed two pieces of 1½-inch board together by one nail at one end, and, with a leverage of 2 feet, a strong man present had great difficulty in separating the two pieces; with a nail at each end, a wedge and several powerful blows with a heavy hammer were necessary to get them asunder. The holding qualities of the nail were exemplified by the several tests. The nails, however large they may be, or however hard the Mod on which they may be used, require no holes to be made before driving; the spiral point causes the nail to revolve as it advances. Perhaps the tenacity with which they hold in wood would be one disadvantage against their use in all purposes, especially in the nailing of floors where removal is frequently necessary for laying on gas; but this inconvenience the inventor has obviated by the manufacture of another nail, with a slot or screw head, by which it can be turned out with a screw-driver even more readily than a screw, whilst it could be driven into the flooring with less than a quarter of the labor caused by the use of screws. All present, adds our authority, seemed to concur in the great superiority of the nails over those ordinarily in use. They can be manufactured as cheaply, if not cheaper than common nails. The nails are manufactured by machines invented by Mr. Wigzell, each of which will twist at least 4000 per hour; and the plain nails now in use can be twisted by other machines, also invented by Mr. Wigzell, at the rate of 16,000 per hour. Premises have been taken at Topsham for the purpose of manufacturing these nails.
- Journal of the Franklin Institute, pp105-106, Vol XLIV, 1862


.... born in the City of London in 1831, the son of Eustace Wigzell. He was an artist and inventor. He came to Exeter in 1854 as the first headmaster of the Exeter School of Art and in 1866 became the first headmaster of the Croydon School of Art. In 1861 he formed the Patent Spiral Fluted Nail Company and manufactured this in Topsham, near Exeter. In 1866 he was declared bankrupt. In his bankruptcy examination it was stated that he had seven 'ventilators', another of his inventions, at the Greenwich works. From 1859 he had invented a gun battery, various types of nails, a double ventilator and a candle-making machine. There is evidence that he was making candles and ventilators as well as his spiral fluted nails at Topsham, but he must have had a family connection or perhaps a manufactory in Greenwich. He had a brother called Atwood who described himself as a 'practical engineer',
- Gill Selley, Woodbury Local History Society, Greenwich Industrial History, Volume 8, Issue 3, June 2005

He took out a number of patents:
Assuming this is not some unlikely coincidence of names, and the artist, school headmaster, and inventor were the same Montague Wigzell, he was quite a polymath - but perhaps one who spread his interests too thin. He was declared bankrupt - described as "late manager of the Spiral Fluted Nail Company, (limited) and now manufacturer of the patent double action ventilator" - at Exeter Bankruptcy Court on 10th April 1866, after which it seems he went back to London and subsequently headed the Croydon School of Art, and continued inventing.
I haven't read it, but there's an article on him in the journal of the Devon History Society: Montague Wigzell: Victorian artist and inventor, Selley, G., The Devon Historian, issue 73, 2006, pp10-17. As to the subsequent history of the location of his factory:


Wixels is the large dutch gabled house along Ferry Road on your way to the Passage House Inn. It was originally a sail loft and later a coal shed, In 1920 it was converted into a house, the gables added and re-named "Wixels". The name actually comes from the building on the other side of the road.
-  The Topsham Ten...continued, Exeter through the bottom of your beer glass


Hi, Just read your potted history of Montague Wigzell, an ancestor umpteen times removed of mine. You might be interested to know the brothers Montague and Atwood also had another brother, called Eustace like their father.  This brother was an inventor of steam engines, he actually equipped the Russian navy with his engines, and his Greenwich company eventually joined with Messrs Pollitt to form the Pollitt and Wigzell company.  Their steam engines powered many mills and mines in UK, one or two still exist and can still be seen under steam occasionally.

Thanks, Linda! A quick Google finds that one of the locations with a Pollitt and Wigzell steam engine is Coldharbour Mill, the working textile museum in Uffculme, Devon.