So I'd just looked at Berry Cliff and the undercliff below it. At this point, as you continue eastward, the South West Coast Path joins a woodland track through quite complicated terrain: a blade of land with steep hillside on the left; sea cliff on the right; and the top comprising weird hummocky woodland whose nature appears to be partly down to geology, and partly to long-bygone lime quarrying. You can see in this old image from the Branscombe Project what it was like before the tree cover. 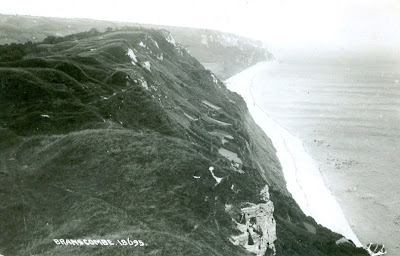 I didn't take many photos of the woods. I don't know if anyone else finds woodland difficult to photograph; the sheer depth is difficult to convey. I've found stereopairs often do the trick.

After about three-quarters of mile, the woodland starts to thin out, with views to the left down into Branscombe, and ahead to the Hooken Undercliff, and you descend steeply to Branscombe Mouth. Here's there's a shop, parking, toilets, and a cafe called the Sea Shanty with a pretty little rock garden. The cafe is surprisingly old: check out the Branscombe Project's postcard collection, which has interesting pictures of the building in 1910 in its original incarnation as a lookout and walled coal yard. It was converted into a beach café in the late 1920s by a local pebble merchant Clem Ford (before Branscombe Beach become a National Trust site, its pebbles were extracted for silica and grinding mills). Another document - Working The Stones Of Branscombe: From Flint-Knappers To Pebble-Pickers, by John Torrance - is a brilliant account of how the locale's varied geology was exploited historically, in ways still reflected in its landscape and buildings.

From Branscombe Mouth, a short climb takes you up to the small holiday park built on the site of 'plats' (sloping cliffside fields) then along a rambling undercliff path below chalk cliffs. It skirts a couple of fallen blocks, including a large one called Martin's Rock, before hitting a stiff climb through the Hooken Undercliff, site of a 1790 landslip (for history, see the previous Hooken Undercliff and beyond). This is my favourite location on the East Devon coast; on a hot day such as this, its microclimate - the consequence of this densely-vegetated gorge being trapped between cliffs and seaward pinnacles - gave a jungle-like humidity, and it smelled of the profusion of white and purple buddleia.


I've mentioned before Arthur Clayden's The history of Devonshire scenery; an essay in geographical evolution (Internet Archive ID historyofdevonsh00clayrich), but this time I was really geeky and took a print of this this 1906 view, in order to take a comparison photo from as close to the same viewpoint I could find. Even 200+ years after the landslip, the land was still open pasture, and you can just see one of the plats in the near distance. This pattern of modern overgrowth is a repeated one; it's undoubtedly good for wildlife conservation, but it seems a pity that it hides and makes inaccessible many striking landscapes. 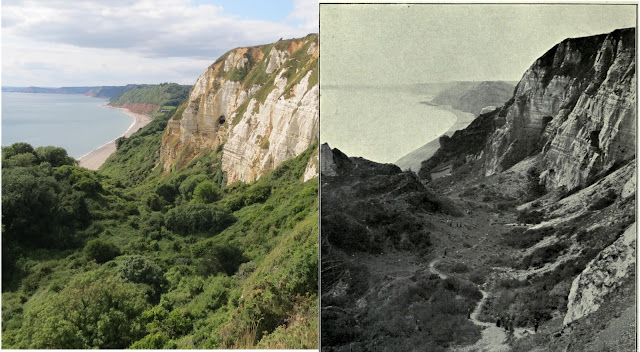 Once at Beer Head, it's an easy descent to Beer village. On the way, there are good views of the western end of the Axmouth-Lyme Undercliff, and even beyond to Golden Cap in Dorset. That's for another day ...