Although it has become something of a stereotype of the modern fantasy novel to include a map at the front of the book, the idea is far older, a classic example being the Wessex map featured in the Macmillan editions of Thomas Hardy novels. This semi-fictionalised southern England - the landscapes stay the same, but Bournemouth becomes Sandbourne, Dorchester Casterbridge, and so on - has become iconic of Hardy's vision, and there are lots of very nice books exploring the relationship between the fictional and real locations. Just skimming the shelves here, I find Desmond Hawkins' Hardy's Wessex; Kenneth Phelps' The Wormwood Cup: Thomas Hardy In Cornwall; and the Penguin reprint of Hermann Lea's two-volume The Hardy Guides, a 1913 travel guide prepared in collaboration with Hardy.
It's tempting to think of Wessex as a fully-fledged mental landscape within which Hardy wrote. Yet this is far from the truth : Birgit Plietzsch's research project Thomas Hardy's Wessex traces through successive drafts and correspondence how the unifying 'Wessex' and its frontispiece maps grew as a marketing concept that Hardy himself initially resisted. More maps, and on Hardy in general, at the Thomas Hardy Association website.
Topsham in Devon, incidentally, has a minor Hardy connection: Hardy's cousin Tryphena Sparks (with whom he may have had a romance in his younger days) married a publican here, and is buried in Topsham cemetery.

Addendum: I just ran into another related book, Hardy's Wessex Today (Mellstock Press, 1990). This is a nice little paperback, the first volume - I don't think there have been any more - in Vera Jesty's project to collate the 240 Hermann Lea photos of Hardy locations with her own 1985-1990 ones. 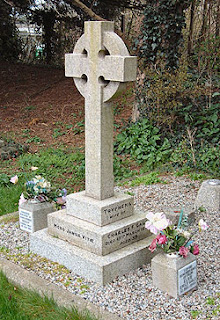 Addendum 2: today (March 21st, 2008) a friend kindly showed us where to find Tryphena Sparks' grave in Topsham Cemetery. It's in the far north corner, directly adjacent to Topsham water tower. The inscription reads "Mors janua vitae" ("Death is the gate of life" - commonly translated as "Death is the gate to eternal life") and "Tryphena / Wife of / Charles F. Gale / Died 17th March 1890 / Aged 39".
at 03:53 0 comments