Via MetaFilter: Bookshelf, a niche weblog devoted entirely to documenting creative and often bizarre bookshelf designs, along with trompe l'oeil decor, wallpapers and other imitations of bookshelves.
- Ray
at 06:59 0 comments

Strychnine - a lesser-known past

Today at the bookshop I found a little book behind the counter, Principal Drugs and Their Uses, a 1934 Faber & Faber pocket guide for nurses by A.L. Morton (a tutor from the Royal College of Nursing, not the Marxist historian Arthur Leslie Morton.

There a quite a few surprises; the book reveals the 1930s to be an era when morphine and opium derivatives were still commonly prescribed as sedatives, diamorphine (i.e. heroin) for bronchitis and various coughs, and mercury compounds (under picturesque names like blue pill and grey powder) as laxatives. Probably the scariest example, though, is strychnine: "General tonic. Prescribed in various nervous disorders. It is among the most valuable and widely prescribed drugs".

The useful property was that strychnine, in small doses, is a stimulant. This, however, led to its misuse, before amphetamines came on the scene, as a performance-enhancing drug in athletes (this use was apparently known to the ancient Greeks, but lost until its rediscovery in the 1800s). The book Doping in Sports (page 233, Detlef Thieme & Peter Hemmersbach, Springer, 2010) mentions its use by 19th century cyclists, and its possible implication in the death of the Welsh champion cyclist Arthur Linton in 1896. It was also one of the drugs used in the now-defunct Victorian sport of pedestrianism.

Pedestrianism took various forms, sometimes cross-country, but its classic version was a gruelling track-based race called a Six-Day Go As You Please or a "Wobble". Competitors walked around a track for six days, the winner being the one who covered the greatest mileage. Entrants came from a broad social spectrum, from elite gentleman athletes to the lowest working classes (for instance, men who had developed superhuman stamina working as navvies), and the races attracted big money, both in prizes and the associated betting.

The record distance was set in 1888 by George Littlewood, who covered 623.75 miles (an average pace of 4.33 miles per hour) despite bad burns from a saboteur setting fire to his alcohol footbath. Littlewood's achievement was finally bettered by a modern ultramarathon runner, but even before that, the physiologist BB Lloyd wasn't far wrong in his 1966 description of this as "probably the maximum sustained output of which the human frame is capable". See Athletics: Littlewood's giant strides ("The Anniversary: 110 years ago an Englishman defied sabotage and fatigue to run 623 miles" - Simon Turnbull, The Independent, 29th November 1998).

Running Through the Ages by Edward S Sears has a detailed history, "The Struggle for the Astley Belt" (previewed at Google Books) surrounding the most famous promoter of these races, the sports enthusiast and politican Sir John Astley. This contemporary account by J. Ewing Ritchie, quoted at Lee Jackson's The Victorian Dictionary - Chapter VIII, Pedestrianism - gives something of the flavour of the races, as does this 1888 New York Times piece about an American race at Madison Square Gardens, Started by the Marquis.; the Go-As-You-Please pedestrians all hard at work.

As to the point: strychnine and pedestrianism form the backdrop to an excellent crime novel by Peter Lovesey, Wobble to Death. His debut novel, the first in his Sergeant Cribb series, it won the Panther/Macmillan First Crime Novel Competition and is a fine example of building a story around bizarre-but-authentic historical detail. I won't spoil the plot for you, except to say that it involves the mystery surrounding the sudden death of a competitor in mid-race, under circumstances where possession of strychnine doesn't necessarily prove murderous intent.
- Ray

Update,  February 7, 2013
Ptak Science Books has a piece - Strychnine for Weak Women, 1920 - mentioning a patent medicine called Nuxated Iron, which undoubtedly relied on the stimulant effect of strychnine.
at 17:45 2 comments

I just added a minor addendum to the Hardy perennials post: a photo of the grave of Tryphena Gale (born Tryphena Sparks), Thomas Hardy's cousin and possible lover in his younger days. A friend kindly helped us through a gap in the hedge to show us the location.
-Ray
at 20:57 0 comments

Minding the shop this morning, I had a very interesting phone conversation when I answered a call to relay a message intended for Lily. It turned into a discussion of Henry Mayhew, Gibson & Sterling's The Difference Engine, and the whole area of research for novels - particularly the problem of when research conflicts with popular belief. Sarah, the caller, mentioned the problem of a writer using the word "beverage" in a mediaeval setting. It's totally authentic for the period - from the OED:

But to most readers the word has a modern flavour that jars.

The message for Lily regarded waterbeds. Surely a quintessentially 1960s invention? Yet this concerned a reference in Elizabeth Gaskell's 1855 novel North and South: Mrs Hale is ill, and from Chapter 21 - The Dark Night - onward there are a number of references to a waterbed.

But, I think, if we could get a water-bed it might be a good thing. Not but what she will be better to-morrow; pretty much like herself as she was before this attack. Still, I should like her to have a water-bed. Mrs. Thornton has one, I know. I'll try and call there this afternoon. Stay,' said he, his eye catching on Margaret's face, blanched with watching in a sick room, 'I'm not sure whether I can go; I've a long round to take. It would do you no harm to have a brisk walk to Marlborough Street, and ask Mrs. Thornton if she can spare it.'

In fact it's mentioned so many times over the next few chapters that you'd almost suspect product placement. I promised I'd try to find details, and here they are: Google Books finds a couple of contemporary texts online. An Encyclopaedia of Domestic Economy (1855), pp. 309-311, mentions Dr. Arnott's Hydrostatic Bed, which is described in more detail in a London Medical and Surgical Journal article, Volume II, 1833 (pp. 165-168). Essentially this waterbed was a trough of water covered with an "India rubber cloth" - rubber-impregnated canvas - upon which other bedding was laid. Its use wasn't recreational or novelty-value, but medical.

As the latter article reports, Dr. Arnott made no proprietary claims to the construction, and it appears to have had genuine medical benefits by evenly distributing pressure, preventing pressure sores that were common with invalids lying on hard mattresses (which were typically stuffed with wool or horsehair). The article comments that spiral spring mattresses, predating this by some 70 years, had similar potential. But the concept had gone into patent, confining it to the luxury market and stifling modifications for medical purposes.
- Ray
at 06:46 0 comments 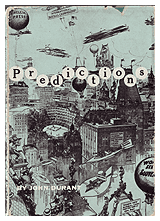 I've just been reading Predictions (A.S. Barnes, 1956), John Durant's book of American newspaper and magazine art, largely from the late 1800s, portraying the future as it was envisaged at the time. Largely, this work was not intended as literal prediction, but as satire on current trends; many of the pieces are unpleasantly sexist and racist visions of the horrors of gender role reversal, or of America being taken over by negroes, the Irish, Germans, Jews, and so on. There are occasional stabs of brilliant prescience of things that hadn't yet happened, such as worldwide mass communication, anti-aircraft weaponry, and routine nudity on the theatrical stage. Largely, the artists got it wildly wrong, a particular error being the idea that personal air transport would become universal. If you like this kind of failed prediction, the Paleo-Future blog runs a continuing compilation.

Much the same applies in literature. Some works are deliberate attempts to predict: I've previously mentioned here the accuracies and inaccuracies in HG Wells' The Shape of Things to Come (see ... and roads not taken). Others are clear satire: it's the reviewers who insist on phraseologies like "a chilling prediction". A particular case in point is George Orwell's Nineteen Eighty-Four. It's very worth reading Anthony Burgess' 1985 - reviewed here by Martin Amis - which apart from its own dystopian tribute to Nineteen Eighty-Four includes a series of essays on the roots and themes of Orwell's book, such as a reflection on the language of IngSoc, and the connections with Yevgeny Zamyatin's novel We, which also may have influenced Aldous Huxley's Brave New World.
Burgess argues highly convincingly that Nineteen Eighty-Four is a very dark satire on the period it was written, a period in which wartime alliance with Russia had turned instantly into the Cold War (akin to the shifting but officially nonexistent alliance shifts in Nineteen Eighty-Four). Anyone from that era, Burgess writes, will remember the rationing, the shortage of razor blades, and the Bennett Correspondence College with its post-war "Let me be your big brother" advertisements. * Room 101 was a hated conference room at the BBC's Broadcasting House.

Burgess's 1985, incidentally, is itself no exception to the rule of predictions being wrong; it is partly right, though many years late, in its portrayal of the importance of Islam, but completely wrong in its expectation of trade union dominance, which in the real world was dismantled in the Thatcher era.

Addendum inserted 31/7/208: I highly recommend Dr Ralph Harrington's paper ‘The old enemy’: Anthony Burgess and Islam, which is a detailed analysis of Burgess' views on Islam, which in 1978 were remarkably prescient.

Of peripheral interest, I notice that the Sylvester Stallone film Demolition Man is on UK television this week. If you're of a mind to do so, it can be read as an adaptation of Brave New World (among other explicit allusions, one main character is called Lenina Huxley) though the relationship is even looser than that between Terry Gilliam's Brazil and Nineteen Eighty-Four that inspired it. 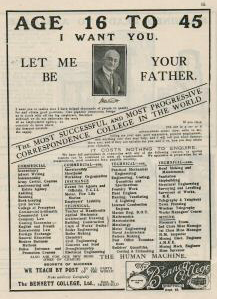 Addendum #2: 9/12/2008. * I'm getting a mild attack of scepticism. It's repeatedly mentioned that "Big Brother" comes from post-WW2 ads for the Bennett Correspondence College, when the kindly elder "Let me be your father" Mr Bennett died and his brutal-looking son took over with the slogan "let me be your big brother". This story, which first appears in 1978 in Burgess' 1985, is proving difficult to verifty. The pre-war ad of the older Bennett was easy enough to find (see left); but pictures of the revised ad with the younger "Big Brother" Bennett are elusive. There's no particular reason to doubt Burgess, but propagation from one secondary source with no primary source is a little iffy research-wise. Can anyone help?

This one might especially interest Lily (whose colour-coordinated window displays are a popular and regularly-changing feature of the shop). At COLORlovers, there's a very nice blog post, Organizing bookshelves by color, on just this subject. It cites the Rainbow of Books Flickr group, which has further pretty examples. Perhaps the most ambitious example, though, was in 2004 when the artist Chris Cobb persuaded Adobe Bookshop, San Francisco, to let him reclassify its used book section (some 20,000 books) on this basis as a public installation called "There Is Nothing Wrong In This Whole Wide World". Here are some pictures.