The thankful old lady of Topsham

While skimming topographical references, I ran into Elizabeth Jane Brabazon's Exmouth & its Environs, an 1866 travel account which takes a side-excursion to Topsham that wasn't entirely to the author's taste. Directed on a pleasant field walk to "the Countess Weir’s grand house", she finds she has been sent to a pub; and she has a run-in with smoky lodgings and the Panglossian "thankful old lady of Topsham".

Pardon the rather hackneyed scenery shots ... but the last couple of days have seen the bright, crisp, and calm high-pressure weather that brings out the Exe at Topsham at its most photogenic.

Getting well in Bournemouth

Horace Dobell's 1886 The Medical Aspects of Bournemouth and its Surroundings must win some kind of prize for a location account whose illustrations make the reader least likely to want to go there. They contrast strongly with those in Sydney Heath's 1915 Blackie guide Bournemouth, Poole & Christchurch, which is illustrated by EM Haslehust's delicate but luscious watercolours. 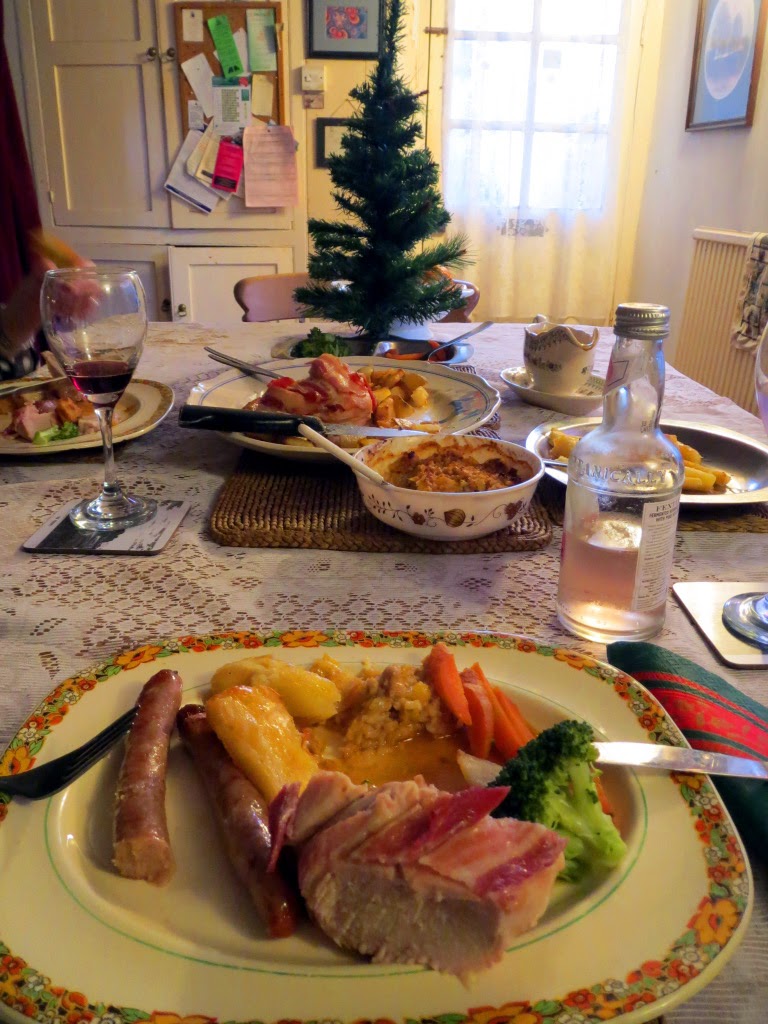 Best wishes of the season to all JSBlog readers.

Email ThisBlogThis!Share to TwitterShare to FacebookShare to Pinterest
Labels: photo

St. Lawrence Well is another poem from the illustrated anthology The Vecta Garland, and Isle of Wight souvenir, by Newport tinsmith, ironmonger and poet Albert Midlane. This concerns a stranger who came to the well for a drink, and left scurrilous lines - mild ones, anyway - on finding it locked up.

The Statue in the Block

A nice piece of Christmas Eve Gothic from Maxwell Gray's 1893 The Last Sentence. In this episode from the novel, the protagonist - the respected barrister Cecil Marlowe - isn't much enjoying a jolly village Christmas with upper-crust friends who include his fiancée Cynthia Brande. He's a worried man, as a secret from the past has caught up with him: his existing marriage to the Breton peasant Renée Kérouac. While he knows she has sought him out, having recognised her at an ice-skating party, he is unaware that she has been stalking the happy gathering from the garden, during the overnight blizzard.

Further to the previous post - Professor Boys' Rainbow Cup and other marvels - this evening I made a trial attempt at photographing soap films. This was just using the usual Canon Ixus pocket camera, handheld, looking at a detergent film in the handle of a corkscrew. The setup is dark background, and strong reflected light at an angle.

More on bubbles... A recent post at Ptak Science Books - Bubble Aeronautics - put me in mind of a book from childhood: RM Abraham's Easy-to-do entertainments and diversions: With cards, string, coins, paper, and matches (Dover Books, c. 1962). It had a good section on experiments with bubbles, with a recipe for soap solution that "for the best effect ... should be made according to the following formula recommended by Professor Boys".

Diamonds in the sky


I don't normally enthuse about adverts, but this current Sony 4K "Ice Bubbles" one, showing soap bubbles freezing in cold air, is very pretty, though I'm not sure quite what to make of it.

Mount Misery is another interesting topographical poem from the 1860 The Vecta Garland, and Isle of Wight souvenir. A number of locations have this name: notably the highest points of St Kitts (renamed Mount Liamuiga on its independence in 1983) and of West Point Island in the Falklands). Midlane's Mount Misery, however, is—or rather was—only a mile and a half north-east of Newport.

Another Blank, Missing and Empty Thing - another rock disappeared from history - the Dropping Rock, a spring that was formerly a well-known fixture of St George's Down, near Blackwater, a couple of miles south of Newport, Isle of Wight. It's the subject of one of the poems in Albert Midlane's 1860 The Vecta Garland, and Isle of Wight souvenir.

Looking for topographical images of the Isle of Wight Undercliff (in the search, so far unsuccessful, of finding an identifiable image of Gore Cliff at the location of Chad's Rock prior to the 1853 blasting) led to me an illustrated poetry anthology The Vecta Garland, and Isle of Wight souvenir, by Albert Midlane.

The timeline of Chad's Rock

Another post inspired by the interesting category History of Blank, Missing and Empty Things at John Ptak's blog Ptak Science Books: the fate of "Chad's Rock" (aka Chad Rock), a picturesque monolith on the Isle of Wight Undercliff that regularly appears in paintings and photos of the late 19th and early 20th centuries, but which no longer exists.

Another nice example of what's findable on the Internet: the fairly rare 1908 A&C Black guide, Isle of Wight. The text is by Ascott Robert Hope Moncrieff (1846-1927), a regular contributor to the Black's Guide stable, but also a prolific writer of gung-ho adventure stories for boys. The book is probably better known, however, for its exquisite series of plates from water-colours by the landscape painter Alfred Heaton Cooper (1863-1929).