More on bubbles... A recent post at Ptak Science Books - Bubble Aeronautics - put me in mind of a book from childhood: RM Abraham's Easy-to-do entertainments and diversions: With cards, string, coins, paper, and matches (Dover Books, c. 1962). It had a good section on experiments with bubbles, with a recipe for soap solution that "for the best effect ... should be made according to the following formula recommended by Professor Boys".

It shows how young I was, because it took me a couple of years to realise that this wasn't "professor boys" - some mysterious group of geeky science-obsessed boys like my younger self - but a scientist's name. Boys - Sir Charles Vernon Boys, FRS (1855-1944) - was one of the great experimentalists of classical physics, one who pushed measurements to the edges of possibility in a pre-nuclear pre-electronics era. He was also a great science populariser, but not beyond the occasional eccentricity that could turn a bit dark. Biographies tend to hint that Boys, while much loved in scientific circles, was a bit of a pain in his personal life. For example, the RV Jones biography from The Complete Dictionary of Scientific Biography (2008) mentions that ...


Boys delighted in practical jokes, in which the victim might equally be a cat invading his garden or a solemn academic colleague.

... and Paul J. Nahin's When Least Is Best: How Mathematicians Discovered Many Clever Ways to Make Things as Small (or as Large) as Possible goes further (pages 273-274) in even ascribing Boys' marriage breakup to this behaviour. 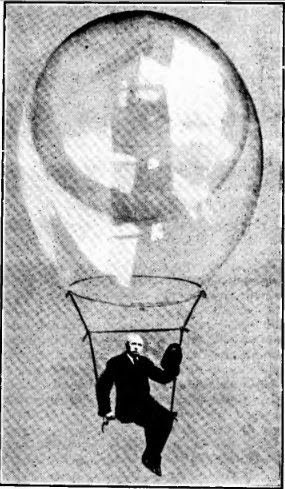 Anyhow ... Bubble Aeronautics draws attention to a letter, A Flight of Pure Imagination, that Boys, then 87,  sent into Nature for October 17, 1942 (see page 464), with a joke photo and a verse:


"Why does Sir C. V.Boys elect
To do the things we least expect?"
Sir Richard gave the explanation*.
But how? Well, here's an illustration—
"A photograph which cannot lie"
Shows clearly that he does it by
A flight of pure imagination.

He explains in the accompanying letter that


I took the photograph some time after the year 1912 when my paper on rotating films appeared (Proc. Roy. Soc., 87) and the Rainbow Cup became a popular scientific toy".

This is all a bit cryptic without background, so I chased up the reference. The 1942 letter by Boys is a very belated response to a verse tribute to his achievements on the occasion of his 80th birthday in 1935 (To Sir Charles Vernon Boys on his Eightieth Birthday, Sir Richard Paget, Nature 135, 984-984, 15 June 1935). I couldn't find it online, but managed to put it together from piecemeal quotations.


Why does Sir C. V. Boys elect
To do the things we least expect,
And always choose a task that seems
More suited to the land of dreams:
A problem other men would shirk,
Yet solve the task, and make it work—
By means that no one else employs—
The answer is: Boys will be Boys!

What made him buy an Otto bike,

Two wheels abreast, a thing to strike
Terror in any rider's soul,
Yet somehow manage to control
Its actions and avoid a spill,
And using his uncanny skill
Delight in a precarious poise?
Again we say: Boys will be Boys.

The second stanza refers to a bicycle variant, the Otto Dicycle. It was permanently in unstable equilibrium - the rider had a high centre of gravity on the axle between the two large wheels. A pilot wheel stopped you falling backwards, and accelerating stopped you falling forwards. It was fiendishly difficult to ride, but it nevertheless attracted a following of 'Ottoists', of which Boys was one. He describes it in his paper Bicycles and Tricycles (Scientific American Supplement. Vol. XVIII, No. 447. New York, July 26, 1884) originally given as a lecture before the Society of Arts, London.


Why snatch a bullet in its flight
Lit by a single spark so bright
That on a photographic plate
The fleeting shadow seemed to wait —
With wake and bow-wave primly set —
All posing for their silhouette —
And leave a picture of the noise ?
Because, of course, Boys will be Boys!

This piece from The Strand magazine - Some Curiosities of Modern Photography. Part II, William G. FitzGerald, The Strand 191, February, 1895 - gives some of the technical details. The lead to the piece is fairly weird, if not disgusting, to the modern reader; as an example of high-speed photography, it shows a picture of a decapitated mule ...


... an old and worthless one which was about to be destroyed; therefore it was decided to sacrifice the animal upon the altar of science ...

which was photographed in the instant after its head was blown off with dynamite, but before its body had time to fall. The past is certainly another country... At least it was quick. The Strand piece is quoted as part of a larger American Quarterly essay by Thomas Thurston, very worth reading, on the development of photography as legal evidence: Hearsay of the Sun: Photography, Identity, and the Law of Evidence in Nineteenth-Century American Courts.


Why did his bold, untrammelled thoughts
Conceive the scheme of fusing quartz,
Using an arrow, as it fled,
To draw a microscopic thread,
And from the fusion to “unreel“
A gossamer more true than steel,
Which every Physicist enjoys?
The fact is this: Boys will be Boys.

There's a brief account of Boys' presentation of his paper The Production, Preparation and Properties of the Finest Fibres, in Nature (April 14, 1887, page 575, Internet Archive nature3518861887lock). The fibres radically improved the precision of torsion-balance experiments, such as those to measure the gravitational constant. Boy's crossbow setup was still being used in the 1940s: see Popular Science, August 1944, page 127.


What made our friend so seeming rash
As to pursue a lightning flash
By lenses rapidly revolved,
And even get the problem solved
Both of its speed and structure by
A photograph “which cannot lie“?
That gave a thrill that never cloys,
And showed us still, Boys will be Boys.

Lightning (Martin A. Uman, Courier Corporation, 24 May 2012, pages 15ff) has an account of the Boys Camera. It took decades to get the thing to work, but the technology was eventually able to elucidate the direction of lightning flashes (there being long-standing debate over whether lightning flashes upwards or downwards).


To weigh the Earth, to check the Therm,
Explain the logarithmic term,
To build with bubbles and maintain
The opal colours in their train :
These are his pleasures, these his ploys,
Where skill with mind and truth alloys,
For which in Science as in toys
We thank our stars Boys will be Boys.

"To weigh the Earth" refers to Boys' 1894 repetition of the Cavendish experiment; "check the Therm" refers to his work as Metropolitan Gas Referee, improving the instruments used to measure the calorific value of gas; and "Explain the logarithmic term" refers to his letter Rational logarithms (Nature 127, 403-403 (14 March 1931), which proposed how best to teach logarithms to beginners.

"To build with bubbles" etc refers to Boys' best-known science popularisation, the classic multi-edition Soap-bubbles and the forces which mould them (Being a course of three lectures delivered in the theatre of the London institution on the afternoons of Dec. 30, 1889, Jan. 1 and 3, 1890, before a juvenile audience (see 1896 edition, Internet Archive soapbubblesthefo00boysrich). It's a massively readable work, with experiments still worth doing. His more academic Experiments with Rotating Liquid Films [Boys, C. Proceedings of the Royal Society of London. Series A, Containing Papers of a Mathematical and Physical Character (1905-1934). 1912-10-02. 87 (596):340–350, Internet Archive philtrans08216523] seems a little dry in tone, but it had a popular spinoff as the "Rainbow Cup" mentioned in the 1942 Nature. 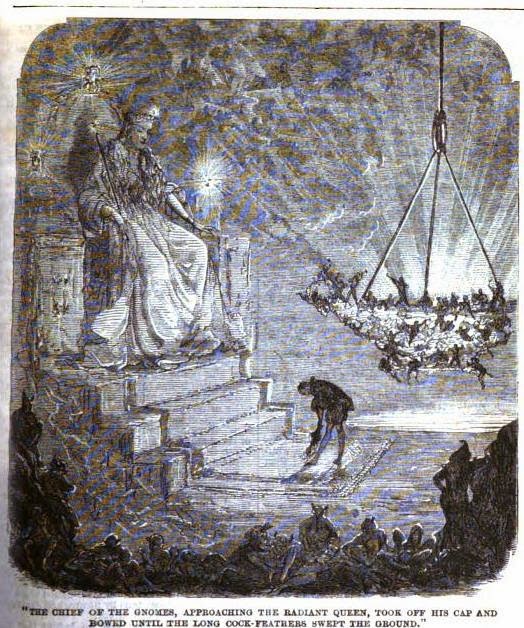 It took me a moment to find a description of the Rainbow Cup, and Google leads in some off directions - including a menstruation appliance; a folk name (Regenbogenschüsselchen) for Celtic gold coins of Middle Europe; and a children's story, The Ruby Rainbow-Cup, in Frank Leslie's Pleasant Hours, 1867.

However, Boys' Rainbow Cup eventually tracked down; it was a little spinning cup whose top was covered with a soap film. When it was spinning, centripetal force caused a consistent variation in film thickness from the centre outwards. Since the interference colours of a soap film are a function of its thickness, this produced pretty concentric rings of colour. I can't quite imagine it as being of abiding interest, but it was evidently viewed as a very worthy and educational toy. The Child in 1914 reviewed it thus:


It provides a means whereby fascinating experiments may be made in patterns of great brilliance and much variety of form and colour. It is quite simple to use and is free from all elements of danger.
- The Child, John Bale, Sons & Danielsson, Limited, 1914

There's a detailed technical review in Knowledge; a monthly record of science in 1913. This review does explain the appeal better than the others, explaining a dimension not mentioned elsewhere: that the patterns are not static, nor just simple rings.


... in the ﬁlm of Mr. Boys' revolving cup, the regularly diminishing thickness gives [the colours] an orderly succession. As the ﬁlm becomes thinner the colours appear in circular rainbow bands in the following order,beginning with a ﬁlm ﬁfty millimetres of an inch thick:—pale green, pink, pale green, pink. bluish green, salmon colour, bright green. magenta, yellowish and then brilliant apple green, blue, purple, red, yellow, poor white, steel blue, purple, brown, straw colour, white, black. Each of these colours is related to its particular thickness of ﬁlm which can be computed. The apple green is twenty millimetres of an inch thick. When the black is reached, far below the wavelength of any light, the thickness of the ﬁlm is only 1/2000000th of an inch thick. 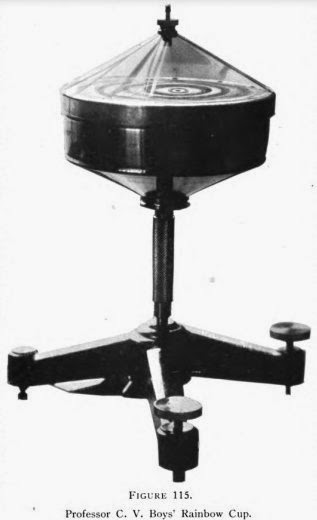 The black appears in a small spot at the centre of the cup (and of the spinning rainbow bands) and slowly grows. It can be made to grow faster by stopping the rotation and tilting the drum. Then the black ﬁlm being thinnest and, therefore, lightest, passes upwards, to the higher edge of the drum. It continually eats its way into the other colours of the ﬁlm and Professor Boys in his paper in the Royal Society's Proceedings surmises that the areas of black thus formed, which assume the form of lines, streams, and meandering rivers, have steep banks. In certain circumstances a deeper black is set up within their areas, and this black ﬁlm may be as little as the 1/4000000th of an inch in thickness. At that one is justiﬁed in supposing that hardly more than ﬁve hundred molecules are set end to end through the black ﬁlm's thickness.

These divagations of the black aided by stopping and starting and reversing the rotation of the drum several times, are productive of a number of very beautiful patterns of colour: Persian shawl patterns, spirals, and an innumerable variety of groupings of colour. Perhaps nothing is more striking, however, than the appearance of the surface of the ﬁlm when, a considerable quantity of black having been allowed to grow, the drum is again rotated. The surface then appears like the eye of some strange beast, with a huge black pupil and a rainbow coloured iris.
- Knowledge; a monthly record of science. v.36 1913 (pages 115-116, digitised copy at Hathi Trust).

The Science Museum has a couple of photos of one: 'Rainbow Cup' scientific toy. They don't show it in action, but the instruction book illustration gives some idea of the colour effects obtainable. Note that "rainbow" is a slight misnomer. A rainbow is a simple sweep across the visible spectrum; but as the brief technical description in John Strong's 1958 John Strong's Concepts of Classical Optics (pages 224-225 in the 2012 Dover reprint) explains, interference colours have a far more complex function of colours with film thickness.

See Dynamic interference colors in thin soap films for examples of what might be expected. And here's one of my own experiments (see the following post, Soap film photographs #1). 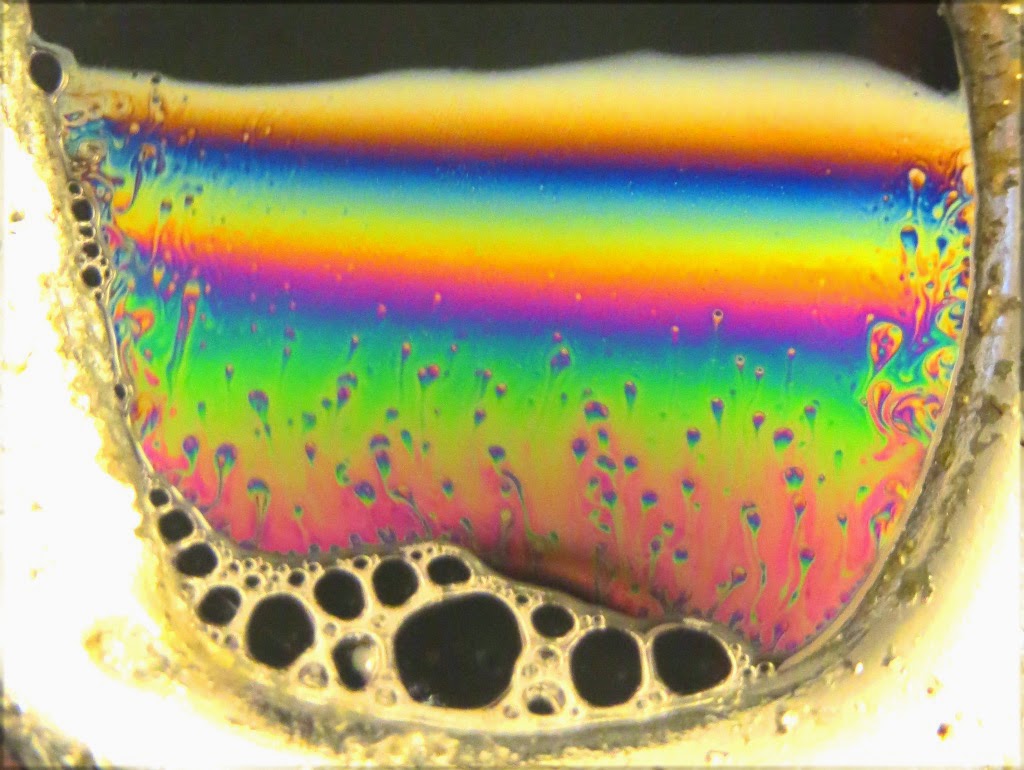