Another Blank, Missing and Empty Thing - another rock disappeared from history - the Dropping Rock, a spring that was formerly a well-known fixture of St George's Down, near Blackwater, a couple of miles south of Newport, Isle of Wight. It's the subject of one of the poems in Albert Midlane's 1860 The Vecta Garland, and Isle of Wight souvenir.

Brief update first: due to my health situation, I'd resigned to this story staying a loose end. But I'm delighted to find that Dropping Rock and its Well are still extant, and Rob Lawn kindly sent me a YouTube link. However, do read on: Midlane's poem leads on a nice literary/geological journey.


THE DROPPING ROCK,
On St. George's Down.

"Nature, throwing aside
Her veil opaque, discloses with a smile
The Author of her beauties, who, retired
Behind His own creation, works unseen."—Cowper.

Dropping, and dropping, through fern and through heather,
E'en in the summer noon's sultriest weather;
Still the hard rock is its water bestowing,
Where the rank weeds germ, and the rushes are growing.

Gently and evenly falls the clear shower,
The work of a mighty, invisible power;
Streaming not, running not—dropping alone,
Through the centuries past, and the long ages flown.

It is as though Nature were shedding a tear,
Of sorrow o'er waste and o'er barrenness near ;
For Ceres has spread not her stores on its breast
With wild shrubs alone are its environs drest.

Like Horeb's famed Rock, which to Israel of old,
Its volume of water through desert lands rolled;
The rock of St. George's its moisture supplies,
Where a rude sterile landscape alone meets the eyes.

In the rambles of childhood I hither would stray,
To list in its shade to the thrushes' sweet lay;
And to view the loved songsters with gladsome wing haste,
In fancied seclusion, its waters to taste.

Still give of thy freshness, sweet Rock of the Down
Which ere long, peradventure, rich plenty may crown;
When thy drops shall be prized as the dew of the morn,
And thy rushes give place to the ripe golden corn.

This poem is actually quite enlightening in a geomorphological way; a spring high on a down on uncultivated heathland is not the usual 'spring line' spring at the base of the Isle of Wight's chalk downs. Midlane gives further detail in a prose description in the Baptist Children's Magazine:


But now I must come to the Rocks of my native Isle, and the first I shall describe to you is, the "Dropping Rock.'' It is situated on the declivity of St. George's Down, and is hardly discoverable from the large quantity of furze and rushes, which the continued moisture nourishes, and which grow so luxuriantly here.

Strange it is that, in the midst of so much barrenness, there should be such a source of refreshment, as it were, an "oasis in the desert." It is not an impenetrable mass of stone, but of a gravelly nature, and its peculiarity consists in this, that, unlike other springs, it is continually dropping. It is a beautiful object after a hard frost; the icicles forming a sight of much interest.
- Remarkable Rocks, Albert Midlane, The Baptist Children's Magazine, ed. Joseph Foulkes Winks, 1853

It's easy to find a precise location - grid reference SZ 51350 86516 - using old map resources such as the National Library of Scotland comparison viewer above. Up to 1910, Ordnance Survey show Dropping Rock Well; Dropping Rock Cottages appear alone on the 1938 map; and neither are mentioned on the 1962.

The Isle of Wight Family History Society Newport page has a good image of Dropping Rock Cottages, and there's further confirmation of the details in late 19th century geological guides, which refer to the aquifer responsible for the phenomenon: the 'plateau gravels' that top St George's Down.


The cementing of the gravel into blocks by a ferruginous cement has already been noticed. These blocks occur in abundance all along the southern boundary of the outlier, and are found also in several distant spots, having probably been carried off for rockeries, or building. The rain which is absorbed by the gravel naturally travels down the northerly slope, and is given off in the springs previously alluded to, but there is one spring on the south side, close to the house which is so conspicuous on the brow of the hill, known as the Dropping Well. The water oozes from a layer of cemented gravel, and is never known to fail.
- page 213, The Geology of the Isle of Wight (HMSO, 1889, Internet Archive geologyofisleofw00bris).

A feature of the beds here is the stratum of conglomerate which forms the basement of the gravel. This is formed by the cementing powers of the iron oxide, and the conglomerate is about two feet thick. It may be seen at the “Dropping Well,” and also in the cartway at the eastern end of the down. This “Dropping Well” was visited by the Club, and forms a very admirable illustration of the water-bearing property of the gravel; for the gentle trickle of water flowing out over the basement bed of conglomerate has never been known to fail, even in seasons of protracted drought.
- page 152, Papers and Proceedings, Volume 3, Hampshire Field Club and Archaeological Society (Southampton, England), 1898

The geological context made Albert Midlane's hope that "thy rushes give place to the ripe golden corn" very unlikely to happen. Plateau gravels give poor acidic soils unsuitable for agriculture. The gravels, however, have been extensively mined throughout the 20th century, and the location of Dropping Rock now lies in the middle of an area of current and former gravel pits and sludge ponds. SZ 51350 86516 is arrowed below: 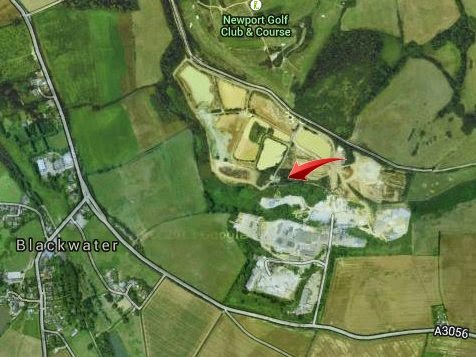 You can get a closer map view with the NLS viewer or Google Maps; the location is in the copse to the east of the cluster of buildings with the pylon. The more or less north-east adjacent track is public footpath 39, which leads from Blackwater to join the Bembridge Trail (footpath 28). See the Isle of Wight Rights of Way map 39 (Blackwater Merston Manor St Georges Down).

Update, 2nd June 2015
How cool is this? Dropping Rock and its Well do indeed still exist, and Rob Lawn kindly sent me a link to his YouTube video, Dropping Rock Well on the Isle of Wight. Thanks! That has made my day. Due to my current health problems, this was a story with a loose end that I thought I'd never see to source.

There's also Remains of Dropping Rock Pigsty on the Isle of Wight, another structure recognisable from old photos of the no-longer-extant cottages on the site. I highly recommend the source collection: RevengeLawn YouTube channel., which has many interesting examples of Isle of Wight subterranea and lost/derelict structures.