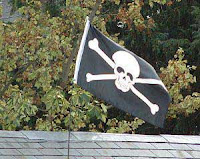 ...that Fraser instantly demolishes with the reality about sanitation and poverty. There be a fine bibliography o' pirate books at its stern end, an' here be a review by the New York Times - Buckling down the swash. Read on, ye landlubbers, damn ye for a lizard else. - Ray
at 19:30