Laurence Oliphant ... Victorian with a difference 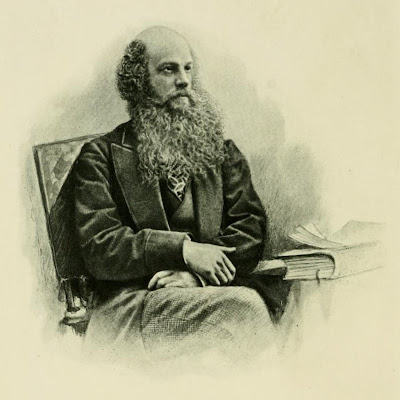 Normally I'd take a cover blurb of ...

... to be an excess of hype, but this introduction to Anne Taylor's 1982 biography of Laurence Oliphant isn't far off the mark. Oliphant (who lived from 1829-1888) divided his life between the highly mainstream (as a novelist and member of parliament), world travel (partly as diplomat, partly ... ostensibly ... dilettante), and religious mysticism (he spent time at the commune of the American prophet Thomas Lake Harris, and was an early strong proponent of Zionism).

Biographies of Oliphant aren't difficult to find. For instance, Electric Scotland quotes the 1895 Dictionary of National Biography. But modern ones such as Taylor's are rather more enlightening in not airbrushing out that his early work was in the capacity of secret agent (his travels and documentation of the local scene, with vague government endorsement, systematically took him to all the world trouble spots of the time). There's also more context about his involvement with Harris, a Swedenborgian: an interest in mysticism (whether Swedenborgianism, Spiritualism, Theosophy, etc) and proto-Socialism in various forms was very common among Victorian liberal reformers. Harris, however, was a charlatan, and Oliphant and his wife took this involvement to a self-destructive extreme.

I first ran into Oliphant in a different context: as a main character in William Gibson and Bruce Sterling's The Difference Engine, an alternate-history SF novel set in a 19th century where Charles Babbage's ideas on computing were fully realised in his lifetime, making mechanical computers as ubiquitous in the mid-1900s as electronic ones are now. The Difference Engine is meticulously researched literary SF, and incorporates many contemporary real and literary figures. Oliphant is there, as are Sybil Gerard and Charles Egremont (both characters from Disraeli's real-world novel Sybil); Disraeli in the book is merely a hack writer, and Keats a 'kinotropist', an operator of mechanical cinema. Events are set against the backdrop of the Great Stink of 1858 London.

There's a nice online concordance, The Difference Dictionary, which
even if you haven't read the book is a good taster of Victorian technical-cultural local colour. The ever-useful Internet Archive finds an interesting essay by Elisabeth Kraus , Gibson and Sterling's Alternative History: The Difference Engine as Radical Rewriting of Disraeli's Sybil, that explores the literary comparisons in depth, and there has been a deal more academic comment on the book: for instance, Herbert Sussman's Cyberpunk Meets Charles Babbage: The Difference Engine as Alternative Victorian History in Victorian Studies, Vol. 38, No. 1, Autumn, 1999 (unfortunately not online).

The Difference Engine is, incidentally, a good example of the 'steampunk' genre: the Victorian equivalent of 'cyberpunk' (the latter generally concerned with dystopian futures where social breakdown goes hand-in-hand with rapid technological advance). Victorian London was remarkably similar. This was an era of the expansion of a global empire, linked by telegraphy - the 'Victorian Internet' - yet with a level of poverty, as documented by Henry Mayhew, that made London similar to a modern Third World megalopolis.

I had the good fortune to attend the Birmingham launch in 1990, where Gibson and Sterling made the comparison with Victorian times explicit. Sterling said, "The Victorian age was a great, but frightening, period, with the roots of the same ambivalence to technology that we see today". Gibson added: "And it's the only period in history comparable to what we're going through now. The only time that the rate of change was so traumatic". Sterling continued: "The intention of the book is social anaylsis, more or less ... an attempt to look at the roots of the industrial and cybernetic revolution."

Addendum: there's an update at Bessemer Saloon and other experimental ships.