"The author is dead" is the dictum of post-modern literary criticism: that is, fiction is entirely what you read into it, and it is unwise to try to interpret it as a reflection of real events or the supposed psychology and circumstances of the writer. Nevertheless, many novels are demonstrably based on real events and autobiographical elements (the latter is especially true of literary first novels).
In the case of Let's Go Play at the Adams', the author is literally dead, and unable to confirm or deny any such interpretations. But I find some possible connections between reality and Johnson's fiction striking enough to be worth outlining. I may be mistaken - this is just a personal view. But the fact that Let's Go Play at the Adams' is so open to different levels of interpretation confirms my belief that Johnson was a writer of considerable talent to intertwine these themes and create a novel with such 'deeps'.

The Likens/Baniszewski caseThis, as outlined in the previous posting, was a notorious 1965 murder case in Indianapolis. Gertrude Baniszewski, 38, led a group of teenagers in the imprisonment, escalating abuse, and murder of Sylvia Likens, a 16-year-old left in her charge while her parents were away on tour. It's interesting to compare the characters involved.

I've been rightly warned of the risk of exaggerating the similarities. The many radical differences between fictional and real cases include: the location, the social class of the defendants, and the characters involved. Baniszewsi's other children and Likens' sister were present in the house. Natty Bumppo of Borf Books (John Dean as was) kindly sent me further information that more children were involved than those convicted - "at least one of the Baniszewski's children, and several neighbours" - and also that Ricky Hobbs was not a friend of the Baniszewski children, but of Gertrude Baniszewski herself.
However, focusing on those convicted, there are interesting similarities. With the obvious exception of the adult involved in the L/B case, the ages are similar; both sets of perpetrators contain two females and three males; the older female is the ringleader; and both groups contain siblings.
In LGPATA, Freedom Five torture Barbara with a red-hot iron before finally mõrdering her; Baniszewski's final act before murdering Sylvia Likens was to brand her with a white-hot needle.
Freedom Five in LGPATA frame an itinerant for Barbara's murder; in the L/B case, the defendants at first attempted to blame Likens' abuse and murder on a gang of boys.
It may be reading too much into appearances, but photographs of the L/B case defendants show that Gertrude Baniszewski could be described as "bony" or "skinny" (as Johnson describes Dianne, the Freedom Five ringleader); and that Richard Hobbs, who helped Baniszewski brand Likens, wore glasses (like Paul McVeigh, who in LGPATA is prime mover in similarly torturing Barbara).
There's also an interesting coincidence of phraseology. Johnson's fictional newspaper headline in LGPATA is "Boys avenge baby-sitter's torture slaying in MD."; whereas the title of John Dean's 1966 true crime book about the case is The Indiana Torture Slaying.
The last point doesn't necessarily mean anything much. A quick web search will demonstrate that "torture slaying" is widespread as USA newspaper jargon for this type of murder (and Johnson's early career was in newspaper journalism). Nevertheless, in conjunction with the other similarities, it could imply that Johnson had read of the case.
Probably the best Internet account of the L/B case is at the Crime Library. Jack Ketchum's horror novel, The Girl Next Door was based on this case, but he has also said that LGPATA was part of what informed his novel. (See the archive of Philip Nutman's Horror Writers' Halloween Recommendations and Ketchum's comment: "Mendal W. Johnson's LET'S GO PLAY AT THE ADAMS' for anybody who wants to know part of what informed THE GIRL NEXT DOOR and have a damned good read to boot".

Internals
There are a number of connections between Johnson's biographical details and his themes and characters. It scarcely needs noting that the novel presents teenagers and children as unsympathetic and evil (according to relatives, MJ disliked children) but there are further, more specific, connections between MJ and his main characters.
Johnson had an immediate family member who was "an accomplished pianist, possibly concert", and himself had diverse musical interests. The novel begins with Barbara giving Cindy a piano lesson, the first of several references to Schumann's piano piece, The Happy Farmer. Michael Edwards (also a talented musician) suggests that the style of musical allusions in LGPTA (Barbara's hopes of freedom described as musical metaphor ... "the great A-major majesty of it") implies expert knowledge of the mood effects of different keys experienced by musicians with perfect pitch.
John Randall is familiar with boats and "casts a sailorly eye" at the weather (MJ was known as "Johnny" and a keen sailor). Dianne McVeigh is tall and skinny, and extremely well-read (MJ was "tall and lanky", with "diverse reading interests"). Paul McVeigh is a severely neurotic boy with steel-rimmed glasses (MJ had "emotional problems" and wore horn-rimmed glasses). And the novel asks "Did she drink too much?" of Cindy Adams in adulthood (MJ suffered from alcoholism).
At a more general level, Johnson's detailed character descriptions of the ringleaders of Freedom Five, Dianne and John, portray them as well-read, intelligent misfits who dislike others, have a capacity for cruelty, and also dislike themselves. It's hard not to relate this to what is known of Johnson: a clearly intelligent and well-read man, but with a reported tendency to verbal cruelty, and a self-destructive alcohol habit.
These connections reinforce my feeling that Freedom Five, especially its older members, are not literally children nor even "childish". In my view, they are expressions of the author's own 'dark side'. 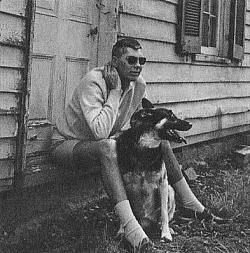 Cruz, the Hispanic 'Picker', is an interesting character. Johnson scarcely describes him physically; he is a dim figure portrayed by a few terse lines, his slow calm ironic manner, and how John Randall is scared of him - "they were enemies ... in the Picker, he had seen what men are and boys only hope to be" - and ultimately kills him with a shotgun. Given how tempting it is to identify the boat-loving John with Mendal ("Johnny") Johnson, perhaps Cruz is a description of the father with whom Johnson had "childhood conflicts"? This leads in the direction of a massively Freudian interpretation of the events in LGPATA, especially if (as I suspect) Johnson's mother was the "member of his immediate family" who, like Barbara, played the piano. Then again, the description of Cruz sitting "back solidly against the boards of the tenant house" recalls the rear cover photo of Johnson himself.

One correspondent has pointed out to me that Johnson clearly knew a lot about bondage ("LGPATA includes scenarios and techniques that are staples in bondage pornography, but unknown or glossed over in mainstream fiction and movies") and argued that Johnson even hints at approval for a BDSM lifestyle in the "cryptic reference" to Ted, Barbara's nominal boyfriend.
At the need of LGPATA, Ted "... wondered what it would have been like to do *that* to her. Simply by having the thought, he changed his own life. He knew himself, and that is a sort of death in itself. He would mave made a good but rather a strange husband for her." I agree that Johnson's implication appears to be that Ted realised he had sadistic tendencies, and that this would have been the 'strange' aspect in his good marriage to Barbara.
Well, maybe... Authentic detail merely proves that Johnson researched his novel properly (after all, Thomas Harris knows a lot about serial killers, but clearly isn't one!) Even so, as LGPATA includes other autobiographical elements, I'm inclined to wonder if bondage had some personal significance for Johnson. But, I stress, this is on no biographical evidence whatever; perhaps, being a keen sailor, he just knew a lot about knots.

Addendum: Dec 13th 2011 - Mendal Johnson speaks
After all that speculation, I managed to find a newspaper interview in which Johnson discusses his intentions behind the book.

For a first-book author, someone just beginning to test the waters of literary endeavor, Mendal W. "Johnny" Johnson is very sure about what he has done, what he plans to do and how he plans to do it.

The author of "Let's Go Play Games at the Adams," [sic] a macabre thriller published last month, is a man who grew up in the newspaper and writing trade but obviously enjoys being on the other side of an interview. A resident of Annapolis since 194? with a love for boating and the sea, the 4? year-old writer set his story in the rural serenity of Maryland's Eastern Shore, a serenity that is quickly shattered by the fast-moving action of his plot. "Games" is a story about -- though hardly for -- children, five children in particular ranging in age from 10 to 17 who chloroform and take captive the captive the 20-year-old babysitter of two of them, perform sexual and mental tortures on the girl and eventually kill her.

It is not a pretty story. For Mr. Johnson, though, "Games" is more than a story. He sees the book as a political allegory with a point that he admits is probably lost on most readers. Barbara, the victimized babysitter, represents the American left, the "dreaming left" who is abused and killed. Adults, who have no part in the action of the plot and never know what happened, are the political right. "And what's left," the author explained, "is the 'great silent American majority' that supposedly runs things in its odd and unpredictable fashion," the American middle that Mr. Johnson thinks of as the "American muddle".

Mr. Johnson chose children to represent middle America "out of purest spite." No one wins in the book: the left gets killed, the right gets duped and the middle, he indicates, the children, will eventually crack as they grow up.
...
The children all are characterizations of people he grew up with but Barbara was the one who "got to him" in the end. Barbara was never a person," he said. "She was a political image, a totem. But she got to be so real to me that in the end I tried to get out of killing her. "I came close to being a complete alcoholic by the time I finished the book. I couldn't let go of my typewriter, but I didn't want to hear what my typewriter had to say. I wanted to save her, but if I saved her, I couldn't save the story."

Mr. Johnson sees his book as a harmonic blending of various levels of understanding. In addition to the narrative plot level, the suspenseful playing out of the action and the political message, the book is also making a philosophical statement. "If one cannot possibly win the game of life," he said, "there runs a statement of life, a cognizance of a state in which we exist. It runs exactly counter to our Western way of thinking and it hurts like hell." The ultimate message, he added, "is we aren't getting anywhere."

The fact that his theme is lost on most of his readers does not bother Johnny Johnson. "I think the book stands on its own without the allegorical level," he said. "Most people who read the book don't know what it's about. They don't know they' ve been hit and I can't tell them. If I want to hit you with an invisible weapon you've never seen, all you're going to end up with is a hell of a headache."

It looks, then, as if Peter Harris is on the right track with his theory that LGPATA reflects the zeitgeist of the time it was written. Nevertheless, an author's conscious intentions, and how they choose to portray a book's intentions in an interview, aren't necessarily the full story.