Dr Johnson as he really was 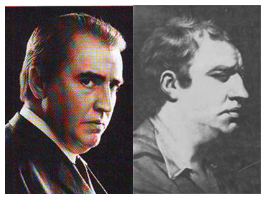 This is pure trivia, but I was struck this week by what a good casting Alfred Molina would make for Samuel Johnson. His picture, left, from the 24th November Radio Times shows a striking resemblance to Johnson as portrayed in the Sir Joshua Reynolds portrait, circa 1769, NPG 1445 in the National Portrait Gallery. You can see a bigger version on the cover of this CDC publication, and a different version of the same portrait here.

Less trivially, much as I admire Robbie Coltrane's memorable portrayals of Johnson both in the Blackadder episode Ink and Incapability and the serious 1993 drama, Boswell & Johnson's Tour of the Western Isles, we have yet to see an attempt to portray Johnson as he truly was. The central omission is Johnson's documented mannerisms. This Journal of the Royal Society of Medicine paper, Doctor Samuel Johnson: 'the great convulsionary' a victim of Gilles de la Tourette's syndrome, provides extensive contemporary documentation, by Boswell and others, that Johnson suffered from a wide variety of tics and strange physical mannerisms, along with complex rituals and repetitive behaviours, consistent with Tourette's syndrome. This syndrome is also associated, in many cases, with creativity and quickness of thought consistent with Johnson's reputation for wit and clever disputation.

Even if you disagree with this specific diagnosis, the descriptions are clear enough to show that the standard portrayal of Johnson - stolid, pompous, with no abnormality of mannerism - is simply way off the mark. It would be interesting to see some production attempting to accurately portray this aspect of Johnson, which was fundamental to his personality and how others viewed him. It would require a tour de force of acting to do so, but not an impossible one (compare Daniel Day Lewis's engaging portrayal of Christie Brown in My Left Foot). The problem would be that going against a stereotype always carries the risk of being unbelievable.

Email ThisBlogThis!Share to TwitterShare to FacebookShare to Pinterest
Labels: drjohnson