How calmly does the orange branch

It still amazes me what can be found on the Internet. Above, on YouTube, is Nonno's poem from the film of Tennessee Williams' Night of the Iguana. (For those who don't know the play or film, Nonno is a 97-year-old old poet who travels the world with his granddaughter, the pair hustling money from hotel guests). The full text is here; it's one of the most poignant poems about mortality I know of. (For some reason, the film replaced the phrase "orange branch" with "olive branch"). Overshadowed by his better-known reputation as a playwright, Williams' poetry deserves to be better known: you can preview the Collected Poems at Google Books. Williams - real name Thomas Lanier Williams III - also wrote a good many short stories, some outside his usual genre. For instance, his first published story, The Vengeance of Nitocris, appeared in the pulp magazine Weird Tales, and his Desire and the Black Masseur is a classic of horror, sufficiently so to be included in Peter Haining's anthology of "the world's most horrible horror stories", The Unspeakable People.

Nevertheless, Williams' genre stories are still themetically connected with his other works. The almost certainly fictional Nitocris, whose single anecdote in Herodotus has led to her characterisation as a Caligula of Pharaohs with horror writers such as HP Lovecraft, takes revenge because her brother has been torn to pieces, and themes of similar violence (and cannibalism) appear in Desire and the Black Masseur and the play Suddenly, Last Summer. As Rethinking Literary Biography: A Postmodern Approach to Tennessee Williams points out, Williams' works draw heavily on the author's own life. For instance, it's hard not to connect the insanity of Blanche Dubois in Streetcar and the threatened lobotomy of Catherine in Suddenly, Last Summer with the the fate of Williams' sister Rose and Williams' own depression and self-doubt as revealed in his notebooks (see The blue devils of Tennessee Williams).

It has frequently been commented that Williams' works only contained veiled references to his homosexuality (for example, in Cat on a Hot Tin Roof we only suspect that a closer relationship than friendship explains Brick Pollitt's descent into alcoholism after the suicide of his friend Skipper). However, this appears only to be the case for the high-profile plays, and Randy Gener shows in New York Times piece, Suddenly That Summer, Out of the Closet, that Williams wrote more freely in lesser-known works such as the recently-discovered The Parade, or Approaching the End of a Summer. 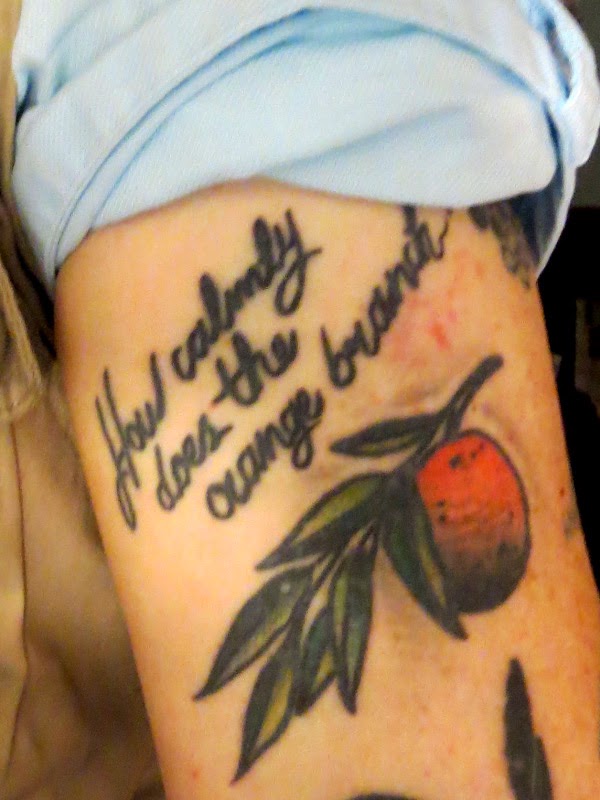 Addendum
I like the poem's theme - asking for strength in the face of mortality - so much that in 2013 had a tattoo of the first line and a stylised orange branch. In 2012, I was diagnosed with incurable cancer, and I find the poem very inspiring. See It ain't that kind: a year on for the general story.

O Courage, could you not as well
Select a second place to dwell,
Not only in that golden tree
But in the frightened heart of me?