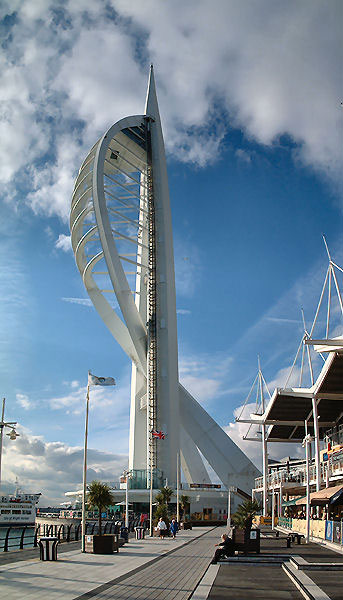 Above: Spinnaker Tower, Portsmouth. Below: panorama of View Deck 1, with views over Portsmouth, Solent, Isle of Wight and Gosport. Both images created with AutoStitch - click to enlarge.

An ideal caption for these holiday snaps of the Spinnaker Tower, where on Tuesday Clare and I were lucky enough to get the combination of good weather and the view deck to ourselves, might be "Two on a Tower" (Gutenberg e-text 3146) the title of one of Thomas Hardy's lesser-known novels. The story of a doomed romance between a young astronomer, Swithin St. Cleeve, and the unhappily married Lady Viviette Constantine, its obscurity probably comes down to its lacking the common touch and the considerable geekiness of subject matter. As this Lablit article says - Thomas Hardy, Richard Proctor and the dialogue of the deaf, Nicholas Russell 18 February 2006 - "Hardy told the naturalist Edmund Gosse that he wanted to make science itself the vehicle for the novel", and this is in considerable contrast to Hardy's generally rustic cast of characters. (The tower in Hardy's book was modelled on Charborough Tower).

By coincidence, the The Lord of the Rings film trilogy has just been on UK television, and I find the towers in Middle Earth fairly worrying. If you look at the real world, prior to steel construction, masonry has fairly strict limits. The Tallest Tower: Eiffel And The Belle Epoque (Joseph Harriss, Unlimited Publishing LLC, 2004, ISBN 1588321045, p11) discusses the background that led Eiffel to reject masonry. At the time, the Washington Monument was the world's tallest stone structure at 555 feet; this has since been topped by the 570-foot San Jacinto Tower. The Anaconda Smelter Stack is even taller at 585 feet (though not technically a building).

In Lord of the Rings, Saruman's tower Orthanc is in similar league at 500 feet, and Sauron's Barad-dûr even bigger. The especially worrying point engineering-wise, even assuming competent construction, is that Mount Doom, an active volcano, is quite close to both, showing that the region is at a crustal plate margin, therefore earthquake-prone. Tolkien wisely improves the stability by magical handwaving; according to Elrond, Barad-dûr's foundations "were made with the power of the Ring" suggesting it to be artificially stabilised (which would explain why it inexplicably collapses when the Ring is destroyed); and Orthanc's construction involved "four many-sided columns of rock joined together by an unknown process and then hardened". Handy.