From Academi (and elsewhere), Toad's Brave New World, a competition by The River & Rowing Museum

"to re-frame Kenneth Grahame’s famous book for the 21st Century by creating a short story (under 4,000 words) in a contemporary riverside setting which reflects a drastically changing world"


Ideas given include online dating, the credit crunch, environmental change, and so on. It's stressed that

"Entries don’t have to be about the River Thames, they can be about World Rivers and even mythical and fictional rivers. The brief is wide open for interpretation!"


Again, this looks interesting, though with a minor limitation that - looking at the small print in the entry form (PDF) - the readership for the story is age 5-16.

Meanwhile, the winner has been announced of the The Wind in the Willows Cover Competition, which asked young artists to illustrate the cover of the Vintage Classics centenary edition. The entry by Harry Jones was deservedly the winner, but all of the top four have very sophisticated composition (see the Times slideshow). Winners have also been announced for the Kenneth Grahame Society's competition to write a sequel, prequel or countertext to Wind in the Willows. The anthology will be published around March 8th 2009 (the 150th anniversary of Kenneth Grahame’s birth).

See the previous posts Wild at heart and Something wild for background. 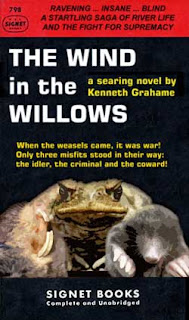 Addendum: you might be amused by my attempt, inspired by examples found for the Lurid classics post, at a pulp-style WITW cover.

The promised anthology from the Kenneth Grahame Society Competition came out a few months later than expected. The Society has also removed the discussion forum from its website.

The Kenneth Grahame Society Forum finally closed. It existed for about two years, and it had some interesting discussions and information. However, it was only used by a very small minority of the membership, and it often remained dormant for months at a time. At the 2009 AGM in Oxford it was agreed that the Forum, in such a dormant state, was no great credit to the name of Kenneth Grahame, and the decision to close it was approved. We would like to thank everyone who contributed postings to it over the years. All the information on it has been saved, and some of that will be repackaged and placed on the main website during forthcoming updates to the website.

Clare and I will admit to feeling a trifle miffed at not getting anywhere in this competition; mine (a countertext that retold Heart of Darkness as a post-apocalyptic river journey with Kim Newman style intertextuality) was trying a bit too hard to be clever, but Clare is regularly placed in writing competitions, and I thought her story (which used the WITW setting for a parable about xenophobia and global warming) could be faulted: it was heartwarming and stylistically impeccable. Honestly, it's not just sour grapes - the Society's handling of the anthology seemed a bit peculiar. The delay in publication, they explained on the now-defunct forum, was because some of the entries they'd chosen to anthologise weren't up to anthology standard, and needed work in collaboration with the Society to revise them. Seems to me that they shouldn't have been chosen, then ...

Addendum: I decided, rather than let my story languish on my computer, to post it here. See the update Wild at Heart.

Email ThisBlogThis!Share to TwitterShare to FacebookShare to Pinterest
Labels: witw