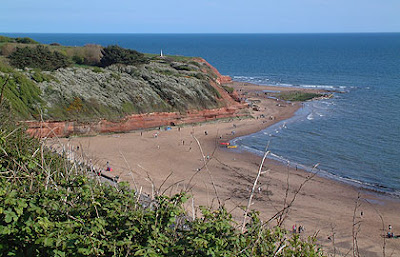 Easter Sunday: lovely weather here, so we went to Exmouth for the afternoon (very nice round walk along the beach to Sandy Bay, then back to Exmouth along the clifftop over the High Land of Orcombe). I must explore there a bit more some time; I've mentioned before being an enthusiast of chines 1 and found at least two near Orcombe Point. One is directly adjacent to the Geoneedle (see Google Maps - a tiny stream starting at the path leds to a deeply incised gully that ends at the cliff edge), and there appears to be a second here, visible from the beach; and the route down to the steps at Rodney Point appears to follow a third.

Geological geekiness aside, before moving to Devon I didn't realise the backstory to the existence of the string of southern Devon resorts such as Exmouth: check out Google Books for Overflowing with fashionables: South Devon Resorts, 1789-1815. This whole-chapter preview of The rise of the Devon seaside resorts 1750-1900 (John F. Travis, University of Exeter Press, 1993, ISBN 0859893928) tells how they largely sprang from upper-crust English holidaymakers seeking alternatives to French destinations made unsafe by the French Revolution, and continued to attract that class of visitor and resident. As such, Exmouth has a large collection of blue plaque locations, such as the past homes of Lady Nelson and Lady Byron - who lived there with her daughter Ada, later to become Augusta Ada King, Countess of Lovelace, of computing fame - but unlike Sidmouth and Seaton, it seems to have relatively few direct literary associations. With such a high celebrity count, it's not hard to find peripheral connections. For instance , Frances Burney's 2 friend Marianne Francis lived in Exmouth: their mutual friend Hester Lynch Piozzi (i.e. Dr Johnson's friend Hester Thrale) visited Exmouth with her new husband in 1788; they wrote an "Occasional Prologue" for the local theatre.

By many a wave and many a tempest tost,
Our shipwreck'd hopes are cast on Devon's coast
Where the soft season swells the ripening grain,
And verdure brightens with refreshing rain;
Where lightnings never glare, nor thunders roar,
And chilling blasts forget their freezing power.

Exmouth gets peripheral mention in Hilaire Belloc's On (see onbelloc00belluoft, Internet Archive) in which the short essay "Off Exmouth" laments, as Belloc saw it, the lack of descriptions of England seen from the sea.

That strange, that ever novel, that magical thing — the aspect of one's own land from the sea — is passing out of the literature of the English. I wonder whj' ? I wondered at it the more last week when I went down the coast of Dorset and Devon in my boat under a brilliant sky with a happy north-east following wind and
saw the splendid regiment of cliffs martialled in its vast curve eastward from Strait Point to that faint and doubtful wedge on the horizon which was Portland Bill.

Of landscape from within the land our modern literature has had far more than enough, a surfeit and a gorge of it. The theme came tumbling in with the French Revolution and fairly boiled over. But though our time has all in its favour for catching once again the marvel, the unique emotion, which fills a man when he sees his own land from the sea, for some reason the aspect is forgotten.


Direct associations are thinner on the ground, but they include the poet and writer Patricia Beer, who was born in Exmouth; and the Delderfields. Interesting family, the latter. As the Archives Hub summary says - see Delderfield Papers - they moved to Exmouth in 1923 when William James Delderfield, became publisher of the Exmouth Chronicle, and his two sons, Ronald Frederick and Eric, both became writers. The former was the prolific novelist best known as RF Delderfield (still very readable books specialising, as this NYT review of the televised Diana says, "in stories about young men rising from humble beginnings to positions of assorted prominence"). The latter became a writer of highly successful regional guidebooks (see Eric R Delderfield and Exmoor).

Quick Googling finds HH Munro ("Saki") went to Pencarwick School, Exmouth. There are least two modern novelists who live in Exmouth: the romance novelist Margaret James; and Graham Hurley (though his original home town, where his DI Joe Faraday series of crime novels is set, is Portsmouth). If you know of other writers with a connection, past or present, do add a comment.

Addendum. New addition: Alex Wade, writer, freelance journalist and occasional media lawyer. Author of Wrecking Machine: A Tale of Real Fights and White Collars, and Surf Nation: In Search of the Fast Lefts and Hollow Rights of Britain and Ireland, he went to St Peter's School and lived in Exmouth as a child before his parents moved to Budleigh. He's now a Times columnist, but worked for the Exmouth Journal for an while. He recently wrote about Exmouth's A La Ronde in the Times: seeThe Coaster: a 16-sided basilica in Devon. His column, The Coaster, is worth reading for its historical/literary snapshots of British ports and harbours.
- Ray

1. See The disappearing chine and Seaton, slips and Sabine Baring-Gould.
2. A much under-rated writer, of huge personal courage: see The iron pen: Frances Burney and the politics of women's writing (Julia Epstein, Univ of Wisconsin Press, 1989, ISBN 0299119440) whose preview contains much of Burney's account of her radical mastectomy, performed with a wine cordial, possibly containing laudanum, as sole anaesthetic.
at 17:07