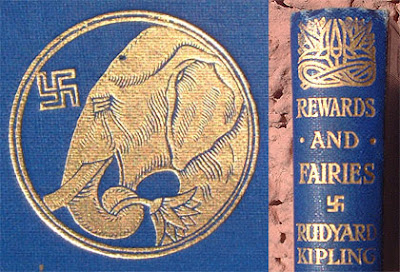 Further to The Urge to Preserve, Weathercasting, the Anthropology of Mud, and Mapping Nipple Church at Unreal Nature and discussion at The hunger games at The Growlery (both of which impinged on swastikas) I just dusted off my copy of the 1920 Macmillan edition of Kipling's 1910 Rewards and Fairies (see Gutenberg EText-No. 556). This sequel to Puck of Pook's Hill 1 has nice examples of the swastika logo that appears on editions of Kipling works prior to the mid-1930s.

As the Kipling Society's Kipling and the swastika page tells, the Society frequently has to field the question of whether Kipling was a Nazi, and the answer is clear: this swastika, shown alongside an elephant representing Ganesha with a lotus flower, is used in its context as a Hindu good luck symbol. Arising from Kipling's familiarity with Indian culture and history, it was his trademark for some 40 years until he discontinued it when the swastika became associated with Nazism.

It's well-known that the swastika (aka fylfot, tetraskelion, gammadion, et al) is an astonishingly ancient symbol: see Wikipedia's swastika article and Symbols.com. What's less known is its ubiquity in Western culture immediately prior to its Nazi use, as listed at Western use of the Swastika in the early 20th century. Kipling's use wasn't even particularly unusual; the Fylfot File has articles on swastikas in surprising places such as Cambridge churches and Scottish World War I memorials (.PDF). There does seem to have been a widespread craze in the late 19th and early 20th centuries - perhaps from a general fascination with shared Western cultural roots. The Nazi movement's grasp of propaganda was adroit, and from that point of view, hijacking the swastika as an emblem was appallingly brilliant.

Over 50 years later, we're left with difficult cultural fallout, with the issues exemplified by the German Strafgesetzbuch § 86a criminal code; this bans it except for scholarly and religious use (the latter, particularly, refers to Hindus and Buddhists, for whom it continues to be a traditional and benign emblem). But it's not far less inflammatory elsewhere, as shown by a stream of news items such as Swastikas on bank floor (The Bolton News, 23rd April 2006), about the local controversy over tiled swastika logos in the 1927-built premises of a Bolton bank.

There are, however, groups working to reclaim the swastika: see, for instance, Hindus reclaim their symbol of life (Ruth Gledhill, The Times, January 19, 2005) and the Reclaim the Swastika website. One of the boldest attempts is by the Canadian artist, mystic and lecturer ManWoman (birth name Patrick Charles Kemball) whose goal is "to begin a change of thought that will return the swastika back to its rightful place". His book Gentle Swastika: Reclaiming the Innocence collects many examples worldwide of harmless use of the swastika, historical and present-day. (He mentions Kipling, as well as Carlsberg Beer, whose Elephant Gate used swastikas similarly). He himself is heavily tattooed with swastikas in the styles of its sacred use in many cultures. He says of it:

How can a symbol be guilty for the acts of a madman?
This website has no connections to any racist propaganda. We do not deny the pain and anguish of the Second World War and the Holocaust. We feel that the time is ripe to put the Nazi decade into the proper context in full view of the ten thousand years of suppressed swastika history and to let the Swastika get on with its benign life. We invite Jews, and all others affected by the war, to look at the evidence for the existence of a sacred Swastika in the world.


The authors of some other books on the swastika - notably The swastika: symbol beyond redemption? (Steven Heller, Jeff Roth, Allworth Communications, Inc., 2000, ISBN 1581150415) and The swastika: constructing the symbol, Malcolm Quinn, Routledge, 1994, ISBN 041510095X) are generally more pessimistic about the chances of redemption for the swastika. (But personally, I think it's a very worthy aim).

Meanwhile, the swastika (and Nazi regalia in general) remains a very powerful meme, an instant shorthand for totalitarian evil. As I mentioned at The Growlery, even the subliminal hint of a swastika shape and strong allusion in colouring in the UK cover of Suzanne Collins' The Hunger Game is enough to tell us what kind of world it's set in (a totalitarian future America); and likewise the many even more overt allusions, many closely modelled on Leni Riefenstahl's Triumph des Willens, in Paul Verhoeven's controversial Starship Troopers film - see Bug-hunts and militarism previously, and The Reich Stuff (Bejamin Svetkey, Movie News, #406 Nov 21, 1997).

While watching Starship Troopers on BBC1 a few days ago, I just remembered a different satire on the appeal of Nazism: Norman Spinrad's The Iron Dream (Avon, 1972). Check out the reviews by Thomas M. Wagner (SF Reviews.Net, 1999) and Ursula Le Guin (Science Fiction Studies, Vol 1, Part 1, Spring 1973). It's set in a alternative timeline in which Adolf Hitler emigrated and became a pulp writer who wrote a Hugo-winning sword-and-sorcery novel, Lord of the Swastika. At one level it's Swiftian satire: in a scholarly analysis the fictitious Homer Whipple analyses the text of Lord of the Swastika, its mass rallies and phallic symbolism, and concludes "Obviously, such a mass national psychosis could never occur in the real world". And yet Lord of the Swastika tells the real-world Hitler's rise to power seen through a Mary Sue fantasy filter. Spinrad's further point is to make explicit connection between the tropes of fantasy fiction and of Nazism: such as macho triumph over subhumans. It's worth finding. Bizarrely, as Spinrad tells in his SF cultural/litcrit book Science fiction in the real world (Southern Illinois University Press, 1990, ISBN 0809315386), there were those who didn't get the ironic intent: he found the book on the American Nazi Party's reading list, and also commented:

To make damn sure that even the historically naive and entirely unselfaware reader got the point, I appended a phony critical analysis of Lord of the Swastika, in which the psychopathology of Hitler’s saga was spelled out by a tendentious pedant in words of one syllable.

Almost everyone got the point…

And yet one review appeared in a fanzine that really gave me pause. "This is a rousing adventure story and I really enjoyed it," the gist of it went. "Why did Spinrad have to spoil the fun with all this muck about Hitler?"

1. In both books, Puck, the last surviving fairy, introduces two Pevensey children, Dan and Una, to various historical figures who tell stories of their times. Rewards and Fairies contains two of Kipling's best-known poems, "If--" and "The Way through the Woods".