Life and death in Budleigh

And so to Budleigh. On Sunday we walked the Budleigh Salterton to Exmouth section of the South West Coast Path; the above picture shows the view back across Budleigh and Lyme Bay from the highest point at that section, West Down Beacon. Budleigh, especially on a Sunday, lives up to its quiet, genteel style that was ridiculed by Noel Coward in Blithe Spirit:

Elvira: Nobody but a monumental bore would have thought of having a honeymoon at Budleigh Salterton.
Charles: What's the matter with Budleigh Salterton?
Elvira: I was an eager young bride, Charles - I wanted glamour, and music and romance — all I got was all I got was potted palms, seven hours of every day on a damp golf course and a three-piece orchestra playing "Merrie England".


Its chief famous connection is, of course, that Sir Walter Raleigh was born near East Budleigh and brought up there (as famously depicted at a still-recognisable location in The Boyhood of Raleigh by Millais). Raleigh was, it's often forgotten, a writer as well as explorer: see The Works of Sir Walter Ralegh, Kt : Miscellaneous works. Other literary connections are harder to find. The forthcoming Budleigh Salterton Literary Festival will focus on Thomas Adolphus Trollope (journalist, travel writer and brother of Anthony Trollope - check out Villino Trollope) who spent his later years in Budleigh. George Gissing, who spent time in Budleigh for his health, used it as a setting for his novel Born in Exile (Gutenberg EText-No. 4526), though the book is conversation-heavy and little interested in location descriptions. One might almost suspect Gissing of sending his hero up West Down Beacon at night to avoid having to describe the view:

Early in the evening there was a temporary lull in the storm; rain no longer fell, and in spaces of the rushing sky a few stars showed themselves. Unable to rest at the hotel, Peak set out for a walk towards the cliff summit called Westdown Beacon; he could see little more than black vacancies, but a struggle with the wind suited his temper, and he enjoyed the incessant roar of surf in the darkness. After an hour of this buffeting he returned to the beach, and stood as close as possible to the fierce breakers. No person was in sight.


A skim of the Oxford Dictionary of National Biography and NewsBank finds a few others, such as the Budleigh-born bibliographer Robert Proctor, inventor of the "Proctor order" for cataloguing pre-1500 books (see John Bowman on Robert Proctor at Tom Roper's Weblog); and the artist and author Joyce Dennys, who lived in Budleigh through both World Wars, drawing propaganda art in WW1 and turning to writing in WW2, when her long career began with the funny and somewhat subversive "Henrietta" ("a 1940s Adrienne Mole") letters about wartime life in a small Devon town. Written for the Sketch magazine, these were later collated as Henrietta’s War; news from the home front 1939-1942, shortly due for republication (see the Bloomsbury page).

There's also the prolific novelist (Henry) Hawley Smart, who also lived in Budleigh in later life. Smart was a career soldier who served in Crimea and in India during the Mutiny, bought his way out of the Army, then turned to novel-writing following gambling losses at horse races. At the Circulating Library has a partial bibliography of his some 38 novels, and some are online at the Internet Archive (search for creator "Hawley Smart"). Many draw on his turf experiences; he was a sort of Victorian Dick Francis. Another little-remembered writer who died in Budleigh is "Headon Hill" (Francis Edward Grainger, 1857-1927, author of the Holmesian "Zambra" detective stories).

A number of sources, such as the Rough Guide to England, say there's a PG Wodehouse connection to Budleigh, but as Devon Perspectives says, verification is yet to be found. See the following post, Life and death in Bludleigh, for a probable explanation.

Aside 1: Given Budleigh's reputation as a "waiting-room", it's probably appropriate that one of Hawley Smart's works is the 1881 short novel The Great Tontine (Internet Archive greattontine00smargoog), which tells of skulduggery surrounding the last survivors of a tontine, an obsolete investment system whose best-known form involves a mutual fund whose capital goes to the last surviving investor. To Victorian writers, this was a gift as a plot device - see, for instance, The Wrong Box, co-written by Robert Louis Stevenson and Lloyd Osbourne (Gutenberg EText-No. 1585). But check out A Short History of Tontines (McKeever, Kent, A Short History of Tontines, February 9, 2009. Available at SSRN), an interesting paper which argues that the tontine doesn't deserve its shadowy reputation. 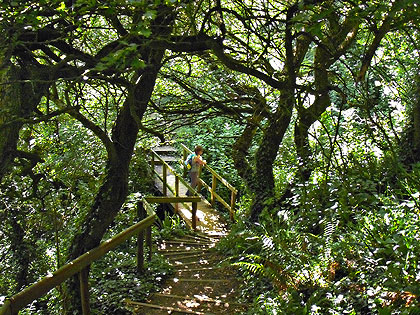 Aside 2: Chine-spotting again. On the Isle of Wight, even the smallest of these delightful micro-valleys have names, and I find it surprising that in East Devon they mostly don't (or else they've been forgotten). The coastal path between Budleigh and Sandy Bay crosses two of these chines, neither of which are mentioned in geological accounts such as Ian West's Budleigh Salterton, and Littleham Cove, East Devon - Geology Field Guide. The botanist Edwin Lees, however, describes the terrain vividly in his Notices of the Flowering Time and Localities of some Plants observed during an Excursion through a portion of South Devon, in June, 1851.

The one here, just west of Budleigh, I've just discovered from Old Maps to be called Sherbrook Chine; it features on a few early postcards of Budleigh, and is called the "Sherbrook ravine" in the Devonshire Association's 1890 Notes on the parish of East Budleigh.  The pamphlet Budleigh Salterton - as it used to be (Richard D Woodall, 1954) shows that it provided access to the beach then ("In Victorian times ... Access to the beach at Sherbrooke Chine was then much easier").  Perhaps it's overlooked now because it's very overgrown with woodland, and its nature isn't obvious to the casual observer on the Coast Path. This other chine, pictured above, I haven't so far been able to name. Here, not far from the Sandy Bay mobile home park, the Coast Path dips into an amazing moist microclimate, all rustling leaves, ferns and birdsong, compressed into a tiny but deep valley only about 130 yards long that ends abruptly at the cliff edge above Littleham Cove. It's most surprising that such a distinctive and charming location has no name.