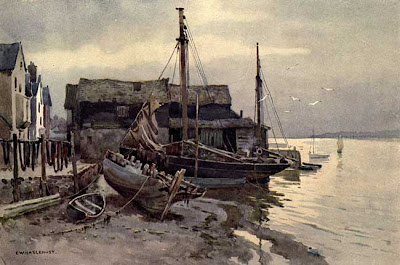 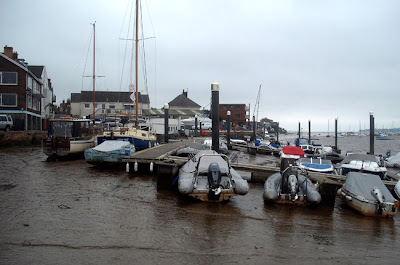 I couldn't reproduce the exact viewpoint, which is somewhere now in mid-air, the location of a no-longer-extant pier.

A rather nice image I just found online; a watercolour c. 1912 of the still-recognisable shoreline of Ferry Road, Topsham, by EW Haslehust, from Sidney Heath's Exeter (Blackie, 1912, Gutenberg EText-No. 24635). The picture was in the old Steam Packet pub, now Route 2; I'm not sure if it was the original or a good print, but I know the current owner of the picture, and will ask. I was interested in finding more about the artist, and the Times obit supplied the details:

Ernest William Haslehust was the eldest son of William Henry Haslehust, of Lee, Kent, and was born at Walthamstow, Essex, in 1866. He was educated at Felsted and studied art at the Slade School under Legros. A man of wide interests, his recreations included gardening, carpentering, and the making of scientific instruments, and he belonged to a bewildering number of societies, both artistic and scientific. Besides taking part in the exhibitions of the societies of which he was a member, Haslehust was a regular exhibitor of water-colours at the Royal Academy. In 1932 a picture of his was given a place of honour in the water-colour section and was afterwards purchased by the Newport Corporation, Monmouthshire, for their public gallery. He is also represented in the permanent collections of Oldham, Bootle, Huddersfield, Lincoln, Sheffield, Swansea, Bristol, Port Elizabeth, Colombo, Vancouver City, and Auckland. He designed landscape posters for the LNER, and in 1932 a one-man show of his water-colours was held at the Greatorex Gallery. He also contributed 60 illustrations in colour to a book on "The Silvery Thames", and water-colours by him have been reproduced in the Illustrated London News, the Studio, the Tatler, and many other magazines. Haslehust was a capable landscape artist, chiefly in water-colour, with a good eye for a subject. Like most professed lovers of nature he was inclined to prettify his subjects, particularly in colour, but the clearness and directness of his method won professional respect and made him an excellent guide to the fumbling amateur. Haslehust was very prolific. He was probably most familiar to the general public as an illustrator of books in colour, having contributed pictures to no fewer than 36 volumes in Messrs. Black's "Beautiful Britain" series. Haslehust was not a great artist, but his work gave pleasure to a great many people. He knew his limited job thoroughly, and his scientific habit of mind enabled him to explain it clearly to others.
- Obituary, The Times, Friday, Jul 08, 1949

A number of the Blackie "Beatiful England" series ilustrated by Haslehust are on Project Gutenberg (the HTML versions include images) and the Internet Archive. Just dipping, I very much like his paintings of Branksome Chine, Poole Harbour, Chalk (the house where Dickens spent his honeymoon), Rochester from Strood, and Mol's Coffee House, Exeter. There are many more online - do a Google image search - such as this moody Folkestone - Above the Fishing Harbour in the collection of Auckland Art Gallery. The Picture Parlour, which sells prints on eBay, has a large collection of Haslehust topographic images: the Isle of Wight ones are interesting, such as Blackgang Chine while it still existed as a topographic feature, and Newport from the Medina, a surprisingly unprettified view showing it warts-and-all as an industrialised river port.

BTW, a number of sources mistakenly correct Haslehust's surname to "Haslehurst". It ain't: both the signatures on his paintings and the credits in multiple books he illustrated are "Haslehust".

Addendum Unsurprisingly, given the genre in which he worked, Haslehust was a traditionalist in art. Digging in newspaper archives finds a juicy arts controversy of the 1940s, when he was a co-signatory to a letter to the Times criticising CEMA (Council for the Encouragement of Music and the Arts - which became the Arts Council after World War II).

Sir, - On February 15 a question was asked in the House of Commons [see Hansard] by Captain Alan Graham. It asked whether, in view of the poor quality and debasing effect of the pictorial art evinced at the exhibitions provided by C.E.M.A., the yearly grant from the Treasury to this institution of £100,000 could be reduced, or, at least, that any future financial support could be confined to the musical and dramatic activities.

We, the undersigned, are of opinion that Captain Graham has postulated a state of things true to the facts. For the most part the exhibitions comprise paintings devised to carry on the baleful influence of what is known as "modernistic" art. This is a subversive movement which, with its several "isms", has been for many years endeavouring to undermine the traditional glories of painting and sculpture, thus to lower the standards of artistic ideas and technical performance. The exhibitions alluded to in the question seek to promulgate these disastrous ideas by means of attendant lecturers engaged to persuade the public who visit these shows that the works they repudiate and protest against, orally and in the Press, are nevertheless admirable.

In view of the amount of public money spent on this promulgation of objectionable painting and sculpture, we declare ourselves in sympathy with Captain Graham's laudable attempt to amend the evil by the double means of reducing national expenditure and openly opposing the aforesaid organized activities for a lowering of art standards.

The letter got a robust response a few days later.


Sir, - The letter under the heading "C.E.M.A. and Modern Art" came as a shock. Of course the average age of the signatories of the letter must be biblical three score years and ten, but years do not seem to have added wisdom.

That at this date "modernistic" art should still be dubbed "subversive" shows that the childish mentality of Doctor Goebbels and his "Bolshevist bogy" is also prevalent elsewhere. The exhibitions organized by C.E.M.A. have done most excellent work in educating the public to think about and comprehend all phases of art, including the latest developments. Lecturers have told me that the public is keen and intensely interested (that is, at least, those under 50 years of age). The questions asked have been intelligent and the attendances constantly increasing.

The artists represented in the C.E.M.A. exhibitions have included all types now creating individual work in this country. The selection has been wide and catholic. There are various points of policy from time to time that one may disagree with, but the new effort of the Government through the Board of Education and C.E.M.A. should have the wholehearted cooperation of the artists of the country and not be crabbed by out-of-date criticism, based on no solid foundation, but on talk of subversion and "undermining the glories of painting and sculpture".

The so-called "modern" artists of to-day are genuine, sincere, creative painters whose work, however experimental it may seem to the narrow-minded experimentalist, is based on intellect and contains sound painting qualities of a far more subtle standard than most of the Victorians and Edwardians.
I am, Sir, yours truly,
RO Dunlop
- The Times, Wednesday, Mar 15, 1944

A bit of a fail on Godwin's Law there. But what a clash of cultures. Alan Graham must have been one of the last British MPs to use military rank as a title in civilian life, shades of the village squire; it'd be considered deeply ostentatious nowadays.

1. Sir Alfred Munnings. Wikipedia: "an outspoken enemy of Modernism ... Munnings was elected president of the Royal Academy of Art in 1944, a post he held until 1949. His presidency is most famous for the departing speech he gave in 1949, attacking modernism. The broadcast was heard by millions of listeners to BBC radio. An evidently inebriated Munnings claimed that the work of Cézanne, Matisse and Picasso had corrupted art".
2. Frank O Salisbury. Wikipedia: "His art was steadfastly conservative and he was a vitriolic critic of Modern Art – particularly of his contemporaries Picasso, Chagall and Mondrian".