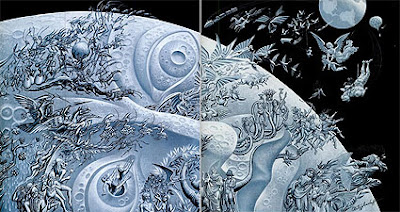 Further still relating to the link Bill Higgins sent, it's worth checking out the work of the Ukrainian-born artist Boris Artzybasheff (1899-1965). For some reason I'd never encountered his work before, and I'm sorry it took so long to make the acquaintance. It ranges from the near-photorealistic straight portraiture (though, more often than not, with surreal background elements) of his cover art for Time magazine to the highly surreal, such as the anthropomorphised machines of his Machinalia and Diablerie; his depictions of pathological mental states, Neurotica; and the nightmarish swastika-based fantasias of his anti-Nazi art for Time.

Life magazine also featured his artwork. See this Speaking of Pictures feature for 3rd November 1941; his explanation of flying saucers for 21st July 1947 (its biomorphic alien gun is remarkably reminiscent of the artwork of HR Giger, particularly the 'space-jockey' of Alien; the designs for improving the human form for 12th March 1951 (see man and woman); the previously-mentioned panorama of fictional Martians for 24th September 1956; and this similar panorama of fictional lunar creatures for 15th December 1958. See the Google Books magazine search option for many more.

Artzybasheff is further known for his book illustrations, such as those for Charles G Finney's forgotten classic The Circus of Dr Lao. His work is collected in a standalone book, As I See.

A striking collection of extraordinary images from one of the twentieth century’s most acclaimed and unique American artists. This fantastical collection teems with ironic imagery which documents our culture’s vanity, aggression, dreams, and neuroses with biting wit and wisdom. Boris Artzybasheff’s striking graphic style, which includes everything from grotesque experiments in anthropomorphism, to the depiction of vivid and extreme ranges of human psychology and emotion, is displayed to full effect in this seminal collection of his work. A stunning collection from an artist with a strong sense of design and humour!


Artzybasheff was the son of Mikhail Artsybashev (1878-1927, same surname - just different conventional transliteration). Artistic ability clearly ran in the family, as the latter went to art school. , However, Artsybashev instead turned a similar thematic interest in the outré to writing, producing short stories and novels - by turns amusing, subversive and horrific with their themes of sex, suicide and murder - that scandalised Russian society in the closing years of the Tsarist regime and were banned by the subsequent Soviet regime. His most popular novel was the 1907 Санин (transliterated as Sanin or Sanine) whose Wikipedia description deserves some kind of prize for the most misleadingly coy description of a novel:

Its hero, twentysomething Sanin, after a long absence from home, comes back to visit his mother and sister. During his stay he meets varied people, some of whom are neutral, amazed, threatened or excited by his way of thinking about the world and human existence. Sanin remains confident and self-assured and at the end of the book leaves town.

The Cornell Press blurb is more informative. The title character Sanin is an intellectual antihero who quietly goes around behaving with complete disregard for conventional morality:

The hero of Artsybashev's novel exhibits a set of new values to be contrasted with the morality of the older Russian intelligentsia. Sanin is an attractive, clever, powerful, life-loving man who is, at the same time, an amoral and carnal animal, bored both by politics and by religion. During the novel he lusts after his own sister, but defends her when she is betrayed by an arrogant officer; he deflowers an innocent-but-willing virgin; and encourages a Jewish friend to end his self-doubts by committing suicide.

At the time, the novel was denounced as pornographic, but it isn't remotely by modern standards; you can read it in translation at Project Gutenberg (EText-No. 9051). The cause for offence was that it appealed to, and appeared to encourage, the attitude of a disaffected generation in Russia who were cheesed off both with traditionalism and with the failure of political action to alter things. Sanin came out at the beginning of the "Period of Reaction" when pro-Tsarist factions were increasingly undermining progressive changes introduced after the 1905 Russian Revolution (though it wasn't written in response to this; it had been rejected by publishers in 1903).

Sanin appeared at the psychological moment, late in the year 1907. The Revolution was a failure, and it being impossible to fight the government or to obtain political liberty, people in Russia of all classes were ready for a revolt against moral law, the religion of self-denial, and all the conventions established by society, education, and the church. At this moment of general desperation and smouldering rage, appeared a work written with great power and great art, deifying the natural instincts of man, incarnating the spirit of liberty in a hero who despises all so-called morality as absurd tyranny. It was a bold attempt to marshal the animal instincts of humanity, terrifically strong as they are even in the best citizens, against every moral and prudential restraint. The effect of the book will probably not last very long, — already it has been called an ephemeral sensation, — but it was immediate and tremendous. It was especially powerful among university students and high school boys and girls — the "Sanin-morals" of undergraduates were alluded to in a speech in the Duma.

A number of other Mikhail Artsybashev works are online at the Internet Archive: search on creator:"Artsybashev, M. (Mikhail), 1878-1927". His first anthology, Tales of the Revolution, is characteristic of his style and themes.
- Ray
at 02:55