Following on from The Alabaster Coast previously, it'd be an omission to write about anything involving chalk cliffs and the poet Algernon Swinburne without exploring the factoid that he was the first to climb Culver Cliff. (some 500 feet up the chalk cliff face from beach level). I say "factoid" because although it's near-universally and uncritically repeated, the story lacks any reasonable standard of proof: the sole primary source for this exploit is a letter written years later by Swinburne himself.

Swinburne tells how at 17, after having been told by his family that he wouldn't be allowed to join the army, he set out to prove himself not a coward.


It was about the middle of the Christmas holidays, and I went out for a good hard tramp by the sea till I found myself at the foot of Culver Cliff; and then all at once it came upon me that it was all very well to fancy or dream of 'deadly danger' and forlorn hopes and cavalry charges, when I had never run any greater risk than a football 'rooge'; but that here was a chance of testing my nerve in face of death which could not be surpassed. So I climbed a rock under the highest point, and stripped, and climbed down again, and just took a souse into the sea to steady and strengthen my nerve, which I knew the sharp chill would, and climbed up again, thinking how easy it would be to climb" the whole face of the cliff naked—or at least how much more sure one would feel of being able to do it—if one did not mind mere scratches or bruises; but to that prehistoric sort of proceeding there were obviously other objections than the atmosphere of midwinter. So I dressed and went straight at it. It wasn't so hard as it looked, most of the way, for a light weight with a sure foot and a good steady head; but as I got near the top I remember thinking I should not like to have to climb down again. In a minute or two more I found that I must, as the top part (or top story) of the precipice came jutting out aslant above me for some feet. Even a real sea-gull1 could not have worked its way up without using or spreading its wings. So of course I felt I must not stop to think for one second, and began climbing down, hand under hand, as fast and as steadily as I could, till I reached the bottom, and (equally of course) began to look out for another possible point of ascent at the same height. As I began again I must own I felt like setting my teeth and swearing I would not come down again alive —if I did return to the foot of the cliff again it should be in a fragmentary condition, and there would not be much of me to pick up. I was most of the way up again when I heard a sudden sound as of loud music, reminding me instantly of 'the anthem' from the Eton Chapel organ, a little below me to the left. I knew it would be almost certain death to look down, and next minute there was no need: I glanced aside, and saw the opening of a great hollow in the upper cliff, out of which came swarming a perfect flock of 'the others,' [his idiolect for seagulls] who evidently had never seen a wingless brother so near the family quarters before. They rose all about me in a heaving cloud—at least, I really don't think the phrase exaggerates the density of their 'congregated wings'—and then scattered. It did flash across me for a minute how nasty it would be if they flew at me and went for my indefensible eyes; but, of course, they never thought of anything so unnatural and unfraternal. I was a little higher, quite near the top or well within hail of it, when I thought how queer it would be if my very scanty foothold gave way; and at that very minute it did (I assure you on my word of honour that this is the exact truth, strange as it sounds and is), and I swung in the air by my hands from a ledge on the cliff which just gave room for the fingers to cling and hold on. There was a projection of rock to the left at which I flung out my feet sideways and just reached it; this enabled me to get breath and crawl at full speed (so to say) up the remaining bit of cliff. At the top I had not strength enough left to turn or stir; I lay on my right side helpless, and just had time to think what a sell (and what an inevitable one) it would be if I were to roll back over the edge after all, when I became unconscious—as suddenly and utterly and painlessly as I did many years afterwards when I was 'picked up at sea' by a Norman fishing boat upwards of three miles (they told me) off the coast of Etretat, and could just clutch hold of the oar they held out; 'but that is not in this story—which I only hope is not too long for the reader.' On returning to conscious life I found a sheep's nose just over mine, and the poor good fellow creature's eyes gazing into my face with a look of such kindly pity and sympathy as well as surprise and perplexity that I never ought to have eaten a mutton-chop again.

I don't dismiss it entirely. As can be seen in this Flickr image by Ian Johnston - Culver Cliff - Spring Low tide - Close up and personal (5) - on the Sandown Bay side Culver is steep but not vertical, and its crumbly chalk somewhat stabilised by vegetation. But I wouldn't care to try it.  Swinburne doesn't say where this (alleged) climb took place, but the "great hollow in the upper cliff" sounds extremely like Hermit's Hole, a feature repeatedly mentioned in historical Isle of Wight travelogues.  It was accessed by a notch in the clifftop: 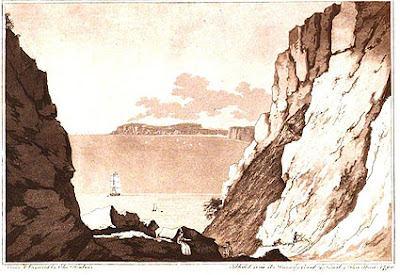 At the eastern part of these Cliffs, about a hundred feet below the summit, is a natural cave fourteen feet deep in the rock ; the width of it being ten feet, and the height six feet. The prospect from this cave, varies but little from that of the Cliff above it, which is given in the plate entitled Path to Hermit's Hole. This describes the path by which alone it is possible to get at the cave; and commands the whole sweep of Sandown Bay, with Shanklin, Horseledge, and Dunnose, in the distance.

The path to Hermit's Hole, is fit only to be explored by those who are in the habit of climbing these tremendous Cliffs; for, besides the narrowness of the path, which in many places is not more than a foot wide, a dreadful precipice of five hundred feet beneath, presents to the eye a fearful prospect, which may so bewilder the imagination of the person who ventures to tread these dangerous passes, that he may miss one necessary step, and then no return of recollection can save him from destruction. Nor is this the only danger that awaits him : the Cliff affords no other footing than small projections of its tender substance, and these will frequently give way under the pressure of the unskilful traveller.

- image and text from A tour to the Isle of Wight: illustrated with eighty views, drawn and engraved in aqua tinta, Volume 2, Charles Tomkins, pub. G Kearsley, 1796

Hermit's Hole was, according to Helge Kökeritz's 1940 The place-names of the Isle of Wight, Issue 6, called Harmwood Hole in 1759 - it mutated to Hermit's Hole on the map in Richard Worsley's 1781 History of the Isle of Wight. It becomes a fixture of Isle of Wight handbooks for over a century, often with embellishments. The account in The Gentleman's Magazine for January 1816 (page 25) tells how the cavern is a refuge for sheep, and the path so narrow that if you meet an oncoming one you have to fall flat and let it run over you. A later account tells a more fanciful version:


Those who utilise this narrow path should remember that sheep often stray down it. The boatmen tell us that this fact bears with it an unexpected danger, for the sheep, frightened by the sound of footsteps, will rash up the path and would readily thrust a man over the edge into the sea. They say that the course which they invariably adopt is to open the legs wide and to allow the sheep to get past in that way.

- The zones of the white chalk of the English coast, Dr Arthur W Rowe, Proceedings of the Geologists' Association, Volume 20, 1908

Folksy stories apart, I found in the British Library 19th Century Newspapers archive two instances of deaths at this location. One was accidental: The Hampshire Advertiser for June 13, 1874 reported on HORRID DEATH OF A FERN GATHERER, when an old man, Isaac 'Matt' Cooper, who collected ferns and gulls' eggs and had made a temporary home in the cave, was found dead at the cliff foot. The other was suicide: the Isle of Wight Observer for March 02, 1878 tells of the death of a servant girl, Louisa Staite, who left her outer clothes on the path to Hermit's Hole and presumably threw herself from the cliff.

Hermit's Hole disappears from the guidebooks at the beginning of the 20th century. A look at Old Maps shows its location to have been about here - it persists on OS maps until 1973 - which agrees with the view in A tour to the Isle of Wight . However, nowadays there's no sign even of the notch in the cliff leading down to it - see the high-res aerial shot by Ashley Middleton - so we can assume it has been long since lost to erosion. It's probably just as well: it sounds a health and safety nightmare, and I have a bit of a weakness for scary paths.

Culver Down is, incidentally, the eastern outcrop of the Isle of Wight's chalk 'backbone' running east-west. Unlike the western outcrop that terminates in The Needles, the headland is not, contrary to appearances from either end, a single point but a pair of concave faces with a frightening overhang.  As shown in A Druid Thurible's Whitecliff post and page 66 of Wight Hazards, these are only visible from sea or air.

Of further related interest to this and the previous post: England and France aren't the only places with such scenery. I'd never made the connection before, but the illustration of the cliff above Hermit's Hole reminded me of Caspar David Friedrich's painting Chalk Cliffs on Rügen. The location is now what is the Jasmund National Park on the Baltic island of Rügen, where the chalk cliffs of the Stubbenkammer promontory, with a capping of mature beechwood, create a scenery with its own take on the familiar-yet-strange - in this case, a bleakness compared to the cosiness of the English and French landscapes with the same geology. These cliffs too are in a constant process of erosion, as evidenced by the collapse of the features called the Wissower Klinken early in 2005.