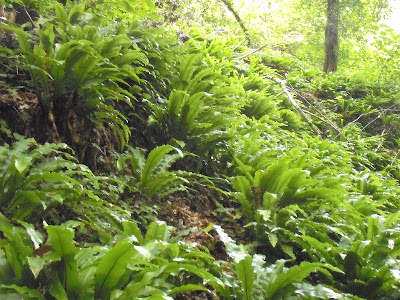 A piece in the local paper about the Canonteign Fern Garden introduced me to a historical episode I'd never heard of: pteridomania (aka fern fever).


As the Wikipedia article describes, this was a mid-Victorian craze for all things fern: collecting them in the field, studying them, planting and nurturing them in house or garden, preserving in decorations, and depicting them in art. The obsession, which peaked between 1840 and 1890, in its short vogue drove a number of British fern species nearly to extinction.

The local and literary interest is that the term "pteridomania" (Pteridophyte + mania) was coined by the Devon author Charles Kingsley in his 1855 book Glaucus: or, The wonders of the shore.


Your daughters, perhaps, have been seized with the prevailing "Pteridomania," and are collecting and buying ferns, with Ward's cases wherein to keep them, (for which you have to pay,) and wrangling over unpronounceable names of species, (which seem to be different in each new Fern-book that they buy,) till the Pteridomania seems to you somewhat of a bore: and yet you cannot deny that they find an enjoyment in it, and are more active, more cheerful, more self-forgetful over it, than they would have been over novels and gossip, crochet and Berlin-wool. At least you will confess that the abomination of " Fancy work," that standing cloak for dreamy idleness, (not to mention the injury which it does to poor starving needlewomen,) has all but vanished from your drawing-room since the " Lady-ferns" and "Venus's hair" appeared; and that you could not help yourself looking now and then at the said "Venus's hair," and agreeing that nature's real beauties were somewhat superior to the ghastly woollen caricatures which they had superseded.

Kingsley's comment about the names varying is amplified in a highly critical review, Ferns and Fern-Literature (pp 358-359, The Reader, 11th April, 1863) 1. A good deal of the amateur-driven "Pteridology" was frankly junk science. Finders would assign names ad hoc, resulting in duplication (some ferns had up to 20 names) and would often assign subspecies names on the basis of morphological features that fell well within random, environmental or plant age variation. The author of the uncredited review - I wonder if it was Kingsley himself? - concluded that


fern nomenclature is fast lapsing into a state of chaos.

Good science or not, vast numbers of people were scouring Devon for ferns: see Google Books - ferns (Devon OR Devonshire). Punch magazine had a dig at the phenomenon on October 3rd 1863:


Then the botanist—above all the fern-hunter—(by the way I should be extremely obliged, if you would suggest to Messrs. Bradbury And Evans, that a presentation copy of their Ferns, Nature-Printed, would be highly appreciated), finds himself, here, in a very embarras de richesses. Every dyke is fringed with the green tongues of the Scolopendrium; in the chinks of the slate-fences nestles the delicate little maiden-hair (Adiantum Capillus Veneris), while the tall fronds of the lordly Osmunda regalis—* * *—[Again we omit several pages of rhapsody—in-fern-al rubbish—borrowed, again, from some manual on the subject. Ed.]

A couple of accounts caught my eye. One, written by Kingsley's daughter and dedicated to her parents for inspiring her with an interest in nature, is quite readable as a pleasant botanical travelogue. See Ferny Combes: A Ramble After Ferns in the Glens and Valleys of Devonshire (Charlotte Chanter, Lovell Reeve, 1856, Internet Archive fernycombesaram00changoog).

The other, serialised in The Monthly Packet, Volume III, 1867 (a magazine of readings for church members), conveys the sheer obsessiveness of Victorian fern fans.  Ferndom, by the pseudonymous "Filix-Fœmina" (i.e. the Lady Fern) goes on interminably about ferns - I can only call it "fernporn" - in what's supposed to be a popular account (see chapter 1, 2, 3, 4, 5, 6).  Chapter 4 is titled The Devonshire Fern.  It must have made ghastly listening to anyone who wasn't a pteridomaniac. It's not that it's jargon (nor am I hostile to botany); it's the inappropriateness for a general publication that otherwise consisted of accessible history and literature, and the author's unflinching belief that the audience will share her deeply specialist enthusiasm.


How often, on being asked by friends looking over my collection of ferns, 'Please show me a plain angulare,' have I been obliged to answer, ' I have none;' and on attempting to give a lucid description, I have found that I signally failed in conveying any definite idea.
...
I shall perhaps explain this part of my subject better by copying some portion of a letter I once received from a great fern authority, on the peculiar merits of a new form of the species angulare, which I had sent to him for inspection. 'It is with great pleasure,' writes my friend, 'that I now have to tell you that you have found something quite unique. Independently of the delicate texture and habit of the specimen you have sent, it is unusually setaceous - but its chief feature is the one predominant spine at the back of every pinnule. It is a most marked and curious feature, and I have tried in vain to find out some appropriate name which would combine all its characteristics. I have, however, written you down a few for your selection or rejection.'

There are a number of good overviews on the Web, such as Peter Boyd's Pteridomania - the Victorian passion for ferns, and two books have been written on the subject: The Victorian fern craze: A history of pteridomania (David Elliston Allen, Hutchinson, 1969, ISBN-10: 0090998707), and The Victorian Fern Craze (Sarah Whittingham, Osprey Publishing, 2010, ISBN-10: 0747807469).

Dr Whittingham's official page for her book says that she's currently writing Fern Fever: The Story of Pteridomania for Frances Lincoln publishers, due out Spring 2012. This looks very likely to be interesting; it was altogether a weird subculture, with its share of bottom feeders such as the "professional fern tout" who hung around selling ferns outside the Bank of England.

1. Not to be confused with the completely uncritical Ferns and Fern-Literature in The Church of England quarterly review, 1857

Update: Fern Fever: The Story of Pteridomania (2012) did indeed go ahead on schedule.