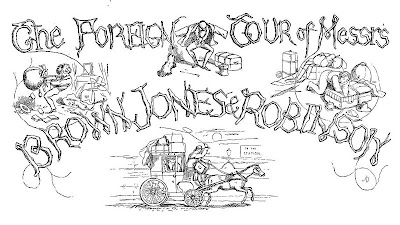 An aside from an aside: if you didn't follow the link from the George Morland article, check out The Foreign Tour of Messrs. Brown, Jones and Robinson: being the history of what they saw, and did, in Belgium, Germany, Switzerland & Italy (Project Gutenberg E-Text No. 29463). This 1854 satire on the European Grand Tour (equally hostile to the Europeans and the trio of English travellers) is one of the many works of the artist Richard "Dickie" Doyle.

Doyle's art ranged through satire and parody (he worked for Punch for seven years) via mainstream illustration (he illustrated Dickens, Thomas Hughes, and Ruskin works) to fantastic and grotesque fairy art. He sounds a rather strange guy: despite his (untrained) talent, he didn't always produce work up to standard, and often gave deeply lame excuses for not meeting deadlines.

Doyle had a facile pencil when once fairly at work, but he was singularly deficient as to the value of time, which appears strange in one who produced so many elaborate drawings; but little reliance could be placed upon him even when working for periodical publications. On one occasion when illustrating a story by Thackeray, the number had to be issued short of certain pictures that had been arranged for. Thackeray was a good deal annoyed and asked Doyle if he could give any reason why he had not done the drawings. He replied in his cool, deliberate manner: "Eh—er— the fact is, I had not got any pencils."
- The brothers Dalziel: a record of fifty years' work in conjunction with many of the most distinguished artists of the period, 1840-1890, George Dalziel, Edward Dalziel, Methuen and Co., 1901

The Victorian Web has a good compendium of essays and samples of his work, under the heading The Illustrations of Richard Doyle, 1824-83. Most of the books he illustrated are also on the Internet Archive: I particularly like Manners and customs of ye Englyshe (1849); A journal kept by Richard Doyle in the year 1840 (1885); and the abovementioned The foreign tour of Messrs. Brown, Jones, and Robinson (1854).