I'm not terribly into boats, but Friday had a break from the recent "gray afternoon was wearing on to its chill close" weather; and to shake out the cobwebs, I pottered down to Topsham Quay to look at the Vigilant, a 1904 Thames barge that recently arrived here for renovation. 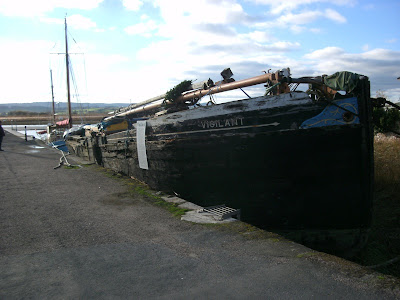 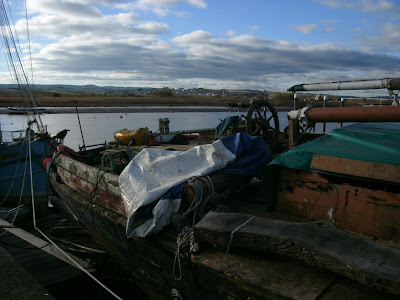 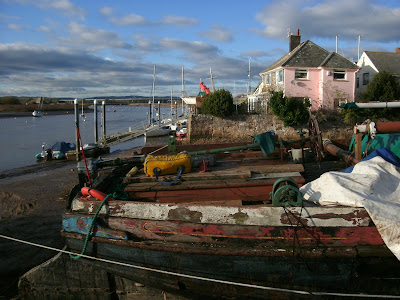 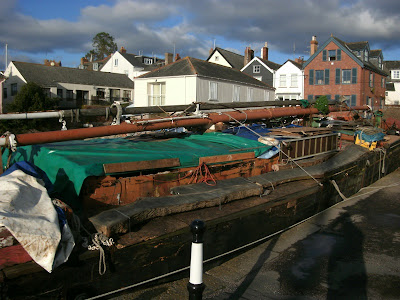 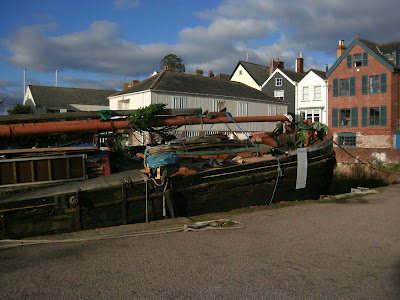 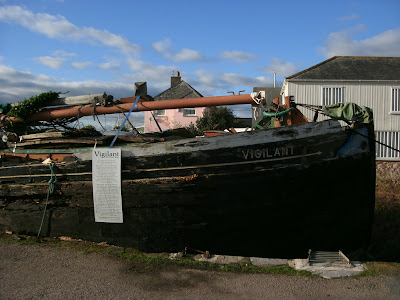 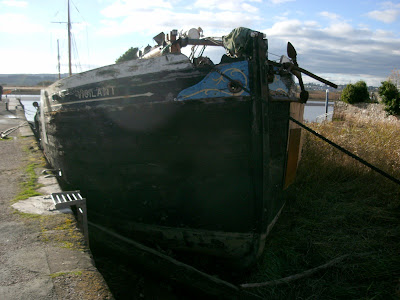 The owners have put an explanatory plaque on the side:

The Vigilant was built in Ipswich and is a class spritsail Thames Barge rigged with a bowsprit.

She is listed in the Historic Ships Register. Although there were hundreds of these working sail boats on the Thames, only about thirty are still in existence.

Vigilant was built as a working barge for the Horlock Family, who were the Eddie Stobart of the 1900s. These barges worked around the coast transporting massive loads, when Topsham was a working port, they would have been frequent visitors to the Quay.

Vigilant weighs 74 tonnes, could carry 120 tonnes, and was used to ferry grain. When fully loaded up to their marks, these barges would be virtually submerged. They were powered by massive ochre-coloured sails, engines only being fitted in the 1930s. The main sail alone took three men to hoist.

As well as working, these barges were built with racing in mind. The barge racing matches still continue to this day, with racing matches off the Thames Estuary during summer. In 1928, Vigilant was a class race winner. She continued to be sailed until the 1930s, when she was converted into a houseboat.

Vigilant has travelled from the River Colne in Essex down the Channel to Topsham, and will be sympathetically restored to enable her to once again take to the seas under her red ochre sails as a racing barge.

If you would like to be a friend of Vigilant, please email info@vigilantbarge.com

The Society for Sailing Barge Research site has a few more specifics on its barges listing:


Vigilant
Of Harwich
Staysail Class
Official No. 116176, 73 ton. Built of wood at Ipswich in 1904 by Orvis & Fuller. Owned by Alfred Horlock and converted to a yacht in 1932. Sold back into trade and converted to motor barge by Whiting Bros. Passed to L.R.T.C. Owned by Dawes, Thomas and Martin. as private barge yacht until sold to Ms. Lynn Johnson & Graham Head late 1997 and now based at Woodbridge, Suffolk. moved to St Osyth 2004.