Joe and the Jolly Gist

It's an unlikely jump from Victorian inspirational book to Cumbrian dialect stories, but J Milner Fothergill's 1888 The Will Power; Its Range in Action does exactly that. It's a bit of a curiosity, a collection of examples of will power in action, from history and literature, and described by its physician author as "not a metaphysical enquiry, but a practical book, which it is hoped will be found useful by many, especially those entering into the battle of life".

One of its anecdotes is this:


The question of will in relation to the progress of disease is constantly met with in medical practice. On the other hand, given a woman of ardent temperament with a sufficient motive to live; and nothing but mortal disease can kill her. The same may be said of the hardy old folks of the north. Joe in "Jo and the Jolly Gist" (geologist) said of his father, "Fadder deed! He's none o' t' deing mak'. We's hev to worry fadder when his time's come: he'll niver dee of his self so lang as there's wark to hound yan on till."
- p170, The Will Power: its Range in Action (Fothergill, J. Milner, New York: Funk & Wagnalls, 1888, Internet Archive willpoweritsrang00foth).

It might seem odd that the physician John Milner Fothergill should pick what must have been, even then, an obscure Cumberland story as an example in his miscellany of the will power. The connection, however, is that he was himself from that region, born in Morland (then in the adjacent county Westmorland). A departure from a series of strictly factual medical titles (see the Internet Archive), The Will Power; Its Range in Action was his last book; he died in 1888. As he was a long-time sufferer from gout and diabetes, it's not hard to imagine that the role of will power in coping with disease was a topic close to home for him.

Fothergill has slightly misremembered his source, as this description comes not from "Jo and the Jolly Gist", but from a sequel, T' reets on't, which appears in Alexander Craig Gibson's 1869 The Folk-Speech of Cumberland:

The original story, Joe and the Geologist, was anonymously-written - though most likely by Alexander Craig Gibson himself - and published as Joe and the Geologist: a short story in the Cumberland dialect (Carlisle: George Coward, 1866, Google Books HlVKAAAAYAAJ). It concerns a wily character (or lazy passive-aggressive timewaster, depending on where your sympathies lie) who tricks a geologist to avoid carrying stones the latter has collected. Folklore attaches the story to the real geologist Adam Sedgwick, who did fieldwork in Cumberland in the 1820s, and the story appears in The Life and Letters of the Reverend Adam Sedgwick (pp252 ff).

It seems to have been a popular story of its time, and the Lancashire-born novelist Amelia Barr recycled it in her The Squire of Sandal-Side: A Pastoral Romance (c. 1887, Internet Archive thesquireofsanda16258gut), which features a family who know "Joe Bulteel" and Professor Sedgwick. At a Christmas Eve gathering, they recount the story of "Joe and the jolly-jist" (without much detail - it's assumed the reader knows it) along with a more detailed sequel in which Joe and Sedgwick are reconciled. 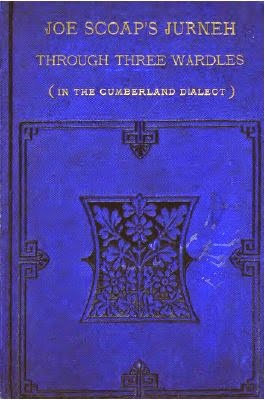 Another Joe from Cumberland, of rather similar canniness, appears in works of Jim Sargisson (real name Peter Robinson), who wrote sketches in Cumberland dialect in the 1800s.


A dialect writer who was born at Lorton, and is also buried there, was Peter Robinson (Jim Sargisson), author of the ever popular Joe Scoap’s Jurneh through Three Wardles. These sketches mostly appeared as a series of letters in the Whitehaven Herald, and were later published in book-form at Whitehaven in 1881. It is by far the longest work in Cumbrian dialect prose, but not a page too long; and to travel with the redoubtable Joe "frae Hobcarton Boddom ta Ower t' Rays Farm i' Western Canada, on through America, an' ta t' gowld diggings o' Australia whor they fund t’ greit nugget ‘at kick t’ beam at a hundert an’ thurty pund troy weight” is an unforgettable experience. He is the incarnation of good spirits and good health, and like Mark Tapley he keeps a merry heart
...
Robinson, Peter (Jim Sargisson)—1816?-1890.
A Lafter O' Farleys in T' Dialects O' Lakeland, 1760-1945 (Lakeland Dialect Society, 1950)

Joe Scoap’s Jurneh through Three Wardles is available as a Google scan in the Bodleian Library's digital holdings, most conveniently via the Europeana portal:
It's surprisingly readable. Many 19th century dialect stories laboriously transcribe every nuance of the pronunciation, with detailed diacritics far more extensive than those in the Gibson sample; this is fine for an academic record, but not for a readable text. Sargisson avoids that. Others add unnecessary reading complications with the use of "eye dialect" - phonetically functionless non-standard spellings purely to telegraph the speaker's social class (e.g. "wot" for "what"). Sargisson does none of that either, stating in the preface that "the orthography of the Queen's English is always preserved where the pronunciation will admit of it".

It does, by the way, feature a reference to "Joe an 't Jollyjist", when the story turns up at a reading held at an 'Improvement Society', and Joe Scoap gets highly indignant at any suggestion that he himself might be the protagonist: