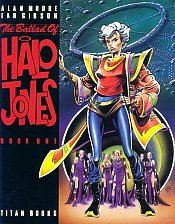 I seldom see graphic novels passing through Joel Segal Books in Topsham, but a pleasant exception arrived in stock today: the three-volume Titan Books set of The Ballad of Halo Jones. Drawn by Ian Gibson, this is another Alan Moore title (see the previous entry) and Moore's earliest major work, when he wrote for the British science fiction comic 2000 AD in the mid-1980s.
Moore writes in the preface that he wanted something out of the "guns, guys and gore" style of the comic, a female character who was neither wilting and forever losing her clothes nor a "tough bitch with a disintegrator and extra Y-chromosome". Halo, a 50th century everywoman, proved to be one of 2000 AD's classic characters, appealing to both with male and female readers, and her story went on to three 10-story segments before foundering over Moore's dissatisfaction over creator's rights issues.
Book 1 introduces Halo's mundane life, where she dreams of escaping from the Hoop, a dystopian floating urban complex where even a shopping trip is a perilous affair. Book 2 follows her when she leaves in the hope of finding adventure off-world via a job as a hostess aboard a luxury star liner. Book 3 takes a darker tone as she finds enlistment in the military the only available career choice. The story is tragi-comic, full of strong female characters, and Moore and Gibson's imagined world is packed with intricate social detail (the creators are not afraid to leave slang and other trivia unexplained).
In this early work, Moore shows the talent for clever allusion that manifested in his later works such as From Hell and League of Extraordinary Gentlemen: for instance, Book 3 shows unmistakable references to several other classic anti-war SF works: David Masson's short story Traveller's Rest, Joe Haldeman's The Forever War, and Harry Harrison's Bill, the Galactic Hero. All are worth finding. - Ray
at 15:28