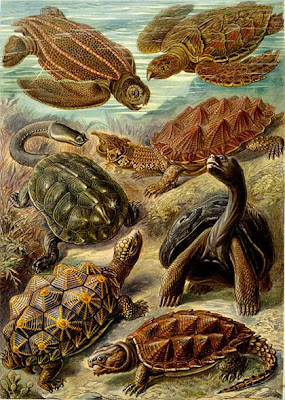 One of the articles at Cabinet magazine caught my interest, Ernst Haeckel and the Microbial Baroque; the text description doesn't do justice to the beautiful images in this zoologist and philosopher's 1904 book of biological artwork, Kunstformen der Natur (Artforms of Nature). Unfortunately, behind this elegant art and some genuine scientific insights, there's a rather darker story.

Haeckel was responsible for some classic images of embryological development that supported the now-discredited theory that "ontogeny recapitulates phylogeny" (that is, the belief that embryos go through stages where they look like their evolutionary ancestors). But around a decade ago, in Anatomy and Embryology, 196(2):91–106, 1997 the embryologist Michael Richardson and others reported the results of rephotographing the embryos in Haeckel's classic illustration, and concluded that he had grossly exaggerated the similarity. This only freshened a fact long known: Haeckel was caught out even in his own lifetime by scientists such as L Rutimeyer and Wilhelm His, who spotted that he had redrawn other scientists' sketches of dog and human embryos to make them look more similar.

This didn't much affect Haeckel's career, as he went on the offensive against his critics, admitting to only minor falsifications caused by the need of the draughtsman (himself) to interpolate. Nevertheless, his dodgy embryology was so vivid a meme that his drawings have become a fixture of biology textbooks right up the the present. Only recently, as this note by Ken Miller and Joe Levine shows - Haeckel and his embryos - have some textbook authors begun amending their illustrations to better reflect reality. It remains a problem, however, that the discrediting of Haeckel has been latched onto by creationists, who falsely portray his long-sidetracked ideas as central to evolutionary theory (see PZ Myers on creationism and the Haeckel saga).

Haeckel had a number of other strange ideas, many focusing on German nationalism. Pauli Juhani Ojalan's evolution site has a Haeckel Page; much of it is in Finnish, but the English-annotated illustrations give the flavour of Haeckel's flakery such as his Faces series identifying human nationalities with different species of monkey and ape (it recalls Le Brun's System of Physiognomy) and his Genealogical tree of the Indo-Germanic Languages which presents Germanic languages as the main line of descdent of the Indo-European tree. These ideas, along with his interests in racial superiority, eugenics and social Darwinism, he entwined with a pantheistic philosophy, Monism. All this helped provide many of the supposed scientific underpinnings for Nazism: a very nasty footnote to Kunstformen der Natur.

There are biographies at ScienceWorld and UCMP Berkeley, and Wikimedia Commons has public domain images of all the plates from Kunstformen de Nature.
-Ray
at 16:07