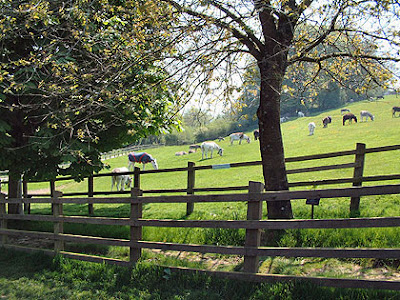 Today was one of those days when you can believe summer is finally happening. Clare and I went to the Donkey Sanctuary in East Devon. I guess it's best summarised as a very gentle experience: donkeys are pleasant enough, but they don't seem to relate very much (and you aren't allowed to feed them). However, from the Sanctuary we took the beautiful 500-foot descent down the wooded Weston Combe - at the moment the bluebells and wild garlic are in flower - to the beach at Weston Mouth. We didn't know it's a naturist beach, but it's all very discreet (it's so inaccessible that anyone on the beach is either sunbathing, doing serious walking, or geologising - so no curious spectators). Offshore, the last bits of the MSC Napoli are still there. Rather than climb back up, we walked along the beach to Sidmouth - a couple of miles on loose shingle, almost as strenuous as the climb, especially on a hot day without the forecasted breeze - and had tea there.

I never tire of Sidmouth, for its pleasant isolation and very genteel Regency style. It also has a solid literary presence: Jane Austen's family visited it in 1801; Elizabeth Barrett Browning lived there for a time; it was the home of novelist Stephen Reynolds, author of A Poor Man's House (based on his life among Sidmouth fisher-folk) and the great love in the life of Philippa Powys; and RF Delderfield lived there at the end of his life. It's the setting of HG Wells' short story The Sea-Raiders (featuring killer squid) and of the title story of Jane Gardam's The Sidmouth Letters (described here at BooksPlease); and it appears in fictionalised form in various works: as Beatrix Potter's "Stymouth", Thomas Hardy's "Idmouth", Thackeray's "Baymouth", and Howard Pyle's "Spudmouth".

It featured, as Westcombe-on-Sea, in the Fry and Laurie Jeeves and Wooster series. Stephen Fry, in his Telegraph column at the time, wrote well of it in the article "Dear Sid", reprinted in his book Paperweight. He mentions its Edwardian hotels, the long esplanade with "a greater concentration of tea-rooms, bun-shops and knick-knackariums than one would have imagined possible outside the novels of EF Benson", and where the only coin-operated machine he saw was a telescope. He also confirmed its reputation, among other quiet resorts, as "God's waiting room", quoting an average of four deaths a week in its hotels, the corpses being quietly removed at two in the morning to avoid upsetting other guests. (This sounds more furtive than it actually is; as the book Front Office points out, for hotels everywhere this is standard procedure that makes all-round sense). Fry commented also on the particularly marvellous atmosphere when it was decked out as the 1930s Westcombe-on-Sea, in relation to Britain's sentimentality for a chocolate-box past. A diet of chocolate would be emetic, he says, but it's nice for a occasional treat.

I found the list of Sidmouth's pseudonyms at A Place in Literature, a posting at A Curious State of Affairs, the weblog of Sidmouth-based author Jan Marshall. By coincidence, she and her partner were also out today, but taking the clifftop route: see Walking the coastal path for very nice photos (see also her Photo-blog).