Bessemer Saloon and other experimental ships 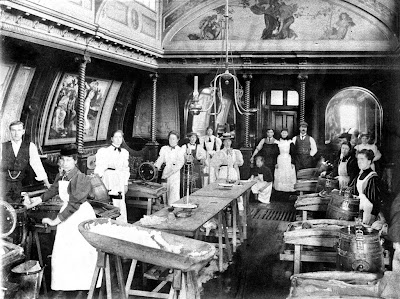 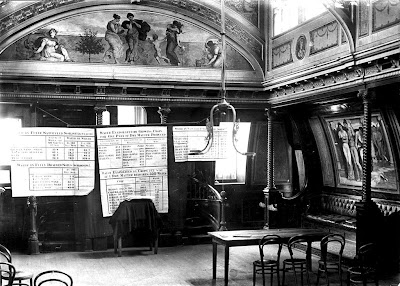 Update, October 21 2008: Dave Greig extremely kindly sent us these excellent 1897 photos (click to enlarge) of the Bessemer Saloon in its retirement as a lecture room at the Swanley Horticultural College. Left: Dairy Class. Right: the other end of the Saloon. The images came from a Victorian photo album Dave found in an antique bookshop in Edinburgh. Photos in memory of Ethel and Grace, the otherwise unidentified album creators.

Main article: This is an update to the previous Laurence Oliphant ... Victorian with a difference (originally posted in Autumn 2007 at my personal blog, but it seems sufficiently interesting and book-related to move here).

The first chapter of William Gibson & Bruce Sterling's steampunk novel The Difference Engine mentions Oliphant crossing the Channel in the "swinging-saloon ship Bessemer", which has its main cabin automatically held level by a "backfeed engine" to guard against sea-sickness. Like many of the odder fixtures in TDE, the Bessemer Saloon Steam-Ship actually existed (see this Science and Society Picture Library image, Bessemer suspended saloon steamer, 1875).

Sir Henry Bessemer is best known for his innovations in steelmaking, but was a wide-ranging inventor. This invention, however, wasn't one of his successes. The real-world version of the ship, a four-paddle steamer designed by the naval architect EJ Reed and built by Earle's of Hull, didn't have automatic feedback but a man with two levers controlling hydraulics watching a spirit level. Bessemer set up a company to offer a cross-Channel passenger service - except that the ship didn't work properly. It was monstrously unstable and at slow speeds didn't answer to the helm; it made only two trips, neither with the swinging saloon working, and on its first outing it crashed into and seriously damaged the pier at Calais. (Short Works of Percy Hethrington Fitzgerald has an account of the incident). Naturally this rapidly lost the confidence of investors. You can read about Bessemer's side of the story in Chapter XX of Sir Henry Bessemer, F.R.S, An Autobiography.

Bessemer's company was liquidated in 1876, and the ship sat in dock at Dover until it was sold for scrap in 1879. The Greater London Industrial Archaeology Society bulletin for August 2004 (here) mentions the Saloon's history. According to the Manchester Guardian of 8/10/34, it

"was removed to a private house at Swanley, Kent. The house is now a women's Horticultural College and the saloon is used as a lecture hall. The old leather seats still remain in place round the walls, and there are some beautiful carved panels with the monogram B.S.S. Co. and twisted mahogany pillars supporting the roof".


By 2006 (here) they had a lead to Hextable Agricultural College.

A bit of cross-referencing finds they're the same place: the Hextable Horticultural College aka Swanley Horticultural College. The Record of Technical and Secondary Education, v.5 (1896), says that Hextable House, the central mansion of the college, was formerly the residence of Sir EJ Reed (the MD of Earle's) and that he installed the "curious and interesting" saloon there - which explains how it came to be on the premises of a horticultural college. Reed used it as a billiard room, according to the 1957 Boat Trains and Channel Packets: The English Short Sea Routes by Rixon Bucknall.

"its crudely painted classical frescoes have caused a good deal of amusement to generations of new students. It is never called anything else but 'the saloon'. The staterooms are used as study bedrooms; the smoking room is occupied as an office, and is entered by means of the original companion way".


The college was bombed in World War 2 - see Article ID: A7035013, WW2 People's War, BBC - and the house, too badly damaged to repair, was demolished afterward. The site is now occupied by Hextable Heritage Centre, based in the old college laboratory, which sits alone in the restored gardens.

As to the final fate of the Saloon, I've been intrigued for a long time by the possibility that it might still exist, ever since I read the late Professor JE Gordon's The New Science of Strong Materials, which said (in 1968) that the saloon "is still in existence ... as a conservatory, in a garden somewhere near Dover". An article in Metallurgia: The British Journal of Metals, v.49-50 1954, also sounded hopeful: "When the College was closed, the saloon-hall was offered for sale, but its present whereabouts are unknown to the author".

Disappointingly, it's gone as a structure. Bernard Dumpleton's 2002 The Story Of The Paddle Steamer states categorically that it was destroyed by a direct hit, and a dig into the National Archives finds a history of the Earle shipbuilding company (here) confirming "This swinging saloon ended its days as Swanley college's lecture theatre before being bombed during the second world war". Just to be sure, I contacted the Swanley Town Council, and the archive curator very kindly confirmed the details: "the lecture hall was destroyed, but pieces of the saloon were 'rescued' by local residents; there is a fragment of the panelling in the archive itself".

That leaves one loose end: JE Gordon's statement about the conservatory in a garden near Dover. Was he referring to the Saloon in situ at Hextable, a London green-belt village not especially "near Dover", and simply repeating a garbled out-of-date description; or was he referring to a rescued fragment? I don't know.

An interesting historical aside: both Bessemer's autobiography and Times correspondence at the time mention rivalry between the Bessemer and proponents of another experimental cross-Channel ship design, the Dicey catamaran. This design was as weird in its own way; propelled by centre-mounted paddles, it had to be double-ended because it was impossible to turn round in Calais harbour. A ship of this design, the PS Castalia, ran for nearly a decade, but was loss-making because of its slowness, and it ended up moored in the Thames as a hospital ship. A successor, the PS Calais-Douvres, was about as successful. If you're interested in this kind of thing, the Dutch maritime encyclopedia Vaartips Nederland features these and other experimental ships - see here - such as the Winans Cigar Ships, the Novgorod class Russian circular river battleships (designed to combine heavy armament with shallow draft); the Flettner Rotor-Ship; and the Connector, an articulated steamship. It's difficult to find much about the latter online, but Google Books searches on articulated connector ship and "jointed ship company" lead to plenty of print references. One full view gives a reasonably detailed description: see Jointed Ships in Journal of the Society of Arts, September 3rd 1858.

Google is always producing new facilities. Just trying Google Scholar finds a couple of full-text 20th century patents for articulated ships: Archer interconnected ocean barges and Articulated ship and coupling means therefor having means to establish structural integrity. These have to quote prior art, and mention the Connector as having been patented by Thomas MacSweeny in 1853, and having run as a North Sea collier for nine years with engineering success. The idea is not that bizarre; a ship organised into small sub-units like a train could disconnect and act as its own lighters for unloading. We're not told why it ultimately didn't catch on, or if it ever had to cope with severe seas.

A further piece of prior art quoted is that of Sir Samuel Bentham, an interesting character; an inventor and naval constructor, he was the brother of the better-known Jeremy Bentham, who still presides at UCL (see The 'Auto-Icon'of Jeremy Bentham at University College, London - PDF). Part of Samuel Bentham's career - see the UCL Bentham Project - involved working for Prince Potemkin and Catherine the Great. For the latter, he built the Imperial Vermicular, a shallow-draft segmented barge designed to navigate twisty Russian rivers. This must have been a fairly strange sight - a six-section barge, 252 feet long, driven by 120 oars. But it worked, and was used for Catherine's famous inspection tour to the Crimea in 1787.

Incidentally, Bessemer's swinging saloon wasn't strictly a new idea. I've found a few snippets referring to early experiments. Mr. Bessemer's Saloon Steamer for the Channel Passage (Nature 7, 41-42 (21 November 1872) leads with "The prevention of sea-sickness by means of a swinging cabin has nothing novel about it", and in The First Oceanic A Pioneer In Ship Design, Saloon Amidships, The Times, Wednesday, May 10, 1933; pg. 11, I find:


With the new White Star steamships an attempt was made to overcome motion due to the sea by the employment of oscillating state-rooms and berths, but this idea, like a greater experiment made afterward in the Bessemer, was abandoned, as it proved ineffectual

This refers to the White Star steamships of the late 1860s after Thomas Ismay (father of the Titanic Ismay), became manager owner.

Update, 24th March, 2015:
See Rocked in the cradle of the deep for more on the topic of oscillating berths in late 19th century steamships.
- Ray