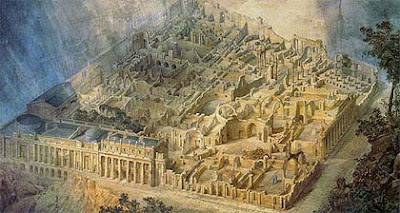 Julie Heyward's weblog Unreal Nature had a recent post, Into That State Of Feeling, that quoted the scene-setting description of Rome from Nathaniel Hawthorne's extremely strange semi-fantasy The Marble Faun (Gutenberg Etext No: 2181 / 2182).

The Marble Faun intro focuses on Rome's temporal complexity, a present on top of Christian, Roman and Etruscan ruins, which reminded me of The Professor's Dream, a cityscape of great monuments from various eras, drawn by the architect and archaeologist Charles Robert Cockerell, and Thomas Cole's The Architect's Dream.  I'd known about these works for a while, but yesterday I was struck by the similarity of a painting in Images: Artists' views of places in care of the National Trust, Oliver Garnett, 1995, ISBN 0707802105), Carl Laubin's 1993 A Capriccio of National Trust Buildings, a composite landscape, with juxtaposed English stately homes and castles of all periods. I can't find this one online, but the Carl Laubin official website has many others (click on Gallery / Capricci / Open / Full screen, to get into the Flash slideshow), many of them amazingly evocative.

The similarity to Cockerell's work isn't accidental, some of Laubin's works being intentional homage. For instance, The Square Mile (inspired by The Professor's Dream) portrays the whole history of the City of London, from the remains of Londinium to Canary Wharf; and Another Professor's Dream puts Cockerell's architectural works into his unexecuted rotundas for the Cambridge University Library (see A classical fantasia: Carl Laubin has resurrected all C.R. Cockerell's major works in one ambitious, extraordinary painting, David Watkin, Apollo, March 2006). My favourite of the set, Grottesca, looks out from a vast and misty grotto entrance populated by (and partly made from) 77 National Trust garden buildings.

The roots of Laubin's work go deep, with immediate references to Cockerell's A Tribute to Sir Christopher Wren and to Joseph Gandy's 1818 Public and Private Buildings Executed by Sir John Soane. (Gandy's bizarre Soane's Bank of England as a ruin, 1830 is the header image for this post - see Where London Stood for detail, a ground plan for comparison, and Let there be light for more about Gandy).

The capriccio form - fantasy compositions based on architecture - dates even further back, exponents including Marco Ricci (see A Capriccio of Roman ruins, 1720s) and Giovanni Paolo Pannini (see his 1758 Picture gallery with views of ancient Rome).

Other artists of related interest: William Marlow, whose Capriccio: St Paul's and a Venetian Canal (circa 1795) juxtaposes a London skyline with a Venice foreground; Emily Allchurch, some of whose urban images definitely come under the capriccio category, particularly the Settings series that reconstruct Old Masters paintings using architectural detail from contemporary London (see The Tower of London (after Breugel)) and the Urban Chiaroscuro series that similarly reimagine Piranesi's Carceri d'invenzione series (themselves capricci-style); and Agostino Arrivabene, whose landscapes include capricci of the ruins of strange monumental architecture - it's unclear if it's alien or far-future (see Capriccio con ruderi di città ideale - Capriccio with ruins of an ideal city).

Addendum: in the comments, thatsticksandstonesshouldfall (to whose blog I've linked) recommended also "Monsù Desiderio", the pseudonym for the collaborative works of François de Nomé and Didier Barra in the early 1600s. Apart from more traditional capricci, he/they "also painted buildings in the actual moment of their destruction, which are wonderfully mind-blowing". See the post there expanding on his/their work, On the shore at Utica.

Addendum 2: this is not architectural, but I was just looking at Dramatis Personae of the History and Exploration of the Greater Himalaya, Karakoram, Pamirs, Hindu-Kush, Tibet, Afghanistan, High Tartary and Surrounding Territories, up to 1921, which a scan of pleasant print depicting the relative heights of various mountains in a style resembling those architectural composites. See A Comparative View of the Principal Mountains in the World with their Altitudes (from the Thos. Starling "Family Cabinet Atlas" London, Bull & Co., 1820/1830?). Actually, on closer observation it's a tiny bit architectural; you can just see the Pyramids (Africa no. 1) at bottom left.