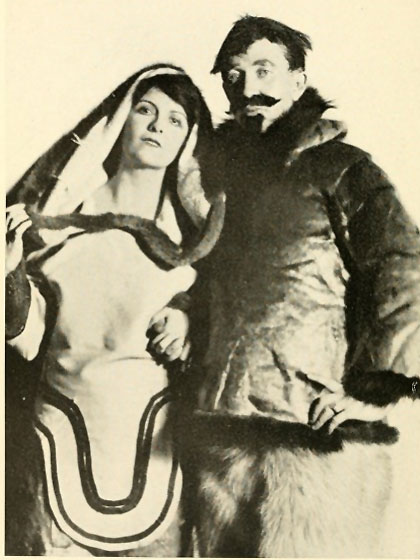 Further to South Sea shenanigans: I'm sorry to see Traprock/Chappell's 1923 Sarah of the Sahara isn't findable online, but the 1922 sequel to Cruise of the Kawa is: My northern exposure: the Kawa at the Pole (George Shepard Chappell as Walter E Traprock, G.P. Putnam's Sons, 1922, Internet Archive mynorthernexposu00trap). As can be seen with the photo of Walter E Traprock and "Snak" (click to enlarge) it continues the joke of the completely non-ethnic women the explorers keep meeting.

I found a little more about the Traprock series: while Chappell did writing, the concept was a collaborative one instigated by the publisher and promoter George P Putnam (Amelia Earhart's husband, incidentally) who was well in on the joke, as were an astonishing lineup from the NY intellectual/arts scene. In his autobiography Wide Margins Putnam tells how:

My northern exposure takes the exploration ship Kawa to the north pole, with the help of a radical refit including a magnetic bowsprit, a design for complete flexibiity so that the ship slides over the ice like a seal or "a greased hot water bottle", and a heated waterline to melt the ice.

I decided on the straightest, just as I had decided, in Cambridge, to take the Kawa to the North Pole instead of the South because it was nearer. Obviously I must reach the polar ice-pack before making my beeline as my ship was adapted for but two elements, ice and water. Travel over bare ground was not contemplated. Wheels had never entered my head. How nearly this fact cost us our lives makes a thrilling story but one which comes later.


Once at the pole they run into wonders such as the "polar ditch", marking the edges of the world stopper that releases pressure from the grinding of its axis; the flocks of pemmican and reindeer feeding on the Christmas trees; and Eskimos 1 (who turn out to be blond and fair-skinned - their appearance to the contrary being down the protective layer of animal oil they wash off every Spring). Tensions grow, however, during the Arctic winter when the only diversions are an all-night card game (six months long) and the offer of the chief Eskimo's wives 1. Traprock finds himself in love with Ikik, Snak, Yalok, Lapatok and Klipitok, but is thwarted by the attentions of Mrs Sausalito, the ship's seamstress.

I didn't find the book quite as funny as Cruise of the Kawa. In part, some aspects of Arctic life are hard to parody: the food, for instance.2 Or maybe, giving the harrowing nature of polar exploration, some areas were just too dark to parody at the time.3 It was, after all, only a decade after the death of the Scott party returning from the South Pole. I was brought up on the Captain Scott exhibition, and still have the Ladybird Captain Scott: An Adventure from History I won as a school prize in 1964, and it unsurprisingly takes the traditional heroic line. Scott has since been the subject of a deal of revisionist attention, particularly Roland Huntford's Scott and Amundsen.

While there has lately been counter-revision too (arguing that Scott was unfairly neglected in favour of, particularly, Shackleton) I think it's still the case that the focus on Scott has tended to obscure a number of comparably harrowing stories of polar exploration. I recently ran into Hell with a Capital H, based on the diaries of Dr Murray Levick. As reviewed in the Telegraph - Limping up the glacier - it tells of the Scott expedition's Northern Party, six men who survived for six months in a snow hole in appalling conditions, psychologically as well as physically (privacy and social order was achieved through an imaginary barrier).

Some of these accounts are online. Man's best friend, at studentBMJ, tells of Douglas Mawson and Xavier Mertz, now generally viewed to have been poisoned by Vitamin A from eating husky liver after loss of their supplies. The full story comes Mawson's book Home of the Blizzard, which comes in various editions: from the 1914 version The Home of the Blizzard to "Mawson D, Fiennes R. Home of the blizzard, a true story of Antarctic survival. Edinburgh: Birlinn, 2000". A 1997 edition, This accursed land by Lennard Bickel, appears to be somewhat sensationalised: a section in it where a crazed Mertz bites off his own finger to show how dead 'ard he is doesn't appear in the other accounts.

A far more favourable outcome is that described in South! - the story of Shackleton's 1914-1917 expedition, where the entire stranded expedition was saved following the loss of its ship. South! is also online with its photos at Cool Antarctica. Another online book of interest is Alone, Admiral Richard Byrd's autobiographical account of his isolated stay in a weather station in Antarctica. Seriously ill from carbon monoxide poisoning from stove fumes, he managed to survive while hiding his condition from his home base to prevent anyone endangering themselves with a rescue attempt.

It's of related interest that the psychological themes of Antarctic exploration have inspired many plays, such as David Young's Antarctica, Marjorie Duffield's Ice Island: the wait for Shackleton. See Antarctic Theatre for more; the listing is at The Antarctic Circle, an interesting "non-commercial forum and resource on historical, literary, bibliographical, artistic and cultural aspects of Antarctica and the South Polar regions".

See Snopes.com:Do Eskimo men lend their wives to strangers?. This covers, briefly, the issue of complex customs that do involve marital exchange where a strong degree of kinship exists, but which appear to have misrepresented/abused by non-native visitors. Robert Peary, Matthew Henson, and Robert J Flaherty all fathered children by Inuit women during the Arctic travels - but not, it appears, under the previously-mentioned circumstances. Henson was single, his partner Akatingwah formally betrothed (the nearest Western equivalent), and he continues to be held in high regard by his descendants - see The Eskimo offspring of Matthew Henson, Ebony, Jan. 1987). With Peary, it seems like plain adultery, despite the claim by some of his American descendants that he was forced into this by local custom (see Suffering for Science - but having two children by the same woman, Ahlikahsingwah, stretches this theory somewhat). With Flaherty, it was the common situation of director having an affair with leading lady (while filming Nanook of the North).

The Snopes piece also mentions the problem of the word "Eskimo". Moderately recently the standard claim has been that it's pejorative, derived from a Cree word meaning "eaters of raw meat". Replacing it with "Inuit" isn't ideal, because not all "Eskimos" are Inuit; there are also Yupik and Aleut. But nowadays that etymology has been debunked: it appears to mean either "snowshoe netters" or "people who speak a different language". Nevertheless, the folk etymology that it's pejorative persists. What to do?

2. Arctic and sub-Arctic food is generally monstrous to the average temperate-climate European taste. However, it's easy to forget that given the heroic calorie requirements to maintain body heat and exertion, fatty foods such as pemmican become strangely palatable. Furthermore, lack of plant life forces use of animal/fish products - narwhal skin, for instance, for its vitamin C - and lack of cooking fuel forces ways of using such products in various cured/dried/rotted forms (at Unreal Nature we were just talking about hákarl.

3. Not any more: see the Carling Polar Night Out ad.

PS: As a slight antidote to the surfeit of testosterone in this topic, check out: