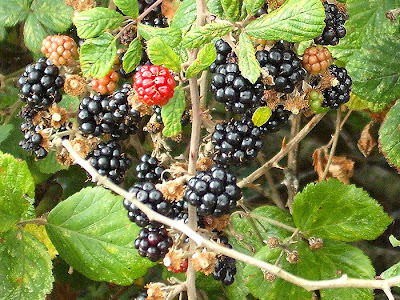 We had a pleasant and enlightening walk last weekend round Highfield Farm, Topsham. The trail by the River Clyst - see map - doesn't seem much visited, but it's one of the few places around Topsham where you can completely forget the closeness of the town. We ate lots of blackberries, which reminded me of Seamus Heaney's Blackberry Picking and Owen Sheers' poem Hedge School. The title derives from hedge schools, a system of unofficial schooling in rural Ireland devised to circumvent the prohibition of Catholic education, but the poem's thrust is that the hedge itself teaches the narrator something about his own dark side, as in the final stanza where he crushes blackberries instead of eating them.

Or, as I did just once, strolling towards the low house
growing at the lane's end,
not to eat them at all,
but slowly close my palm into a fist instead
dissolving their mouthfeel over my skin
and emerging from the hedge and tree tunnel
my knuckles scratched and my hand blue-black red,
as bloodied as a butcher's or a farmer's at lambing
or that of a boy who has discovered for the very first time
just how dark he runs inside.