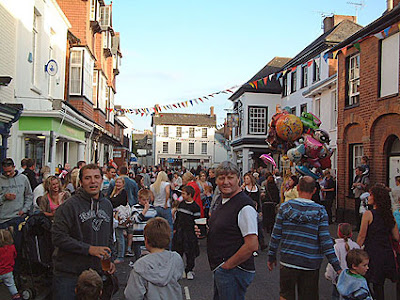 It happened here. The arched brick building (right) used to be the old market, on whose construction site The Rights of Man was burned and Tom Paine denounced in effigy in 1793. The organisers' junket was held afterward in the Salutation Inn's Assembly Room, the upstairs room with the multi-paned window (also right). Image: Topsham carnival day, 2009.

A fascinating and somewhat chilling find via Google Books:

An Account of the Procession made by the loyal Inhabitants of the Parish of Topsham, in Devon., on Tuesday, January 22, 1793, to express their Attachment to our Gracious Sovereign King George the Third, and the present happy Constitution of this Realm - pp. 98-101, The Republican, Volume 9, Richard Carlile, 1824.

The context was national fear of revolution. The American Revolutionary War had taken place a decade previously, the French Revolution was at its height, and there was significant sympathy to such causes. The radical Thomas Paine had been a leading thinker behind these revolutions, and thus was demonized by his opponents in England, with many burnings and hangings in effigy in 1792-1793. One such took place at Topsham.

According the account in The Republican (which is copied from The Weekly Entertainer, a regional magazine published in Sherborne, 1783-182? 1) the procession was announced at 8.30am, and gathered an hour later on the lawn of The Retreat, Sir Alexander Hamilton's 2 villa just outside Topsham on the Exeter road. It then marched around the town, visiting the houses of country gentlemen of the parish, led by a band playing patriotic music. Taking a break from 2-4 pm, it then reassembled in the town itself

At four o'clock the whole procession ... arrived at a roomy space, in the middle of the town, intended for the new market-house: here the effigy was very properly addressed by a person who attended for that purpose: Thomas Paine's execrable book, entitled the Rights of Man, with some other publications of the same nature, and a handbill which had been dispersed among the inhabitants, to endeavour to dissuade them from shewing their loyalty, and their hatred of Thomas Paine, in the manner here mentioned, but which encountered universal and deserved contempt, was first burnt by the hands of the executioner, and then the effigy was hung in the usual manner, amidst the shouts and acclamations of the surrounding populace; upon its being cut down the men under arms fired a volley, and the acclamations were repeated.

The effigy was then conducted to a point of land ... where ... after being put in chains, [it] was hung upon a gibbet 50 feet high, where it is likely to remain a monument of the people's loyalty, until destroyed by the injuries of time, or the elements. The men under arms then fired another volley, and the people sung, and the band played, God Save the King; a hogshead of cyder was distributed amongst the populace to drink the King's health, when everyone dispersed as quietly, and as orderly, and as much satisfied in the morning, expressing to each other their sincere attachment to, and hearty resoluion to die in defence of their King and the constitution.


This event was followed by a junket at the Salutation Inn, presided over by the Reverend James Carrington, for army and navy officers resident in the town, and other gentlemen of the town. The overall turnout for the procession is described as:


Carlile's commentary, written over two decades later, is extremely hostile, calling the people of Topsham "stupid, ignorant and brutal ... in thus dealing with a man and his book". This is rather unfair in hindsight, as it's doubtful the ordinary inhabitants of Topsham were the movers of this event. 4000 soldiers in town is a big incentive to smile and go along with it. The account Carlile quotes was sent to The Weekly Entertainer by an "A.B." whose identity we'll probably never know. It spins the event as an undisputed expression of popular sentiment, but Crowds, culture, and politics in Georgian Britain (Nicholas Rogers, Oxford University Press, 1998) notes that such burnings were strongly stage-managed by loyalists to target disaffected areas - though they kept away from major hot-spots - such as the textile districts of the south-west, the mining districts of Somerset and Northumberland, and the cotton district of Manchester. (Ian Maxted's Exeter Working Papers in British Book Trade History 51 mentions the focus on Devon, with burnings taking place "in Chagford, Newton St Cyres and Okehampton on 20 December 1792 and at Rewe, Netherexe and Huxham on 14 February 1793").

Disaffected working classes had been at the core of previous revolutions, and the establishment wasn't taking any chances.

Some of the effigy burnings of Paine were clearly political interventions designed to offset the contagion of radicalism amongst potentially sympathetic workforces. In some of the Wiltshire and Dorset towns, for example, the burnings were sponsored by the military as a morale-boosting exercise. Captain Crawford of the Queen's dragoons reported to the Home Office that he had ordered mock executions of Paine to counteract the disaffection that the troops had encountered in local pubs and markets.
- Crowds, culture, and politics in Georgian Britain, p.204


It would be interesting to know how many of those attending the Topsham excursion were local and how many loyalist rent-a-crowd: 4000 foot amounts to a massive show of force in what was a strategic port town. See pp144-5, Thomas Paine: social and political thought (Gregory Claeys, Routledge, 1989) for other accounts of Tom Paine burnings, including ones known to have been sponsored with money and/or beer.

Richard Carlile, by the way, is also of Devon interest. A radical who campaigned strongly for universal suffrage and freedom of the press, he was born in Ashburton. His Sherwin's Weekly Political Register gave the first published account of the Peterloo Massacre. He wrote his journal The Republican from Dorchester Gaol where he was imprisoned, for blasphemy, blasphemous libel and sedition, for publishing the works of Tom Paine and other anti-government material.
1. Here's an example of the publication from 1783: The Weekly entertainer; or agreeable and instructive repository.
2. Effectively the local squire, who had served as High Sheriff of the County of Devon in 1786. 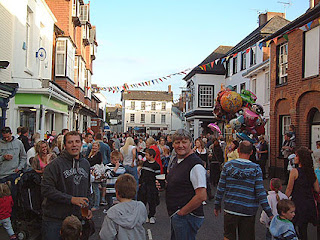