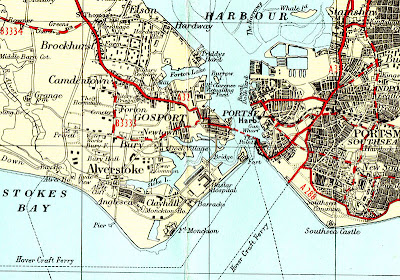 I found a very nice little curiosity, the map of the Isle of Wight and Solent area pictured in part above:


The curiosity aspect is the strange cartographic mix. The price obviously places it post-decimalisation (i.e. post-1971) and it features routes for the Isle of Wight car ferry and hovercraft ferries; yet much of the cartographic detail is pre-1850s. For instance, Gosport (above) is shown prior to much of its suburban development, as well as the building of its railway (disused by the 1970s, but the track still prominent) and the line of Palmerston forts from Stokes Bay to Elson, dating from the 1850s. The area of Newport, IoW, is likewise way out of date, showing an area between Newport and Carisbrooke called New Village that was completely swamped in the late 1800s surburban development of Newport. All the cartographers appear to have done is drawn modern ferry routes, red lines on roads, and a few location names (note the amateurish typeface on the "Harb." representing Portsmouth Harbour Station) on a map over a century old.


The makers of the map are credited as Johnston & Bacon (a division of Geoffrey Chapman Ltd), and a glance at Google shows Bacon's Large Scale Map of the Isle of Wight to have been in print at least as far back as 1900. I can imagine the financial motive in avoiding unnecessary revision, but I can't fully imagine what was going through their heads, cartographically and commercially, to carry on doing so well beyond the point of the map becoming weirdly and obviously inaccurate. Johnston and Bacon were absorbed into Bartholomew's shortly after: one might say not before time, if that was their idea of mapmaking.

I guess there's a lesson there in not believing historical data points without corroboration. he proverbial "New Zealander" finding this map in the ruins of London 500 years from now might well believe it to represent accurate geography.

PS: I just found at the Charles Close Society for the Study of Ordnance Survey Maps a paper, The rivals: notes on some intermediate-scale commercial topographic map series of Britain and Ireland since 1868, that bears out my impression of Johnston & Bacon. It says of G.W. Bacon & Co.:

This celebrated or (to collectors) notorious firm of map-publishers ... reissued OS mapping, photographically copied, and with some cosmetic alterations, notably added emphasis to railways and stations, rewriting of town names (often in bold lower case rather than the OS’s capitals) and colouring of main roads ... Perhaps the firm were enabled to ‘get away with it’ because they invariably used superseded OS mapping.