Sidetracking from Sydney Whiting's Heliondé: or, Adventures in the sun, I find he wrote a variety of slightly eccentric reflective works: an anthology of poems (Poems, 1873); A Literary Mélange of Prose and Verse (1846, volume 1 / volume 2); and Memoirs of a stomach: written by himself, that all who eat may read (1853).

The last is quite readable, the stomach being used as a vehicle for Whiting's droll heavily-footnoted excursions (reminiscent of Cecil Torr's) into a variety of topics: diet, history, medicine (such as mainstream v.s homeopathy) and more. It's also quite unusual, as stomachs usually only get bit parts in fiction, such as the chapter About Sir John Fastolf's belly and his rat in Robert Nye's brilliant Falstaff. This got me looking for more, and I found two strange books on a theme long pre-dating its appearance in the film Fantastic Voyage 1, its Asimov novelization, and the spoof Innerspace. 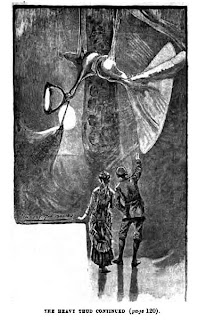 Travels in the Interior, Or, The Wonderful Adventures of Luke and Belinda (Luke Theophilus Courteney, Ward and Downey, 1887, Internet Archive travelsininteri00courgoog) is a didactic adventure in which two medical students and the sister of one get shrunk (or possibly think they do, in a mutual hallucination induced by a Baghdad sweetmeat given them by an old woman) and travel down their Uncle's alimentary canal, with a side excursion to his inner ear, down into his stomach and as far as his duodenum, finally escaping via a vein through a pimple in his neck. The pseudonymous Courteney introduces the story through the fiction of a London physician having found the manuscript in his waiting room. The Athenaeum reviewer didn't think much of it: "One can hardly tell whether the writer's object has been to temper instruction with jocularity or to heighten waggishness by professional details".

No one who has ever stood where Belinda was, will have any surprise at her delight at such a sight after emerging from the long, dark passage. The room, or cell, was of an irregular shape some thirty yards long, twenty high, and only about ten broad. It was lighted by a huge oval window, which occupied nearly the whole of one side, glazed with some semi-transparent material that admitted a " dim religious light." On the opposite wall were two very pretty windows, one oval and the other round, each about eight yards across.

The special feature of attraction, however, was a most remarkable chain of bones that, suspended by slings from the roof, stretched right across from the huge window in the outer wall to the oval one in the other. These bones were most curiously shaped (one of them being a perfect stirrup), and were incessantly shaking and rattling as if they had the palsy. Picture these, entirely covered, together with the whole cell, with an exquisitely delicate shade of pink velvet, having a very long, silky pile, which, in constant motion, kept incessantly reflecting ripples of silvery light from Luke's lamp, and we shall have some faint idea of what this Robinson Crusoe and Lady Friday were gazing upon.

But if what met the eye was lovely, the sounds that reached the ear were enough to fill the listener with awe. The heavy thud (which had attracted Belinda's attention at first, and sounding like a huge steam-hammer) continued with perfect regularity on the roof overhead, and the roaring rush, like Niagara, beneath their feet, sounded absolutely overwhelming.

"The thumping overhead is the pulsation of uncle's brain, which beats just like the heart, and the rushing under our feet is the sound of the great carotid, which is one of the four arteries by which the whole brain is supplied with blood."


Rather more surreal, there's Through the Alimentary Canal with Gun and Camera: a fascinating trip to the interior (George S Chappell, Frederick A. Stokes Co., New York, 1930). Chappell, followers of JSBlog may remember, is the author behind the Walter Traprock exploration spoofs - see South Sea shenanigans and To the poles! - and Through the Alimentary Canal etc is altogether funnier than Travels in the Interior. Unfortunately it's too recent to be online in full, but a solid excerpt can be previewed in JB Mussey's The Cream of the Jesters

1. Itself almost certainly inspired by Joseph W Skidmore's story A World Unseen (Wonder Stories, April 1936) in which the brilliant millionaire scientist Donald Millstein uses his "atomic reductor" to travel inside the bloodstream of his girlfriend Joane Cromwell to remove from her spine a bullet fired by a minion of his nemesis, the mad scientist Verensky. (Science-fiction: the Gernsback years: a complete coverage of the genre magazines ... from 1926 through 1936, Everett Franklin Bleiler, Richard Bleiler, Kent State University Press, 1998).