My project for 2010: to read the works of Maxwell Gray.

Over the Christmas holiday I read one of her later novels, Unconfessed, which wasn't at all bad. Unconfessed is one of her several novels set in a mildly fictionalised Isle of Wight (Newport, for instance, becomes "Oldport"), and the main action is set in the "Back of the Wight", the sandy farmland sloping down from the central chalk downs to the Island's treacherous south-west coast. The central location is "Brookwell", which seems to be a portmanteau of Shorwell and Brighstone. 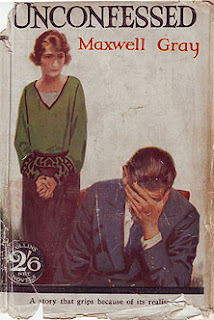 Andrew Thearle was rich and highly respected, but both wealth and reputation would have vanished utterly had the truth about the crime by which he had secured his wealth been known. As his wealth increased so did the burden of the sin he dared not confess. Back into his life came Kit, his younger brother and double the victim of Andrew's treachery for he had not only robbed him of his inheritance, but also of the girl he loved. But retribution was waiting for Andrew Thearle, and the story ends with Kit happy and prosperous. Unconfessed is a story that grips because of its realism and charm, and its admirable characterisation. Andrew in particular is a splendidly created character, and the whole book is readable in the highest sense of the word.


Revision: this post, in much expanded form, has now been incorporated into my book A Wren-like Note: the life and works of Maxwell Gray (Mary Gleed Tuttiett). See the official site, www.maxwellgray.co.uk