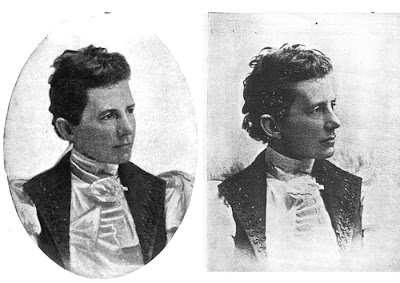 Newport Libraries - particular thanks to Brighstone Library - just kindly sent me a copy of the biographical page for Maxwell Gray in Poets of the Wight: an anthology of Vectensian poets, namely of poets native to or otherwise identified with the Isle of Wight, with selections from their work and prefactory introductions and portraits, Charles John Arnell, County Press, 1933.

I was actually looking for confirmation of some biographical details that I couldn't hack with Google Books, but a bonus was the photo of Miss Tuttiett (above right). It clearly was taken at the same photo-shoot as the previously featured one at the left, which comes from The Bookman, March 1896. They're approximately a stereopair.

Although primarily a novelist, Mary Tuttiett wrote a number of poetry anthologies: Westminster chimes and other poems (1890); Lays of the Dragon Slayer (1894); The Forest Chapel and Other Poems (1899), and England's Son and Other Poems (1910). They got generally lukewarm reviews, to the effect of "highly competent but not inspired". For instance The Times, Saturday, Jul 08, 1899, said of one book:

"Maxwell Gray" can hardly be proclaimed—if we are to judge her by The Forest Chapel and Other Poems (Heinemann)—so good a poet as novelist. Still, her book of verse is by no means without merits. She writes melodiously and occasionally with distinction, though she lacks the inspiration that gives fervour and life to really poetic utterance. She is at her best in such pieces as "The Hallowing of Westminster" which has positive qualities of beauty and imagination. All the verse is thoughtful and cultivated, and "Maxwell Gray" hardly does herself justice when she speaks of her "simple tedious strain." Tedious is too hard an epithet to apply to it.


I'm just reading England's Son and Other Poems, and they're highly variable, from astonishingly jingoistic poems about the Boer War (rather akin to Jessie Pope's pro-recruitment poems in World War I), via extremely polished Italian sonnets about love, bereavement and classical themes, to one in praise of her cat.

Update,  7th February 2011
See Poets of the Wight for an update on the book, which is now on the Internet Archive.