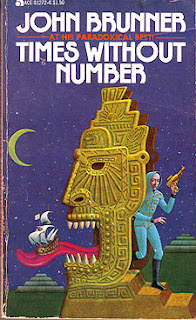 I've been re-reading John Brunner's 1962 Times Without Number - an example of the many excellent books that are out of print. It's a take on the SF set-piece of a time-travelling empire: a world in which the Spanish Armada wasn't defeated and in 1988 the world is dominated by a Spanish Empire under His Catholic Majesty Philip IX. Time travel (but only into the past) has been discovered, and is closely guarded by a Jesuit-like order, the Society of Time. Its research use is intermingled with the ritual: inaugurated Popes are taken back to see Jesus (from a safe distance where their presence won't interfere with Biblical events), and one of the Society's sacraments is a mass attended by all its members, past and present.

It rapidly becomes clear that this setup is an extremely shaky edifice, revealed progressively though the three novellas forming the book (a  revision and expansion of the 1962 Ace version, itself a compilation of segments that first appeared in Science Fiction Adventures). The first introduces the hero, Don Miguel de Navarro, as he investigates the illicit removal of a golden Aztec mask from its maker's workshop in the past, and finds there is considerable corruption in the use of the time apparatus. In the second, a royal reception is disastrously interrupted by the appearance of a group of lethal Amazon warriors from the court of "King Mahendra the White Elephant" in an alternative timeline. This forces the revelation to Don Miguel that the Society of Time conducts dangerous secret experiments in altering the past, then changing it back. In the third, Two Dogs, a disgruntled nationalist from the Mohawk Nation, threatens to break the Treaty of Prague - an international moratorium on time warfare - putting the whole fabric of the Empire at risk by striking at its key historical event, the Armada.

As I said, the basic time-empire premise isn't wildly uncommon in SF, and this is essentially a paste-up pulp SF novel. But Brunner puts a superior spin on it, not least through the implied comparison between his world and the real one. There is, for instance a deep irony in that we know that the Mohawk Nation fared considerably worse in the future Two Dogs wants (in fact our real-world history) than in the Times Without Number one, where it retains far more of its culture as an ally of the Spanish Empire. There's even the suggestion that a time war may already be happening; like one or two other reviewers, I strongly suspect that the enigmatic "Earl of Barton" who masterminded the Armada's success might himself be from the future. Nor is the ending entirely closed.


The variants in cover art are interesting. Personally I find the 1969 Ace one (main image and above right) the best of the bunch. Of the other Ace editions (see Coverbrowser.com here and here) the one of the Conquistador in the time apparatus - in the book this is a lattice of iron and silver bars - with the golden mask vaguely shown behind, isn't bad; the one showing what appears to be an Aztec warrior among badly-organised washing poles is pretty lame (as is the Beware of the Masters of "If" teaser used for both). The Hamlyn one focuses on the Amazon warrior episode, though completely inaccurately, as in the book they're not Goth Satanists; one in the book wears skimpy blue feathers, yellow skin-paint, beaded wristbands and red shoes (indeed it's hard to see why Ace, specialists in lurid covers, didn't spot the opportunity). The Ballantine Roman-on-a-racehorse one loses the plot completely.