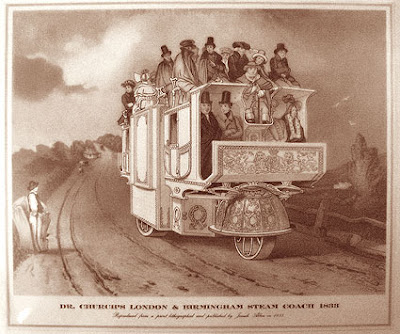 Having touched on the topic of road trains in the Pavane post a couple of years back, I've kept meaning to check out the background of the excellently steampunk vehicle, Dr Church's London and Birmingham Steam Coach, depicted in the above print. The image proves to be quite widespread; see, for instance, the Science and Society Picture Library page - Picture Reference: 10420391 - whose caption says:

Engraving by Josiah Allen after John Cooke showing the steam carriage designed and built by Dr Church of Birmingham in 1833. The carriage operated on a daily basis between Birmingham and London, at an average speed of 14 miles per hour. It had an unusual design, with three solid wheels, and could carry 44 passengers, 22 inside the carriage and 22 outside. Steam-powered coaches operated between various English towns between 1820 and 1840. The increased popularity of the rapidly expanding railway network, as well as opposition from operators of horse-drawn coaches, who physically blocked roads and persuaded the government to impose crippling tolls, was largely responsible for driving the steam coaches out of business.


The Science and Society Picture Library has another nice image -Image Ref. 10420069 - showing the machine in profile.

However, looking at more contemporary sources, it appears that Dr Church's coach was never a going concern. The couple of decades after 1820 were indeed a boom time for steam road travel, and the London and Birmingham Steam Carriage Company (formed in 1832 "with equal parts confidence, conviction and capital" 1) was one of many companies formed or projected to work steam carriages. "Dr Church" was William Church, a Vermont-born American inventor who had already devised an innovative typesetting machine. After moving to Bordesley Green, Birmingham, he took out a number of patents including ones pertaining to steam transportation (see Birmingham City Archives). Even at the start, there were doubts: in June 1832 a Mr "JHB" wrote to Mechanics' Magazine ...

Allow me, through the medium of your useful Journal, to ask the projectors of the " Birmingham Steam Carriage Company" ... if they have ever made any trial of their machine, either on a turnpike or other road. I am an inhabitant of Birmingham, and have heard a great deal said of the merits of Dr. Church and his new invented carriage, and what it it capable of doing, hut I canuot find on what road any experiment has ever been made to satisfy the public that it is capable, as alleged, of "taking a weight of fifteen tons fifteen miles an hour," and of "ascending any hills upon the turnpike-roads." ... I think the public should not be entrapped into a delusive scheme before the machine in question has had one public and decisive trial.


... and in November 1833 a "Junius Redivivius" sent to the same magazine a sarcastic but essentially sound critique - The Steam-Carriage Projectors - of the likely accuracy of the print, such as the inadequacy of the steering mechanism and the inaccurate proportions of the passengers to the supposedly eight-foot wheels.

William Fletcher's 1891 History and Development of Steam Locomotion on Common Roads (Internet Archive cu31924022808731) tells what happened next (see pages 104-107): the demo didn't take place until 1835, when it made it three miles down the Coventry Road out of the factory and sustained damage turning. In 1836, a number of publications carried the news (undoubtedly advertorial) that everything was fine:

We have much pleasure in stating that Dr. Church has at length completely and satisfactorily accomplished the construction of a steam-carriage, in every way suited to run on ordinary roads ... We have only space to say further, that the Birmingham and London Steam-carriage Company, with whom the Doctor is connected in this invention, are perfectly satisfied with the carriage as now completed ; and though alterations and shght improvements may and will necessarily be adopted in the future exercise of the plans, yet they deem the present carriage to be so fully effective and satisfactory, that they have advertised for a practical engineer to superintend the erection of a sufficient number of these carriages at their works, exactly according with the model produced.

We understand it to be the intention of the company to establish three stations between London and Birmingham for their trains of carriages to halt at, and to supply a fresh locomotive engine at each station, in order that the engines, after running about twenty-six miles, may be severally examined, and such little matters as cleaning, oiling, and adjusting parts attended to: which arrangement will avoid subjecting passengers to the inconvenience of delay, and tend greatly to prevent accidents.

We have only to add, that having witnessed the manner in which this carriage performs its duty on the public road, we have no hesitation in saying that we are now statisfied steam may be safely, and, we believe, economically employed, in connexion .with Dr. Church's improved machinery, as an effective substitute for horses, in the ordinary transit of stage-coach passengers on all the turnpike roads in the kingdom.
- page 386, The London Journal of Arts and Sciences, 1836


But as History and Development of Steam Locomotion on Common Roads says, it never happened. "This scheme was never practically accomplished; the carriages were constantly brought out, and as constantly failed". The proposed details of the London-Birmingham service, however, have trundled on as a factoid until now they've become repeated as fact.

Thanks, Ray Girvan, for exposing the "Dr" Church steam carriage "vapourware" (I don't believe he was any kind of doctor). The false story of a daily 14 mph Birmingham – London service has become a ubiquitous internet "meme". The London and Birmingham Steam Carriage Co (LBSC) was projected in 1832 with a capital of £200,000 in £20 shares, allegedly over-subscribed. The chairman was colourful Birmingham financier and pioneer alderman Henry Van Wart (1784-1873) who like Church was American-born. It is alleged that LBSC was established by act of parliament, but it seems rather to have been established by an "indenture or deed of settlement" dated 3 Nov 1834. The company was dissolved by its directors on 11 May 1837, as is announced by aptly-named LBSC secretary W R Kettle in the only London Gazette entry relating directly to LBSC. There is only one other London Gazette entry (13 Jan 1837) that mentions LBSC. This relates to bankrupt "button and military ornament manufacturer, dealer and chapman" Joseph Phipson, whose "shares and interest" in LBSC were part of the assets under consideration.


Thanks very much, Peter. The false story is presumably given weight by the Science Museum endorsement of appearing in the Science and Society Picture Library image caption.

A road not taken

The whole area of steam road transport is an interesting, if geeky, historical "road not taken". The idea was promising, but one fighting against a mess of social, financial and technological factors, of which a major one was the perceived cost of maintaining roads torn up by these big heavy machines. Whether Dr Church's setup was scammy or just ill-planned, there were a number of ventures that worked well, such as that of Gurney and Dance - but they were scuppered by crippling tolls on steam vehicles adopted in 1831. In 1836, a parliamentary bill supported by Gurney ("An act to repeal such portions of all acts as impose prohibitory tolls on steam carriages, and to substitute other tolls on a equitable footing with horse carriages") was passed by the House of Commons, but failed in the House of Lords. The later Locomotive Acts maintained the situation.

There are plenty of good books on the era. A few samplers: