John Petty and The Last Refuge 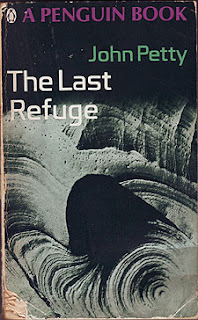 The chewed-up cover (right) is from the 1968 Penguin edition for his 1966 SF novel The Last Refuge. The cover image, featured on The Art of Penguin Science Fiction site, is "by Richard Hollis, using a detail from a photograph by William Garnett in Geology by William C Putnam, Oxford University Press, 1964".


What little information I can find on the Walsall-born Petty is at David John Hodgkinson's Brownhills site, Local writing and personalities section. Petty had a hard life. He joined the army at 17 and deserted, after which he went to London, spent time homeless, and worked in a hospital. In 1939 he re-enlisted (and spent 84 days in detention for his desertion) before being discharged after a year as medically unfit. He worked as assistant foreman in a Bombay foundry until he had a mental and physical breakdown (he had tuberculosis) and spent years as a scrap-picker on Walsall slag heaps. Nevertheless, he managed to write four novels. His first, the autobiographical Five Fags A Day (1956), was set among the scrap-pickers of Walsall. The next, A Flame In My Heart (1958), was a tragedy about a working man who develops an incestuous attraction to his daughter. The Glasgow Herald wasn't impressed:


... a disppointment from John Petty, the proletarian author of Five Fags A Day. There is a Laurentian challenge in its theme—the struggle against incestuous desire of a Midlands brass founder—which the author lacks the skill to uphold. Obviously not entertaining, this novel fails likewise to carry conviction as documentary or moral tract.
- The Glasgow Herald, 19th June 1958.

There was also The Last Refuge (1966); and The Face – an autobiography (1972). Of these, Five Fags A Day looks most worth finding; reviews described it as well up with Orwell's The Road to Wigan Pier as an authentic account of working-class hardship and the post-war wasteland of Walsall:


The road had for long been the worst part of the town. Once it had festered with life, but slum clearance schemes had flattened the black banks and buttressed cliffs, the crouching hovels and cracking cenotaphs of Victorianism, had demolished the terraces and tenements, taken away the black-shawled grannies, the doss-houses and loungers and knots of slatterns, the yelping dogs and mangy cats and mobs of children, the rag-yards and hawkers, the drunks and didicais, the pawnshops and paupers, and all that remained between the rubble and wide open spaces were a couple of factories, a pub and one small block of houses-and the scrap-yard.

A quick dip into the Google Books preview (click on any of the keywords here) finds more snippets showing him to have a very clear and literate authorial voice.

The Last Refuge is distinctly polemical dystopian SF. The cover blurb to the Penguin edition:


James Muller is a relic — and a danger to the state.

For he was once a writer. And people remember...

Even people drugged by the calculated sensualities that keep the peace in despotic, post-H-bomb Britain ... the naked, state-employed streetwalkers, the bugged bedrooms, the subtly staged depravities...

And because he is a danger, he is given the most terrible punishment the new scientific society can impose — freedom.

This is X-certificate SF, by an excitingly new and original talent.

The novel is set in a concreted-over England afer a nuclear war in the 1970s, and begins with its writer protagonist being evicted from his house (he lives in a run-down district of the few remaining conventional houses) prior to its demolition for some unspecified State project in what is now the population centre of "Wapshaw". After assessment by "the Superintendent" he is sent to Block Y, a State centre whose aim is ostensibly to re-educate dissidents, where he is further quizzed on his attitudes as a "Working class writer. Reactionary. Violently opinionated and rebelliously inclined".

The system at Block Y proves to be generally corrupt, with inmates drugged and forced to perform sexual shows for the guards. Muller escapes this after the elderly prostitute he is about to be paired with, Kitty One-Eye, breaks loose from the guards and has to be killed after she shows her defiance by stabbing a doctor in the eye. Muller is assigned a dull office job, and further questioned about his reactionary attitudes and social idealism. He meets a sympatico fellow-prisoner, McAllister, with whom he attempts escape, but the pair are recaptured and McAllister taken away and also killed.

Jallen, a high-ranking official, explains the situation to Muller. His reactionary wishes are pointless; England has been totally contaminated, food only produced by industrial process, and - however corrupt it may be - the precarious survival for the remaining population is only maintainable through an authoritarian system. Jallen concludes that Muller is incorrigible, and if he wants to see what freedom is like, he can have it, and see how he manages to survive in the foodless wilderness outside the towns.

Muller is giving a driving lesson and allowed to leave Wapshaw by car, monitored by "Blips", armed aircraft; wanting to see the sea, he drives north on the R3 road toward Rhyl. When he stops to rest, a married couple also travelling - a few elite are allowed to travel between towns - recognise him as "the famous writer James Muller". They have been to the R3 leisure camp (a Butlins-like facility) and tip him off that he could impersonate Sims, a man they have seen being taken away ill from a chalet near theirs. Muller manages this, stealing some food before driving into the wilds of North Wales, where he crashes his car.

Muller hides in a crevice near the car wreckage, and when Jallen arrives with a land-based search unit, manages to steal Jallen's faster car and escapes to the coast. As he disposes of the car over the cliff, there's suddenly a noise from the air. "The Blips dived, their rockets blazing". The End.

The whole book has a strong similarity to Orwell's 1984 in the general shabbiness of setting; where 1984 was a satire on 1948, The Last Refuge is also more or less a satire on the 1950s, when slums were being cleared and Brutalist new towns replacing them. The R3 leisure camp, with its drugs, prostitutes and regimented bonhomie, is a beautifully vicious satire on the 50s holiday camp. Jallen's conversations with Muller strongly recall those between O'Brien and Winston Smith, but in many ways Jallen's defence of his society - however horrible that society - is strangely sympathetic. Its tightly-managed culture and its deliberate fostering of lack of emotion is not from an Orwellian love of power/control for its own sake. It comes of a strict pragmatism forced by external factors; the post-war infrastructure is so precarious that nothing disruptive or sentimental can be permitted. (A weakness in this argument, admittedly, is why then they bother expending so much in effort and resources on Muller).

However, the central metaphor is of the writer and visionary made an outcast in a changed and run-down post-war West Midlands, and that theme is highly autobiographical. If the book is representative of the author's mindset, Petty comes across as an author of real talent, who had endured real hardship, but who neverthless had a real chip on his shoulder about being unrecognised in his home town. On the dustcover of The Face, he said he came from The Potteries.

See also John Petty: The Face (His autobiographical account of his scrap-picking days) and Petty gripes (his own words on his experiences as a writer, and a little about the ensuing dispute with his friend Harry Brindley).