The Reproach of Annesley 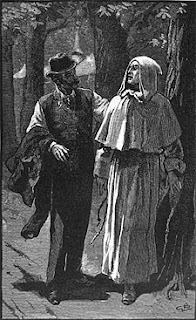 Another Maxwell Gray (Mary Gleed Tuttiett) book read: her third novel, and the second after The Silence of Dean Maitland that made her name: The Reproach of Annesley. The "reproach" of the title is the stain of unresolved accusation.

Like Dean Maitland, it's primarily an Isle of Wight novel written when Mary Tuttiett lived in Newport. Serialised in 1888/9 and published in 1889, it's a melodrama surrounding a romantic quadrangle - three rival suitors for one woman - taking place in the five years or so before 1871 (the date pinpointed by a reference in the final chapter to civil war in Paris, which would have to refer to the overthrow of the Paris Commune). The central location is "Arden" and its manor house and surroundings - highly recognisable as Arreton - with "Medington" (Newport) and its "Red House" also featuring. "Arden Cross" is Arreton Cross, and the Gales' inn "The Traveller's Rest" is the Hare and Hounds. I can't find the "Gledesworth" that's said to be over the downs from Arden; I suspect it's just derived from the author's middle name. A couple of segments, as with the finale of Dean Maitland, take place in Western Switzerland and the Jura Mountains; these undoubtedly draw on Mary Tuttiett's personal experience, as she mentioned in interview - see previously - having visited Yverdon-les-Bains before she became a permanent invalid.


I have to admit I enjoyed the book, probably because I'm getting attuned to the conventions of Maxwell Gray and/or the three-volume Victorian novel. As with The Silence of Dean Maitland and Unconfessed, the first third of the book is devoted to setting up the conflicts and characters before anything major happens; not knowing this, it could come across as a little slow. Probably the weakest point for me was the predictability of some plot points: from the moment Paul's body isn't found, you know he isn't dead; and when Edward sees the apparition of monk looking exactly like Paul, in the very region he disappeared, who else is it going to be? I'm even getting to like Maxwell Gray's detailed scenery descriptions: although she's very prone to pathetic fallacy, using sunsets and gloomy weather as an emotional soundtrack to the story, the best of them are photorealistic. Take the introduction, describing the road over Arden Down:


The narrow, white high-road ran straight along the summit of the down; it was unfenced on one side where the turf sloped so abruptly towards a rich cultivated level as to make this almost invisible from the road, and on the other bounded by a bank, purple in summer with wild thyme, and crested by a high quiekset hedge, which effectually concealed the northem slope of the down and the wooded country beneath it spreading away to the sea. This thorn hedge, which, in default of leaves and blossoms, bore masses of thick and hoary lichen, instead of growing erect from its bank, running nearly east and west, was arched over to the north-east in an accurate curve, due to the fierce briny sweep of the prevailing winds, and was by the same agency smoothly shorn on the windward side. These strong salt winds, blowing off the sea and frequently rising to gales, give all the trees and hedges within their influence a marked family likeness, stunting their growth, and forcing them to bow to the north-east as if suddenly made rigid in the height of a south-west gale.

But the salt south-west was silent on this cloudy March aftemoon, and in its place a bleak east wind, whirling the white dust from the flinty chalk road, and quieting gradually down as the sun drew nearer the west, was sweeping over the short turf with its low, lonely sound, which is half whistle and half moan. The rich level to the south of the down sprinkled though it was with occasional farms, each having its cluster of ricks and elm-trees, and varied here and there by a village spire rising from a little circle of thatched roofs, looked solitary beneath. the grey sky. It terminated on the east in some picturesquely broken hills, interrupted by a long, level grey band, which was the sea, and on the south in more hills of moderate height and irregular outline, which derived an unusual grandeur this afternoon from the deep purple shadows resting upon them, and emphasizing their contour against the silvery grey sky, a sky full of latent light. On the west again there were hills of gentler outline, beyond these little glimpses of piain and woodland, and on tbe faintest limit a curving break filled with a polished surface of sea, reflecting the dim yellow lustre of the declining sun, which glowed faintly through the curdling clouds above.

The road is a metalled main road now, but the landscape is the same and you can even identify the rough location. Expand the Google Maps view below and have a look around.

Such scenes in Mary Tuttiett's books are clearly based on detailed personal observation, and she made the most of the few places she had been or could go (in later life when she was an invalid). This makes the books extremely interesting from a 'forensic' point of view; her biography isn't well-documented, but precise scenery provides good leads to where she had visited. On the other hand, it's painfully obvious when she gets out of her scope of knowledge. In The Reproach of Annesley, for instance, she seems to have little idea what a career soldier does; Edward appears to be permanently on leave.

The Reproach of Annesley was made into a movie in 1915 (see IMDb). The book itself is online at the Internet Archive (reproachannesle00tuttgoog: ignore the bad metadata saying it's only Volume 1).

The Reproach of Annesley is discussed in more detail in my book A Wren-like Note: the life and works of Maxwell Gray (Mary Gleed Tuttiett). See the official site, www.maxwellgray.co.uk