The death of Nelson 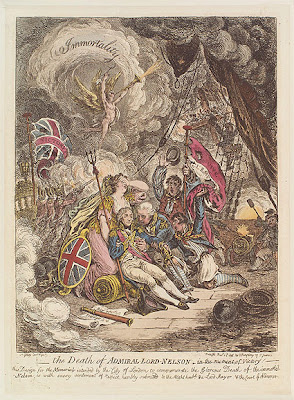 James Gillray's The Death of Lord Nelson in the Moment of Victory - listed in Robert Harding Evans's 1851 Historical and descriptive account of the caricatures of James Gillray as "A rather feeble attempt at celebrating the great battle of Trafalgar, fought on the 24th of October, 1805, in which Nelson fell in the moment of victory".

This is thoroughly unseasonal, it being nowhere near Trafalgar Day, but a couple of days ago Channel 4 repeated an excellent historical docudrama, Trafalgar Battle Surgeon:

This gritty and wry drama details the Battle of Trafalgar through the eyes of HMS Victory's surgeon, William Beatty, and his team on the lowest decks of the ship

This has been dramatised before, but Hardy Pictures, which has filmed a number of other equally good social history docudramas, produced one of their best here: a gripping combination of the tropes of modern medical drama and top-quality historical research (largely based on Beatty's own published account, Authentic Narrative of the Death of Lord Nelson (Gutenberg EText-No. 15233).

At the risk of being morbid, there are a number of other interesting accounts online about the death of Nelson: the timeline at aboutnelson.co.uk (which mentions the various posthumous preservation measures that led to the "tapping the admiral" myth); the Nature.com reprint Admiral Lord Nelson's death: known and unknown – A historical review of the anatomy (Spinal Cord (2005) 43, 573–576); and Medscape Today takes a "what if?" approach with The Case of the Fearless Mariner With a Mortal Chest Wound: How Would the Patient Be Treated Today? 1

It is, however, falling into a standard Great Men view of history to focus entirely on Nelson. Although the death of Nelson was central to Trafalgar Battle Surgeon, it also focused on the surprisingly effective treatment of other casualties and other interesting historical realities: it mentioned, for instance, women serving aboard British warships, that sailors were well-nourished, and the still-disputed phenomenon of death by "wind of ball"). 2 It rightly won the award Winner Royal Television Society Best History Film 2005.

Obligatory reference to literature: there was, unsurprisingly, a deal of ghastly poetry written about the event. John Leyden's overblown Verses on the Death of Nelson is fairly typical, and there are many more.

1. This paper mentions Nelson's previous injuries: as is mostly known now, Nelson hadn't lost his blind eye and didn't wear an eyepatch; we owe this entirely to Laurence Olivier's portrayal in Korda's film That Hamilton Woman.
2. One minor aspect puzzled me: why Nelson in the dramatisation doesn't speak, when accounts say he spoke clearly and audibly in the period before his death. It would have been quite difficult to find an actor with the correct physical attributes (i.e. age, appearance, correct arm missing), so maybe Robert Linge, the Gulf War veteran who played Nelson, has an inappropriate accent? Or do Equity rules still apply?
at 06:52